« Hobbiton | Main | Rotorua and the road to Wellington »

Dasher 360 at Autodesk University and the Forge DevCon

If my calculations are correct, I’ll be in Singapore during this year’s Autodesk University in Las Vegas. It’s the first I’ll have missed for many years – and it’s going to feel more than a little strange, when that week comes along – but this trip (and my family) will be taking precedence, for once. 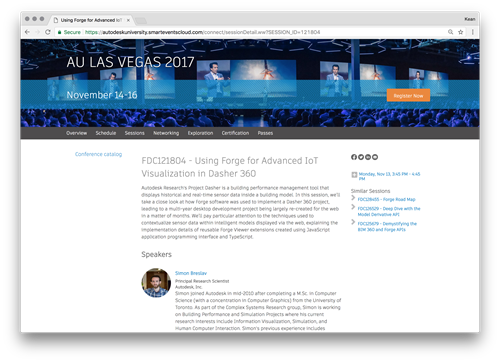 While I’m not going to be there myself, my good friend and colleague, Simon Breslav, is stepping in to deliver the class I would be giving if I were there. Although as Simon is the person who developed a great deal of the code being discussed in the class, he’s actually going to do a far better job than I would have. So if you’re going to be in Las Vegas and would normally have attended one of my classes at the Forge DevCon (which is happening just before AU 2017), then please sign up for this one:

The class is being aimed primarily at developers interested in how we used the Forge platform to implement advanced features – such as the ones we’ve created for Dasher 360 – but it will also be of relevance to people interested in the evolution of Dasher 360 itself: Simon will be demonstrating some cutting edge features he’s been working on while I’ve been touring the planet, including support for dynamic sensors and surface shading of models. Very, very cool stuff.

In preparing to take the lid of what we’ve done inside Dasher 360, Simon has prepared this shader toy that lets you play with inverse distance weighting – the technique we’ve used to interpolate sensor values inside our surface shading feature in Dasher 360.

For those of you who are more interested in just seeing some of the cool stuff Simon has implemented inside Dasher 360, here’s a robot with dynamic sensors and shading applied to the surface. This is really ground-breaking – we’re going to be able to use this technique to visualize data captured for all kinds of mechanical models.

I’m really looking forward to getting back into this project once I’m back. Simon’s been having way too much fun in my absence. :-)

And lastly, a little bird tells me that there’s going to be some cool stuff (relating to this project) on display during the Connect & Construct Summit, just before AU itself. If you’re more interested in BIM and Dasher 360 than in Forge – as it’s running alongside the Forge DevCon – then you might want to go along to this, to get a glimpse of what’s coming on that front. (As far as I can tell this is a similar event to the Construction Launchpad where I helped present Dasher 360 at AU 2016.)

Whatever you end up attending, have a great time in Las Vegas, those of you who will be there, this year. I’ll be raising a glass to you all from the other side of the world, that week!

I managed to forget to mention one more class that relates to Dasher 360: my friend and colleague, Alex Tessier, will be talking about how Dasher 360 has been an integral component of the Pier 9 Smart Bridge project during his Forge DevCon class on the Tuesday morning (this is also open for people attending AU, as far as I’m aware).