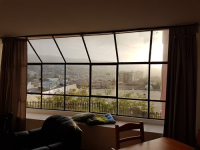 We had a choice to make for our last few days in Chile. Do we head straight down to Santiago, to explore the capital city, or do we take the opportunity to head down the coast and explore the nearby port of Valparaíso? A good friend back home talks about Valparaíso as being the other side of the coin to Santiago: artistic, bohemian, funky and more than a little grungy. That appealed more to us than spending more time in a big city – especially as if we come back through Chile, at some point, we’ll almost certainly be... Read more →

La Serena and the Mamalluca Observatory 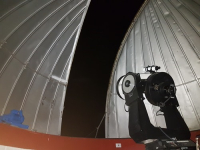 It would have been a shame to have come to Chile without a visit to an astonomical observatory: it’s one of very few countries in the world suitable for modern-day, ground-based observatories (i.e. it has the right altitude and low levels of light pollution). It’s the main reason we chose to head down the coast from Caldera to La Serena, as we could use that town as a base to visit the Mamalluca Observatory. This observatory aims at providing a great introduction to amateurs interested in astronomy: a great fit for our family. We arrived in La Serena during... Read more → After the excitement of the various deserts and salt flats we visited in Bolivia and Northern Chile, it was time for a break by the seaside. We’d decided to break our journey south to Santiago – from where we’ll be flying to Easter Island at the end of September – in a couple of places: Bahía Inglesa (a small town close to Caldera) and La Serena. We may yet also visit Valparaiso, if we have time, but that remains to be seen. We arrived in Caldera by a 12-hour bus ride on Thursday evening: we left at 7am from... Read more → 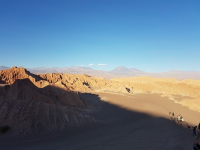 On Wednesday – our last day in San Pedro de Atacama – we celebrated our second son’s 11th birthday (I can’t believe how time flies) with an outing to El Valle de Marte (Mars Valley) to give sandboarding a try. It was really a magical location for any activity. After the sandboarding tour operator’s bus took us out to the desert, we chose our equipment (snowboarding gear that has largely seen better days). Here are my boots, for example. It took me a couple of runs to realise they didn’t fit the bindings that well because these were reversed... Read more →

We arrived on Saturday in San Pedro de Atacama by bus from Bolivia (the transfer was included in our tour of the Uyuni area). Interestingly the customs and immigration process wasn’t performed at the border: we had to stop and “be processed” on arrival in San Pedro. After that we endeavoured to find our Airbnb by foot, but given the lack of Google Maps data for the town, we quickly had to resort to phoning our host and having him send a van to the restaurant in which we’d taken refuge after schlepping our bags halfway across town. San... Read more → 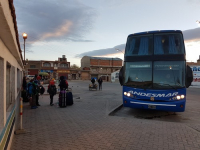 Our trip up to Bolivia was long but interesting. We started off taking an overnight bus from Salta up to La Quiaca (both of which are in Argentina). We arrived at about 7am, at which point we carried our luggage across into Bolivia and had our passports stamped. We were then in La Quiaca’s sister town of Villazon, on the Bolivian side of the border. We were prepared for it being a little quiet, so we headed to what seemed to be the town’s only hotel and asked for a room for the day: our train northwards to Uyuni... Read more → 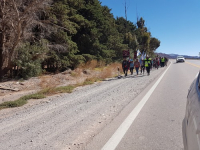 On our first trip outwards from Salta, heading north to the Quebrada Humahuaca – we were curious to see a group of people walking south towards the city. They had backup vehicles and even a police escort, but we didn’t think more of it than that. On the way back down we saw the same group, much further along, as well as other groups of pilgrims on bicycles. Pretty much the same thing happened when we headed south from Salta to Cafayate and then back: we saw several groups, some on foot, some on bikes, even some on horses,... Read more → 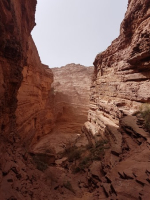 Our second side-trip from Salta (the first being the one up to Tilcara) was more southwards: we headed 200km along the amazing Route 68 to visit the town of Cafayate. Cafayate is well known for its winemaking, especially from the local Torrontés grape that only grows at altitude. It also has some of the most incredible scenery we’ve seen on this trip. On the way down to Cafayate the weather was really windy, and the closer we got, the windier it became. This meant we didn’t get to see all the wonders of Route 68. We did stop at... Read more → 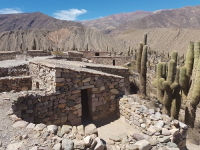 We thought the Cuestra de Lipán and the Salines Grandes were the best that this side of Salta had to offer: they were pretty spectacular, after all. We decided to visit the Pucará de Tilcara – a re-built, 12th century, pre-Incan settlement – and a village called Humahuaca thinking they’d be easy, gentle visits for our last day in the Tilcara region. We enjoyed the Pucará: it was interesting enough, although as we’ve been to Machu Picchu on this trip it was always going to be “just OK”. Many of the buildings had been rebuilt using traditional methods: Inside... Read more →

Salta and the Salinas Grandes 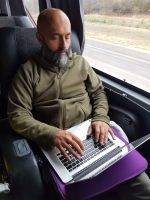 Since the last post, we took a daytime bus – lasting about 4 hours – from Tucumán up to Salta. This was actually quite nice, although at one point we sped past a traffic accident where I happened to look down into a burnt out car and saw the remains of the driver still in it. (Luckily I was the only one in the family who noticed this.) I admit it shook me quite a bit, especially as I get the feeling that such accidents aren’t all that rare, here. And given the fact we were due to rent... Read more → 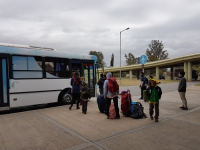 I wasn’t expecting very much from either Córdoba or Tucumán. They were originally just waypoints on the path to Salta and beyond. This is pretty much exactly what Córdoba ended up being: it’s a big, fairly unexceptional (in our view, anyway) city. For sure there are things we might have visited that would have improved our view of it, but we decided not to spend an excessive amount of time trying to discover another side of Córdoba: we focused more on the kids’ schoolwork and recharging our batteries after the more hectic days in Rio and Iguassu. On our... Read more →

We’ve been in Argentina for most of the week, especially if you count our stay in Iguassu (where we stayed in Brazil but ended up spending most of our time in Argentina). It’s probably a good time to reflect on some experiences between the two countries, before things blur even further. I enjoyed Brazil, but certainly felt we were more at risk there than in Argentina. This feeling might have been driven by horror stories friends (and the media) reported, but still – it was tangible, and I don’t believe at all misplaced. Luckily nothing bad happened, but the... Read more →