After the excitement of the various deserts and salt flats we visited in Bolivia and Northern Chile, it was time for a break by the seaside. We’d decided to break our journey south to Santiago – from where we’ll be flying to Easter Island at the end of September – in a couple of places: Bahía Inglesa (a small town close to Caldera) and La Serena. We may yet also visit Valparaiso, if we have time, but that remains to be seen.

We arrived in Caldera by a 12-hour bus ride on Thursday evening: we left at 7am from San Pedro de Atacama and arrived at 7pm in Caldera. 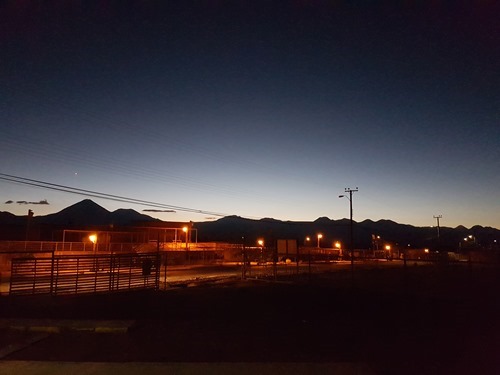 We expected the journey to be a lot worse than it was: it turned out to be quite relaxing and enjoyable. It’s the first time we’d travelled with Tur Bus – one of the main Chilean bus operators – and it’s generally a more relaxed way to travel than we found with Flechabus in Argentina: in both cases you can get your tickets online – selecting your seats, etc. – but with Tur Bus everything’s a little simpler: you get an internet discount, for instance, and then a code with which you can get your tickets printed at any Tur Bus agency. With Flechabus we were sent PDFs we then had to print out: this could be extremely cheap and easy (as was the case in Cordoba, where we had a printshop downstairs from our Airbnb where it cost us almost nothing to print our tickets) or annoying and (relatively) expensive: in the smaller towns the economics are different and so you end up paying much more. Still only a matter of a dollar or two, but often this was 10x the price we paid in the cities. It also seemed more complicated to check and collect bags as well as being more strict about tickets in Argentina (you had to enter passport or ID numbers when buying the tickets and these were checked when you enter the bus). 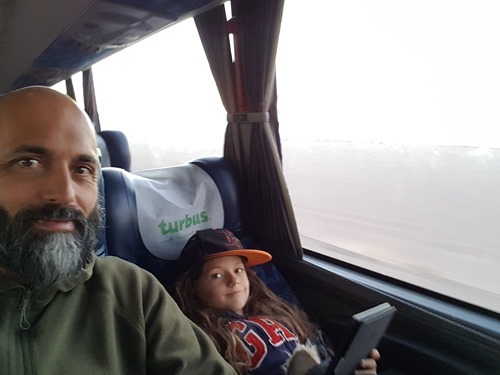 Another fun part of this bus journey was that our daughter managed to sleep nearly 8 hours of it. This was absolutely fine apart from one thing: the bus stopped for a lunch- and fuel-break in Antifagasta at around noon. Everyone was asked to get off the bus, at this point, but we explained that our daughter was fast asleep. The driver accepted that she could stay on, after he saw how “out” she was, but the rest of the family still had to get off. As we got off the bus the doors closed and it pulled away – I thought my wife was going to have kittens – although after about 10 minutes it reappeared on the other side of the bus station where it was refuelled. We stood there imagining Anokhi waking up to find a deserted bus… we kept looking to see whether she would plaster herself against the front window – like that scene from The Graduate – screaming “mmmuuuuuuuuummmmmmyyyyyyyyyyyyyyyyy!!!!!!!”. In the end the bus pulled back into its bay and we boarded to find her in exactly the same position as when we left her. She very much enjoyed hearing the story when she eventually woke up, too. 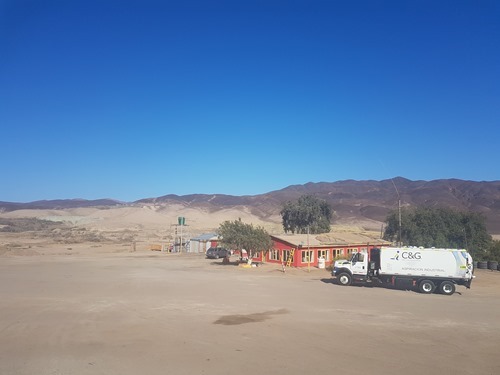 The drive through Northern Chile was interesting… lots of nice landscapes that were dominated by the mining industry. I saw lots of signs for Autodesk customers, as you might imagine. The towns we passed seemed also to have a major focus on mineral processing. Not the nicest places to stay, I expect, but very interesting to pass through. 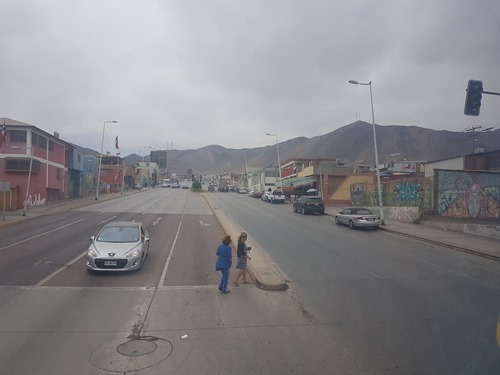 On arrival in Caldera we managed to hail a cab – that amazingly fitted all our bags and kids – to take us to Bahía Inglesa. We found our home (of four nights, a luxury to be settled somewhere for this long!) and went out for dinner. We seized the opportunity to have fish for the first time in weeks at the restaurant recommended by our hosts and hit the sack soon afterwards. 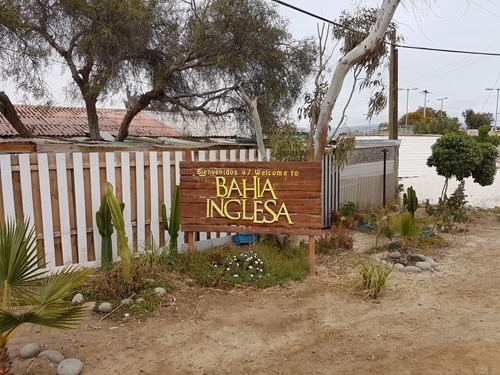 Our first full day in Bahía Inglesa was really the only time we saw the sun, so it’s just as well we took advantage of it to enjoy the beach. It’s a nice, relaxed place without very much to do, but that’s just what we needed. 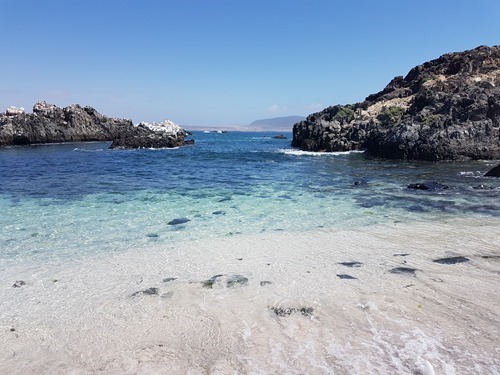 We found a solitary penguin on the beach. It looked lost and not very well – some locals told us that some specialists had come to see it and chosen to leave it be – as the nearest colony was some way up the coast. 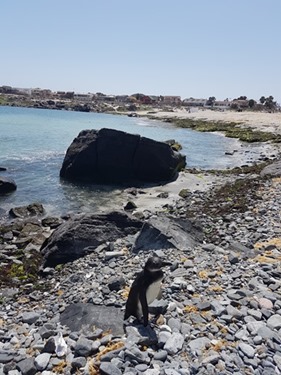 While Bahía Inglesa is mostly about its beach – there doesn’t appear to be any fishing industry here, as far as I can tell – you do get shellfishermen (if that’s a word) – who go around the houses with coolers full of scallops and something like abalones: the main local shellfish that live here. We bought and enjoyed fresh scallops for dinner on our first day.

On the second day I decided to head to Caldera to print the bus tickets for our next leg (that’s where the closest Tur Bus agency is, and as our next journey begins at 7:50am it won’t be open when we leave). I tried to find a local bus to get there – typically called “collectivos” in this part of the world – but was pointed to a “taxi collectivo”: rather than having full buses going between the two towns there’s a steady flow of taxis that are designated for shared use. You pay 1000 pesos (about $1.60) per person to get there. Which was quick and easy: the taxi dropped me very close to the Tur Bus agency, too.

After getting the tickets printed I wandered down to the port, as I could see the colourful boats and wanted to see if I could pick up some more fish. This went pretty well: a fisherman sold me a large quantity of a nice-looking fish for only 2000 pesos. I had no idea what the fish was – my Spanish is really basic – and it turned out to be boney but really tasty. 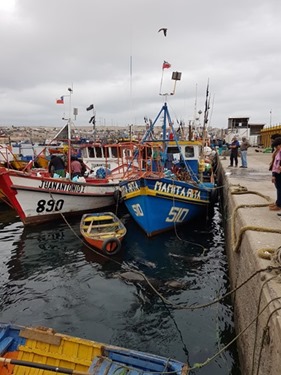 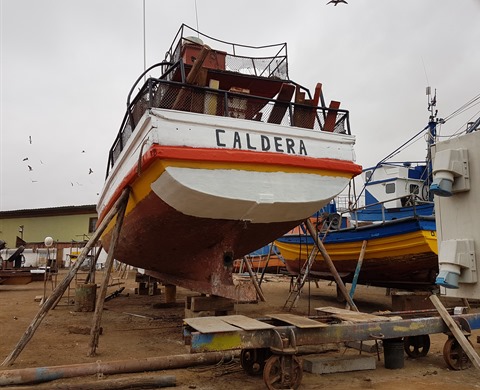 As an added bonus I got to see a dog interacting with some enormous sea lions that were hoping to pick up rejecta from the fishing boats. 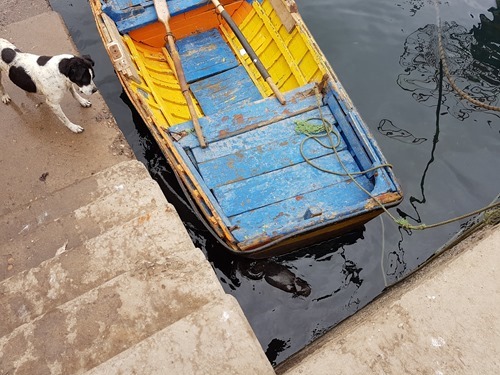 Here’s a video I shot of the scene:

After wandering back through town and stocking up at the local supermarket (which is a much better place to shop than the local minimarkets in Bahía Inglesa) I hopped back into a collectivo and headed home.

In the afternoon we wandered the other way around the coast for a while. We came across an area where the shellfishermen clearly clean their catch and discard the shells: 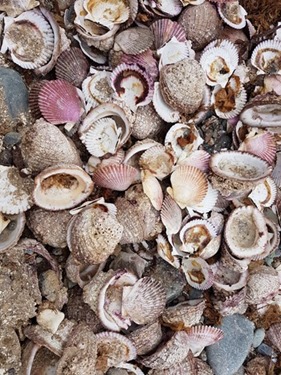 Somewhat spookily, we also saw the penguin again, nearly 1km from where we were before. Unless it happens to be another identical, solitary penguin, of course. 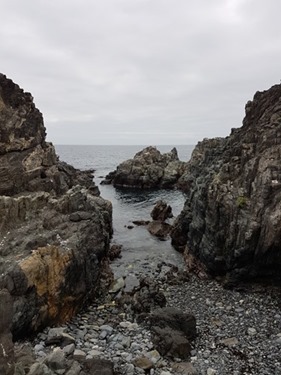 Today we’re planning to try the abalones – it turns out these are called donkey-hoof clams or “locos” locally – and tomorrow we head off early down to La Serena, another sea-side town from where we’re hoping to visit the Mamalluca observatory.