Our trip up to Bolivia was long but interesting. We started off taking an overnight bus from Salta up to La Quiaca (both of which are in Argentina). We arrived at about 7am, at which point we carried our luggage across into Bolivia and had our passports stamped. We were then in La Quiaca’s sister town of Villazon, on the Bolivian side of the border. 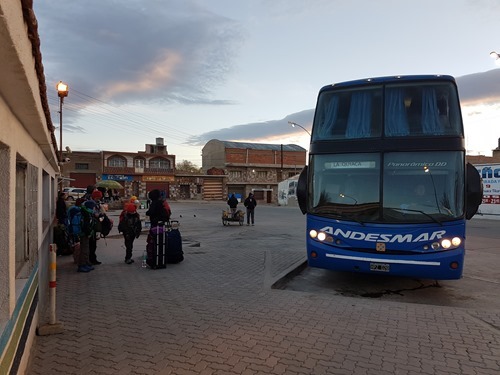 We were prepared for it being a little quiet, so we headed to what seemed to be the town’s only hotel and asked for a room for the day: our train northwards to Uyuni only left at 3:30pm. We were lucky: we took the last available family room and camped out there for much of the day, letting the kids catch up on sleep ahead of the next 8-hour journey to Uyuni.

We didn’t want to risk missing the train, so got to the station (which was devilishly hard to find… thankfully some fellow travellers from Germany had found it during a morning stroll, so we tagged along with them) a couple of hours ahead of the departure time. 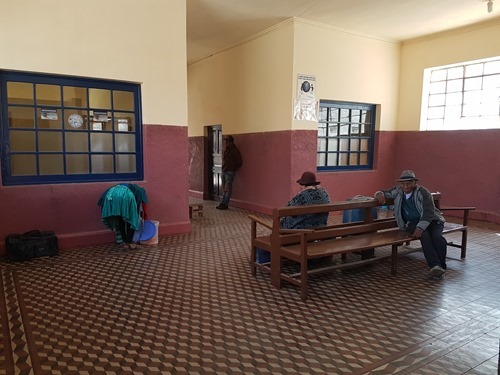 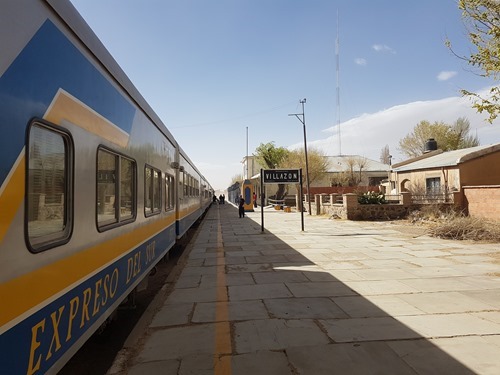 The train journey itself was really interesting: we’d bought first class tickets, given the length of the trip, so were quite comfortable. There was a large flat screen TV in the compartment, which is where things got interesting. To start with this was showing some Bolivian rock and pop videos, which were interesting enough. Then the MGM lion showed up, and we thought “great, let’s settle in for a movie”, until the film’s name was announced: “Predator”. Not the best viewing material for our kids! We managed to keep them occupied – and the fact it was dubbed in Spanish helped them ignore it – but it wasn’t ideal. Once that was finished the next movie started… “Predator 2”. Good grief. We struggled through the next 2 hours until we joked about what the next film would be… “Alien vs. Predator”, perhaps? Sure enough, that’s what came on. After the full Predator trilogy had finished I was sure it was time to transition to the Alien series, but thankfully a more gentle, Mexican film came on that was much more family-friendly: “Instructions not included”. I genuinely enjoyed that one, despite my modest grasp of Spanish.

Ignoring the entertainment, the scenery was just spectacular. It was really exciting to get an early taste for the Bolivian landscape! We were given meal vouchers as part of our ticket, so headed up to the restaurant car. It was then we realised the cabin staff were watching the same movies we were in another compartment (hence the film selection, presumably).

Our meals were simple but satisfying. It did shock us that the default drink was Coca-Cola. You could have other things (such as water or beer) at extra cost. This has been such a theme in this part of the world… Coke is *everywhere*. 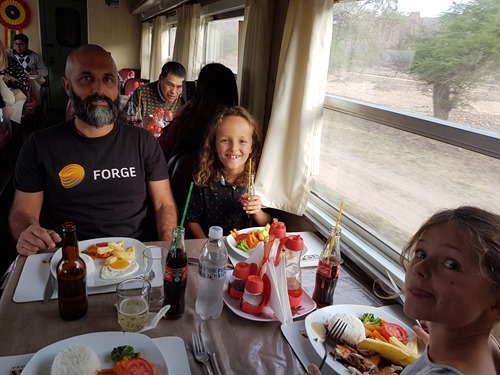 We arrived in Uyuni at midnight and walked a few blocks to our hotel. The kids were real troopers, as usual… they were absolutely shattered but managed just fine. By the time I slept it was 2am (I blame this on the Coke) and was awakened by a garbage truck playing really loud music at 5:45am. Noise is definitely cultural… this deserves a blog post of its own, though.

By 7am I’d given up on sleep, so decided to wander around Uyuni. It was market day, so I had fun wandering around watching the various stalls get set up. At 10am our car arrived – we packed up and headed off. 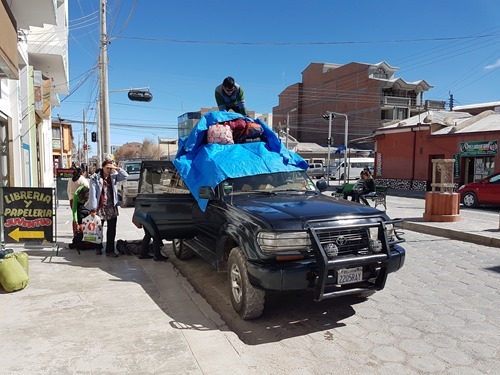 We started with a visit to the train cemetery in Uyuni, where old steam trains from the late 19th century are gently rusting away… very cool. 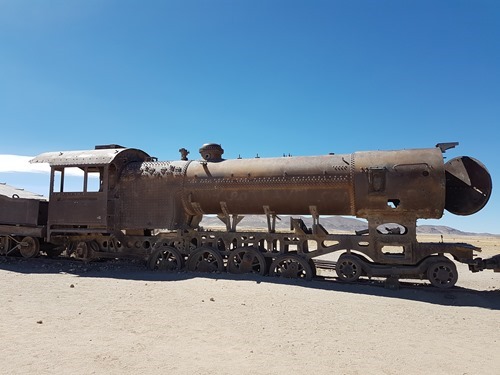 Our next stop was the salt flat itself… something we’d seen before in Argentina (and, to a different degree, Peru), but it was still fun. 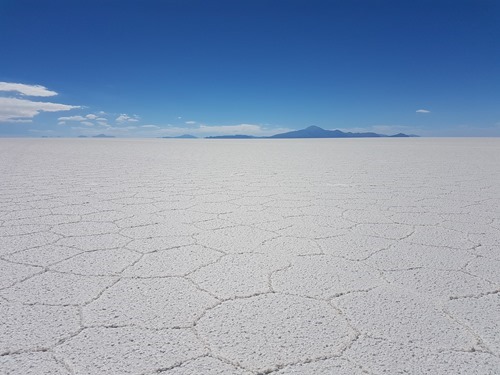 We crossed the salt flats to visit a volcanic island called Isla Incahuasi. This was super interesting: as the island had previously been underwater – back when the salt flats were a sea – most of the rock was covered by petrified coral. Crazy! 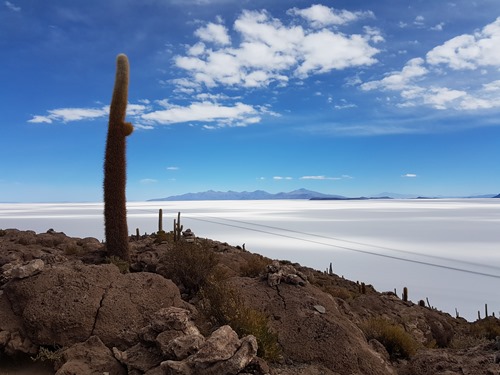 Leaving the salt flats, we headed on dust roads to San Juan, where we were staying for the night. We stayed at the Hostal de Sal los Lipez, built from blocks of salt. It wasn’t heated, but it did have hot water. We had a very nice time there, in fact. It’s very cool that they used local materials for pretty much everything. Here’s a view of the wall made from salt bricks with a coat rack made from cactus wood: 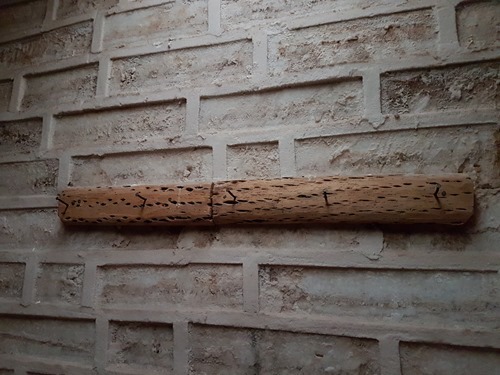 While the second day of our tour was due to be mainly about lagoons and flamingoes (you’ll see what I mean in a bit), we started the day with a visit to the necropolis of a pre-Incan (in this case 12th century) civilization who apparently measured about 1m in height. This was incredible to see: the necropolis contained actual bones, just laying there… some also had the deliberately deformed skulls that were also common in Incan nobles. 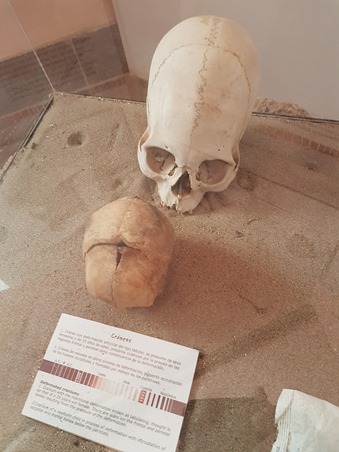 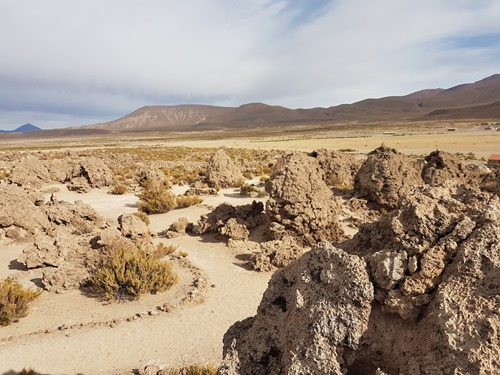 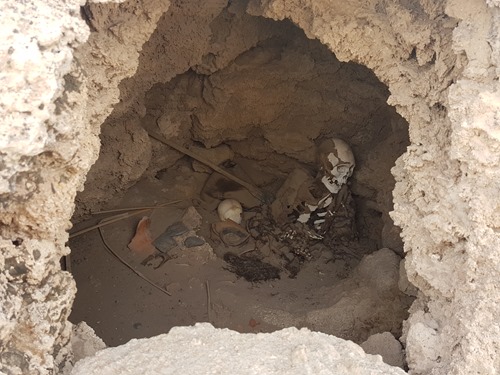 After this we went to visit 3 lagoons with flamingoes. The first, Laguna Cañapa, was stunning enough…

… but then we saw the Laguna Hedionda, which was even more impressive… … and eventually we arrived at the Laguna Colorada, which was just plain ridiculous. I was seriously thinking I’d hit my beauty threshold for the week. 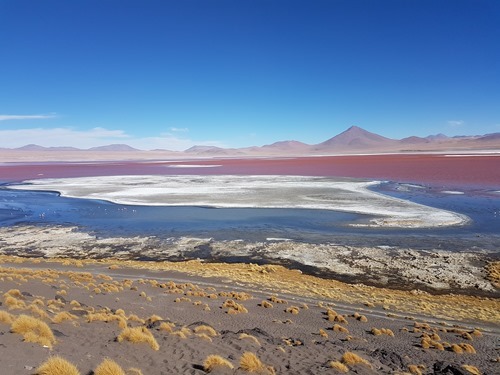 Along the way we visited the Árbol de Piedra, which was also really interesting. 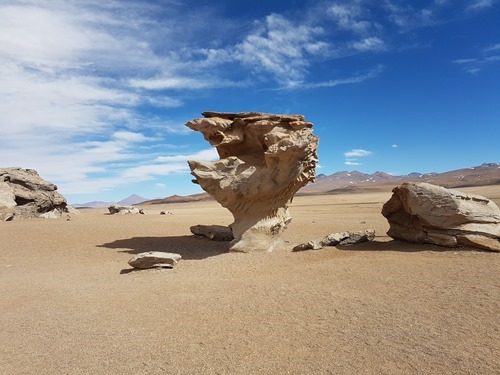 Our accommodation for the night – this time in Huayllajara, at 4,600m – was even more basic than the first night: still no heating, but this time we also had to manage without much electricity (once the generator was off) or any hot water. We then had to wake up at 4:30am to get to the Sol de Mañana, a geothermal field at 4,900m (our highest altitude yet), in time for the sunrise. This was a bit like a mini Yellowstone, but with fewer barriers to stop people from hurting themselves. I’ll leave it up to the reader to decide whether this is a good thing or not (I’m still unsure, myself). 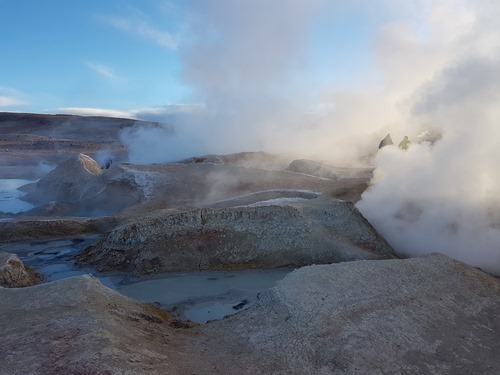 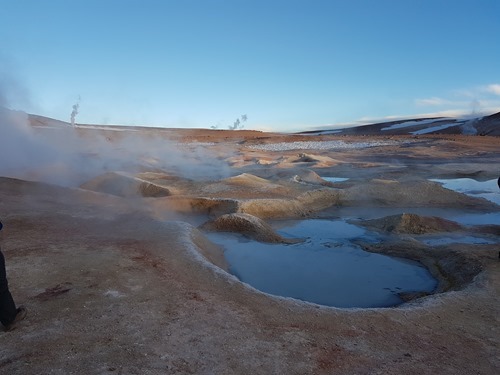 Then we headed down to some hot springs next to another lagoon. This was our chance to warm up (and, I admit, wash a little). Getting out was hard, but definitely worth it. 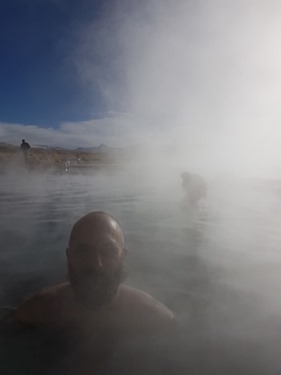 From here we had a few more stops before being dropped at the Chilean border to take a bus to San Pedro de Atacama. We drove through the past the Laguna Verde and Blanca – we were a little behind schedule, at this point, so only stopped for a few photos of the Laguna Blanca… and frankly we were a bit lagooned out, too – as well as a drive through the Salvador Dali desert.

It was an amazing tour, all told, and a real experience for the kids. There was a lot of time spent in the jeep – and on dirt roads – but it’s really the only choice you have to get around in this part of the world… I’d probably have preferred to have a bit more time for the kids to explore and play, but then we chose the 3-day tour, so only have ourselves to blame on that front. It was for sure a great experience for everyone, we all ended up in Chile tired but happy.

Next we’re visiting the area around Atacama. We’ve chosen a custom 1-day tour, this time, which should involve the Valle de la Lune, the “Hidden Lagoons” and some stargazing in the Atacama desert. We’ll see how that goes!

Oh, yes… I mentioned back when I talked about the Brazilian leg that we expected a few speeding tickets from the drive between Sao Paolo and Paraty (due to a lack of understanding and not having Waze installed on one of our phones). Well, they’ve started coming through. Most of them were pretty small, but one was quite hefty… the latest count is 6 tickets totally about $450 (yes, USD, unfortunately). At some point I’ll plot the locations – we have them all in km along the coastal road – in Google Maps, to see where they all are. I’m hoping that’s the end of it, as it’s been a week since we’ve seen any come through. Fingers crossed!