We were always expecting these few days to be special – one of the highlights of our trip – and they haven’t disappointed. We didn’t want to take any chances with the Peruvian leg, so we had the complete itinerary – including airport transfers and hotels – organised as part of the overall round-the-world trip.

The week started well: I mentioned in passing, last time, that we had one fewer bag than expected on arrival in Lima. It took the airline a few days to sort out, but we were finally able to pick the bag up just prior to flying out of Cusco. It was a huge relief, as one of my sons had not been able to change his outer clothes for a few days, by this point. Luckily he was probably the one least in need of a change of clothes.

The short flight to Cusco was uneventful: on arrival we were driven to our hotel, a lovely colonial-era building that apparently used to be a convent. 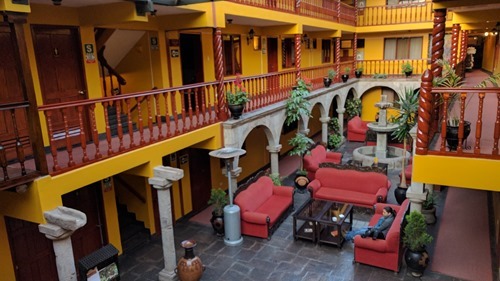 We were hungry so found the closest local restaurant. It was very decent – not a huge choice, but a good opportunity for one of us to try guinea pig (something you wouldn’t see on the menu in most parts of the world). I don’t eat meat, so didn’t try it myself, but it looked… interesting. 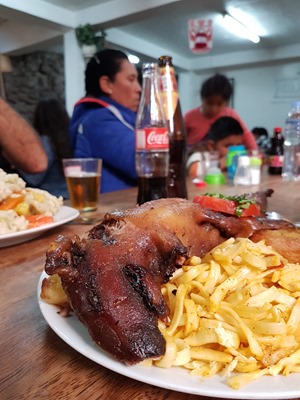 We then spent some time wandering around Cusco. This is really a clearing house for Machu Picchu and the Sacred Valley: you see huge numbers of tourists wandering around preparing for or recovering from their trip. Just like we were, in fact. 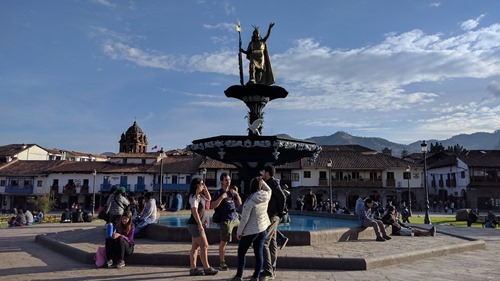 Cusco is much higher than Machu Picchu, so it’s also a good place to get used to the altitude (of around 3,400m) before hitting Machu Picchi (which maxes out at around 2,800m). We didn’t feel great, the first day, but chewing coca leaves and sipping coca tea did seem to help. These were freely available at the airport and in the hotel, which made things easier. 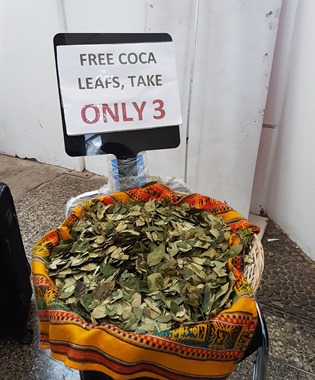 The next day we were picked up at 6:30am to be taken to Poroy – about 20 minutes away – where we would catch the train to Aguas Calientes. We left most of our luggage at the hotel in storage – the train only lets you take 5kg per person, so we packed lightly for the 2 nights we would be staying in Aguas Calientes and Yucay. We even left our computers behind, which was a little uncomfortable.

The early wake-up was a little painful, but we managed. The train itself was amazing: we had the “panoramic” option with PeruRail, which was really special. The view along the Sacred Valley of the Incas – through which the train passes – was completely unforgettable. 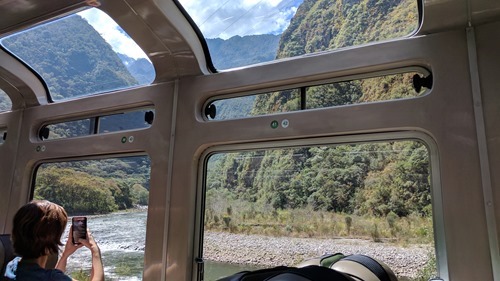 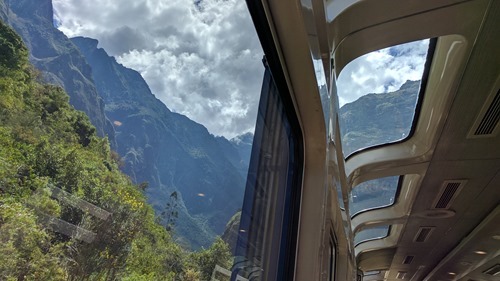 One interesting part was when the train zigzagged backwards and forwards along a stretch of track that allowed it to descend way more than a conventional straight track would.

As we descended towards our destination there was a distinct difference in climate: we went from a very arid, mountain climate (yet with cacti and other somewhat anomalous flora, at least from our perspective) to a tropical, rainforest climate. The train rarely hit its top speed of 30 kph, so we had plenty of time to enjoy the views along the 3.5 hours it took to travel the full distance of about 90km.

We arrived in Aguas Calientes (which I believe is Spanish for “shantytown built from souvenir shops and overpriced pizzerias”, or then again it could be because of the hot springs nearby… ;-) and dropped our bags at the local tour operator before waiting in line for the bus up to Machu Picchu. 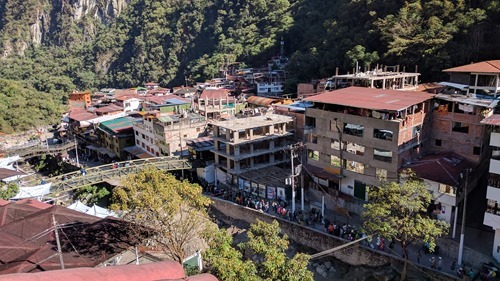 The wait to go up was modest – about 30 minutes – so that was OK. Each of the buses had “Ecologico” written on them, but it’s clear these were pretty far from being green in any way. We later found out that there had been a proposal to install a gondola (what we tend to call cable car in Britain), but this ended up being squashed by special interests, i.e. the private company running the buses. Sadly said company doesn’t want to buy more buses, either, so in high season (right now) you can easily expect waits of an hour or more. 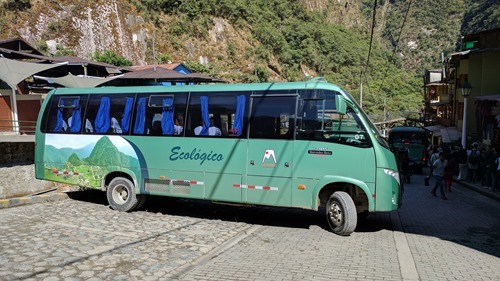 Once at the top we were met by our guide, Adriel. Early on in the tour it started to rain (or at least to “spit” as we used to say back home). This had me a bit worried, as we’d left our jackets back with our bags and two of the kids didn’t even have long sleeves. Luckily the weather cleared up pretty quickly, and for most of the tour we were nearly too hot.

We had between 2 and 3 hours of tour (we lost track of time – the place was stunning, and the context Adriel provided completely enthralling). I was expecting to be amazed, but this was something else entirely. 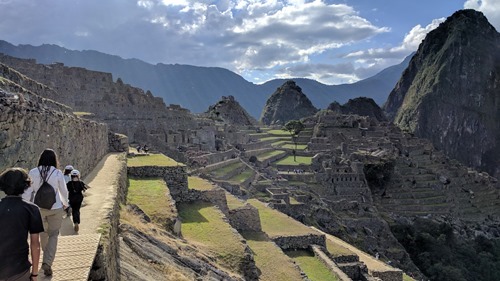 Once the tour was finished we spent another 30 minutes on our own, soaking up the views, before waiting the hour in line to go down. Many people chose not to wait: most of these walked down, some chose to cut to the front (some of these were assisted by their guides, which was particularly upsetting). Being British I was outraged by this, but my wife (who’s Swiss but clearly has more than a dash of Mediterranean blood) was both outraged and vocal. She accused a number of members of staff of corruption – and was completely right to do so – while I just tried to get the kids on the bus. She did calm down eventually, but only after complaining at length to the tour operator, once back down below. 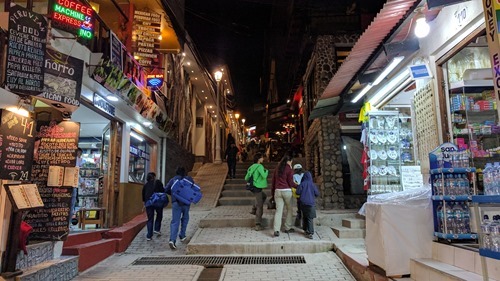 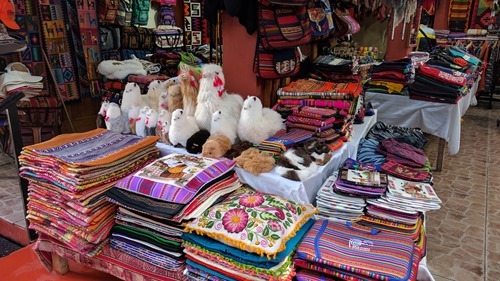 Our itinerary included a second day in Aguas Calientes… heading back to Machu Picchu would have meant buying more bus tickets to the top and a second set of entrances (neither of which was especially cheap for a family of 5), and frankly the kids had loved the first day but weren’t up for doing it all again. So we decided to cut short our stay and move our tickets from the 4:45pm train to the one leaving at 10:55am. After buying some overpriced pizza for dinner we stopped by the train station on the way back to our hotel (which had a 9am checkout policy – another reason for us wanting to change our travel plans). Luckily we were able to make the changes and our trip back went smoothly.

We didn’t travel all the way back to Cusco directly: we took the train to the intermediate stop of Ollantaytambo and were taken from there to a hacienda in Yucay, a village on the outskirts of Urubamba. Somewhat incredibly, the bus that collected us had our luggage in it! We hadn’t asked for this – and had planned our packing so that we didn’t need it – but it was a welcome bit of initiative from our tour operator. It was only after we’d settled in at the hotel that we realised we didn’t have the bag with my wife’s computer in it. Argh!

The receptionist at the hotel made a few phone calls, and was able to confirm fairly quickly that the bag was still in storage at the hotel in Cusco. In another piece of unneeded proactivity, they sent a driver from Cusco with the remaining bag (even though we’d be back there the day after). At least we had all our bags, once again.

We found a lovely place to eat in Yucay, slept well in our lovely rooms, and took a van tour around the area, with the primary stop being at las salineras de Maras, a cooperative salt mine dating back to pre-Inca times. The salt comes out of the earth via a warm spring, allowing really easy extraction. It’s probably still hard work, of course, but at least you don’t have to dig massive holes in the ground, like they do in Switzerland. 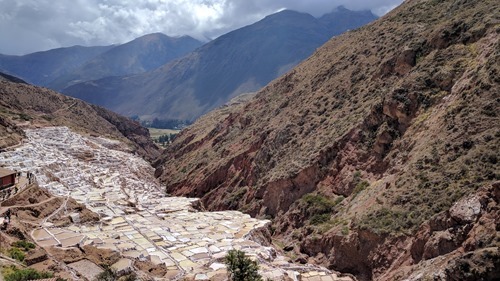 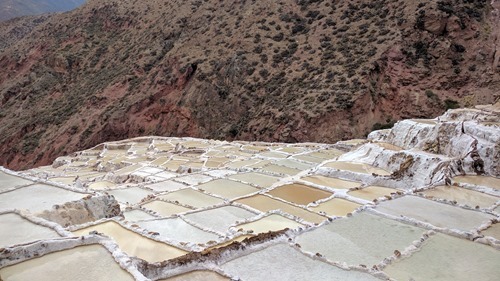 After returning to the hacienda, another van took us from our hotel in Yucay back to the hotel in Cusco. We’re now heading out for an early dinner and an early night: we have a 4:30am pickup (which will make our 6:30am pickup seem like a Sunday morning lie-in, no doubt) for our trip to Sao Paolo. Our travel agent pinged me, this morning, to say that the airline had cancelled some of our flights as we’d “missed some”. No doubt due to us being re-routed by American Airlines on our way from SFO to Lima… anyway, things have apparently been sorted out, at this stage, but we’ll see tomorrow. Fun fun fun!