It’s now less than a week before my family and I get on a plane and start our big trip: visiting 13 countries on 5 continents (not including the one we’re starting from) over the course of 6 months. We leave on July 2nd, 2017, and – if our plans don’t change – will return home on January 5th, 2018.

Here’s a map of where we’re going… be sure to zoom into different locations and click on the place-markers to bring up additional information.

It’s been a deliberate choice, over the years, not to talk much about my family on this blog. Primarily out of respect for their privacy, but also because I don’t want this blog to end up littered with cat photos. (No, we don’t have a cat – I’m just speaking figuratively... :-)

Now, though, on the verge of this great adventure, it seems the right time to introduce you to them. My next 6 months will be spent – no doubt very intens[iv]ely – with them, and for sure I’ll be talking about them a lot more here.

The first thing you need to know about my family is that they’re amazing. I know most people probably think that about their families, but I’m saying this completely objectively :-). Before we talk about them some more, here’s a quick background as to how my fantastic family came to be.

My wife (Celia) and I met back in 1999, when we both worked at Autodesk in Neuchatel. We got together in 2000 and – very soon after, which was a huge leap of faith on both sides – we left on our first great adventure, moving to the San Francisco Bay Area for me to manage a team in the Americas. We were married in Las Vegas (just before AU 2001!) and then in 2003 moved to Bangalore for a 2-year assignment for me to manage a team in the Asia/Pacific region. To our enormous surprise, pretty much on arrival in India – we were still jetlagged and dealing with the smells, the noise and the dust – we found out we were expecting our first child. Kalan (a son) was born in India in July of 2004, and we spent the rest of our time in Bangalore as first-time parents, learning how to do parental things in an environment that was at times pretty intensely child-unfriendly. Just before our 2 years came to an end my division went through a reorg and I was offered the chance to manage the DevTech team worldwide – something I started while still in India and then continued once I got back to Switzerland at the end of 2005.

My wife loves to travel: she would have been very happy to have kept moving, working in different countries. I was the one who pushed for us to settle back in Switzerland – for me it was hands-down the best place I’d lived and where I wanted to settle in the long-term – and so that’s where we ended up. During this period our family grew a little more, with the birth of Zephyr (another son) and Anokhi (our daughter) in September of 2006 and June of 2009, respectively. I’d started this blog in June of 2006 (oh, it’s just hit its 11th birthday!), primarily to reconnect with the developer community but it also led indirectly to some interesting career opportunities within Autodesk. I’ve been very lucky with my career to have been able to maximise the time I’ve spent with my young family while doing work I’m passionate about.

It’s really been a privilege to see my children grow up: Kalan has turned into a fantastic young man and caring older brother (yes, with the odd smattering of teenager, but that’s only to be expected) who loves the ocean and already knows he wants to study marine biology when he’s older. Perhaps not the best choice for someone based in Switzerland, but there you go. Zephyr is our bookworm: he literally devours books (yes, he’s switching to a Kindle for this trip) and loves the stage. He stole the show at this weekend’s school play: he was the only boy in his class who was comfortable playing the part of a woman, and he did so with gusto. Anokhi is a little ball of energy: always smiling and happy, whether on her own or in the company of others. She loves to sing and dance and the last time I asked about her future plans she said she wanted to be both a doctor and an actress. I have no doubt whatsoever that she can do anything she sets her mind to.

Anyway, so here we are in 2017. Kalan is about to turn 13, Zephyr is 10 and Anokhi turned 8 last week. Celia has been dreaming of us doing a big trip as a family, and now is the perfect time: Kalan’s studies aren’t yet at the point where it would be impossible to miss a few months, and Anokhi is now old enough to really benefit from the trip. Workwise, I’m currently in a team where it’s possible for me to work in a reduced capacity for a 6-month period, so the stars have aligned across the board, really.

Celia does quite a bit of web design and social media work for local organisations, and so decided to set up a website for our trip. I’ve had a domain gathering dust for perhaps a decade, now, so the site is now live at walmsley.ch. She has called it “le Monde en poche”, literally “the world in your pocket” (the best idiomatic translation is probably “the world is your oyster”). 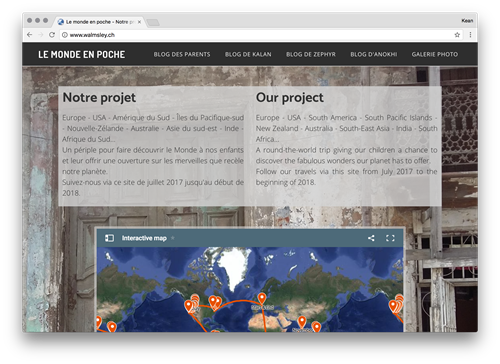 Once I pick up our Garmin inReach Explorer+ (I’ve had it shipped to a friend who lives at the 3rd stop on our tour) I’ll be integrating the option to see where we are in the world in real-time. Scary but totally cool, I’m sure you’ll agree.

If you’d like to get to know my family a bit better, be sure to visit their blogs. Kalan, Zephyr and Anokhi have all written introductory posts – so far in French, but as we’re a bilingual family I expect some will end up in English, too – and we’ve also integrated an Instagram feed for the trip into the site.

One way or another the next 6 months is going to be an incredible adventure for the Walmsley family. I hope you find the time to travel along with us, posting comments to ask questions or make suggestions of places to visit.