OK, so that was perhaps a little mad. Earlier today I spent 5 hours on the train – going from Neuchatel to Zurich and then on the new SBB service via the Gotthard Base Tunnel – to get to Milan, had a coffee with my uncle (who lives and works nearby), gave a 30-minute presentation on Forge and AR/VR at a Meetup, and then spent 4.5 hours on more trains – this time going towards Geneva on the EuroCity (formerly Cisalpino), and then changing at Brig to head via Bern – to get home.

This was the main train there (an Italian train in a Swiss station): 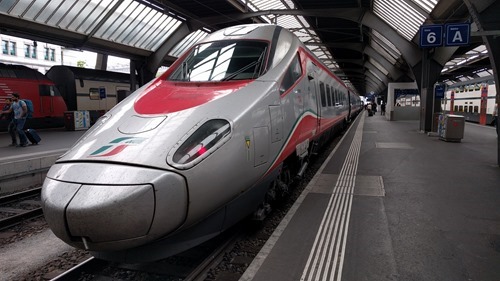 And the main train back (a Swiss train in an Italian station): 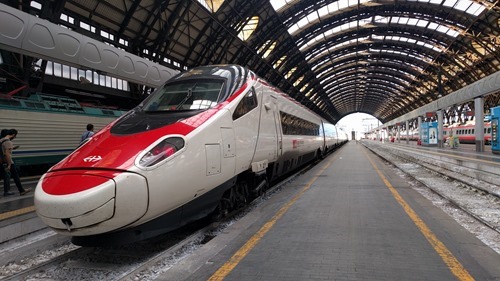 I fully knew what I signed up for when I bought the rail ticket, so I really only have myself to blame: with this weekend’s Autodesk Football Tournament and next week’s Forge Accelerator (both held in Barcelona) – coming so soon before our big family trip – I thought it made more sense to take the travel hit than spend another night away.

But enough (completely half-hearted) griping. How was the Meetup itself, you might ask?

Firstly, the venue was pretty awesome, as expected. 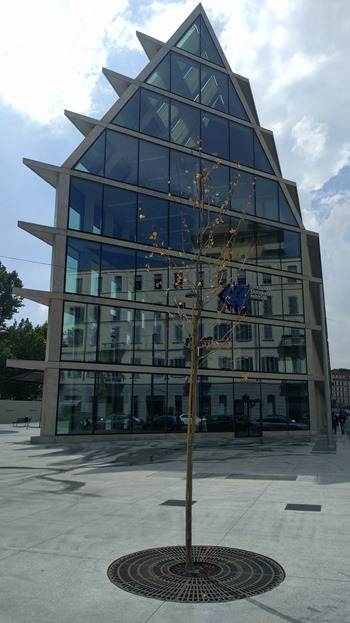 The crowd was a good size – I’m guessing it ended up being about 50 or 60 attendees, by the time I came on (and quite probably more afterwards). 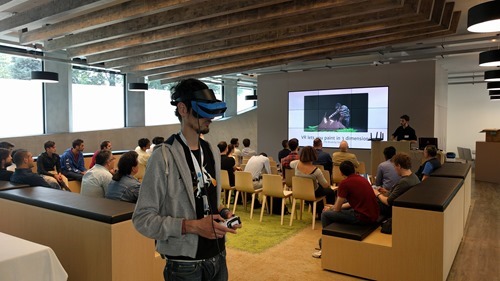 I was very pleased to meet at least one person I’ve had regular Twitter and LinkedIn contact with, over the last few years. I also found other “Through the Interface” readers in the audience, which is always nice.

An unexpected surprise was having the chance to test the new Windows Mixed Reality device from Acer: 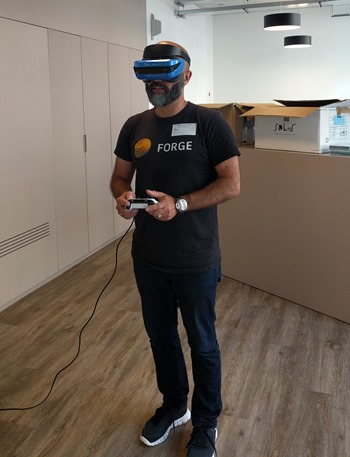 It was actually rather neat, and at a tenth of the current price of the HoloLens it’s a pretty exciting device. For some reason it reminds me of the View-Master Model D (the favourite View-Master of any discerning collector), too.

I didn’t manage to snap any photos of my session (or ask anyone else to, which would certainly have been simpler), but thankfully social media has come to the rescue. If interested, check Twitter for more.

I wasn’t sure I was going to carry both HoloLens devices across with me when I woke up this morning: it seemed a bit pointless to carry a suitcase – even one full of tech – on a day trip, but I’m very glad I did. Despite being held at Microsoft, there was only one HoloLens available for the event – they’re still not sold in Italy, it seems, and so are fairly rare – so I felt happy that additional people had the opportunity to give mixed reality a try.

A number of people in the audience were already working with Forge, which was really cool. Staff present from L22, for instance, will also be in Barcelona next week, which is great to hear. (L22 is the architectural branch of Lombardini22 and their sister branch, Degw, was responsible for the interior design at Microsoft House…  another nice bit of circular serendipity.)

All in all it was a very worthwhile, if slightly exhausting, trip. A big thanks to Microsoft Italia and the Khronos Milano Meetup organisers – especially Giorgio Mazzucchelli – for making the event such a success!

I’m just wrapping up this post on platform 12A in Bern station, waiting for my last (and – by a long way – the slowest) train of the day. But home I soon will be!