Please note the date above: this is an April Fools’ Day post that was deliberately intended to make people only realise late in the article that it is, indeed, #FakeNews. Unfortunately a few (quite possibly automated) news aggregators have passed this on as real. In order to prevent further damage coming from this, I’ve placed this text at the beginning of the post to make the situation super clear. As much as I’d love to have people continue to fall for it – it gives me a fair amount of personal pleasure, I admit – I think it’s safest to make sure people understand this is a little harmless fun in the long tradition of April Fools’ Day. And with that said, read on…

This is really exciting news: I’m proud to announce that during the recently submitted US federal budget, a small line-item you may have missed was for the purchase of Dasher 360. We’ve been working with the new administration in Washington D.C. over the last few months to get Dasher 360 ready for use in the White House. Exciting times! 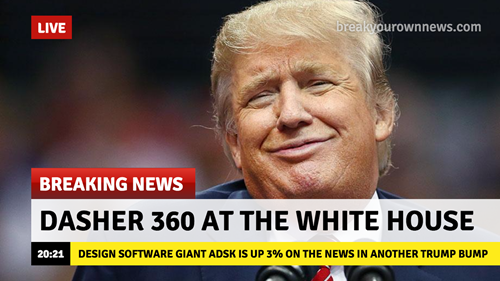 For those of you unfamiliar with Dasher 360, it’s an ongoing Autodesk Research project to help owners and operators optimize the performance of their buildings, to more quickly understand where tweaks need to be made. For Dasher 360 to work in the White House we had to place sensors in each room to detect temperature, CO2, humidity and occupancy. The readings from these sensors get streamed to our back-end data storage and can then be visualized in Dasher 360 – a web-site that embeds the Forge viewer to display sensor data alongside (even inside) the 3D model. Dasher 360 provides in-context access to both historical and real-time performance data.

Here’s a quick view of the White House inside Dasher 360: 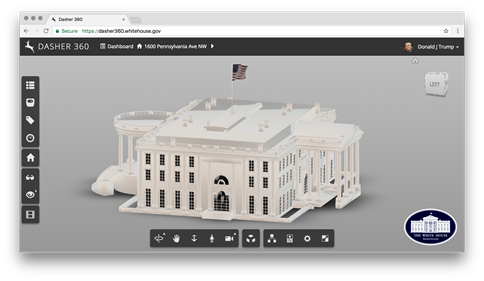 Here’s another screenshot, this time showing the location of the sensors we’re currently tracking: 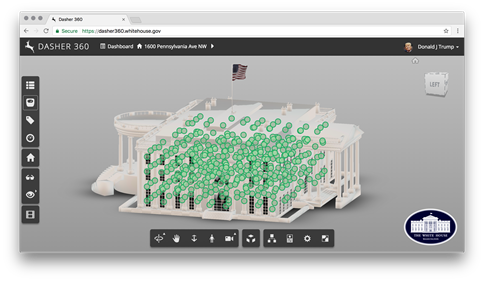 I won’t show any of the data itself, due to obvious sensitivity around how it might be used.

This issue was touched on recently by President Trump himself while expressing his support for the project:

“Dasher 360, from our friends at Autodesk Research, is just terrific. It allows me to see exactly what’s going on in the White House. I can see how warm it is, I can see how well this historic building performs with fewer staff… and with recent improvements in sensor technology – they can now detect colors and body types, beyond just occupancy – I can check on the quality of the people in the building: to assess the terrorist threat and see how many are 6s rather than 10s.”

At Autodesk Research we’re proud to be helping Make America Great Again, one building at a time. Be sure to watch this space for information on an upcoming research project that’s going to be of great interest over the coming months, too: we don’t yet have an official product name, for now we’re just using the codename “WallCAD”.