Noble Studios, the contractor who helped develop AutodeskResearch.com, has won a Platinum MarCom Award for the project.

The site is indeed really cool: head on over if you haven’t been there in a while. I have on my list of things to do – let’s now call it a New Year’s Resolution for 2017 – to start blogging over there, too. But there are plenty of interesting things to see even before that happens. ;-)

Just for instance, check out some of the publications listed for the awesome Jos Stam, as well as some of his own entertaining blog posts. 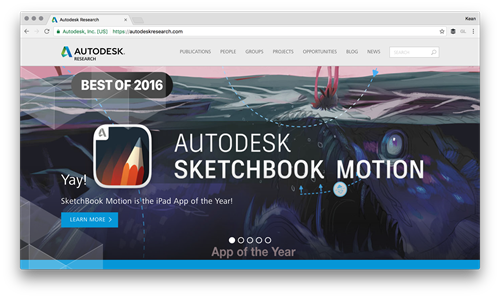 The MarCom Awards seem to cover a wide array of marketing communications media. The specific award was given for category 180, which means it was for a “Corporation”. Here are the details of the entry.

Congratulations both to Noble Studios and to the project team at Autodesk Research who worked on the site (Ruslana Steininger, in particular, has devoted a huge amount of her time to making it a success).