My plans for Autodesk University 2016

On Saturday I’ll be flying out to Las Vegas for the latest Autodesk University. I thought I was going to have a relatively lightweight AU, this year – I have just one class to deliver – but that’s not how it turned out, in the end.

My first big engagement is at the ADN pre-conference, where Cyrille Fauvel and I will be talking about VR and AR at Autodesk. It’s going to be a fun session – typically we get around 500 attendees at the DevDay, so it’s a big crowd. While it’s hard to demo these technologies to a large audience without expensive, specialised equipment, we’re going to see what we can do. I’m really looking forward to this one!

The second is my class, on Tuesday lunchtime, entitled “Connecting Autodesk to the Internet of Things”. This one is sold out, and will probably have around 110 people in the room.

I’ll be talking about Project Dasher, the Forge APIs used to implement Dasher 360 and demoing the latest version, our “Phase 2” implementation. I’ll also be showing how to drive Dynamo using sensor data stored in our time-series database back-end.

Here’s a sneak peek at the current state of Dasher 360, to whet people’s appetites: 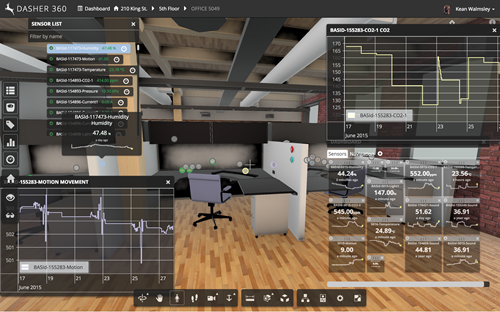 The third (and final) session came as a little bit of a surprise: last week I had a call asking if I’d step in for a colleague during the Construction Launchpad event. He was – in any case – planning to talk about Dasher 360 and AR/VR (topics I’m very familiar with), so it was a natural enough request. The thing is that they’re expecting around a thousand attendees at the event. Gulp. That qualifies as my biggest ever presentation (as far as I recall, anyway). There’s currently still plenty of space in the session, so if you’re coming to AU and don’t have plans for Wednesday morning, be sure to sign up. I’ll probably be speaking for all of 10 minutes (maybe less), but there’s lots of other goodness on the agenda.

I’ll be very happy when Wednesday mid-morning rolls around: speaking in front of around 1,600 people during the course of the three sessions (not accounting for overlap :-) feels like a big deal. Hopefully it’ll feel less so by the time it’s all over!

See you in Vegas…

A colleague just pointed out that the construction mainstage event is actually on Tuesday (I’d been told – and had even mentioned here – Wednesday). On a positive note, it does mean I’ll be completely done with my sessions by the afternoon on Day 1 of AU proper. So there’ll be plenty of time to relax, afterwards.