Dancing Robot takes the stage at the Las Vegas DevDay

Yesterday Autodesk held its first Developer Day of the 2016 season with a pre-conference event ahead of Autodesk University 2016 in Las Vegas. My old pals at the Developer Network team had asked me to participate, so I came along and presented a session on Virtual and Augmented Reality at Autodesk. 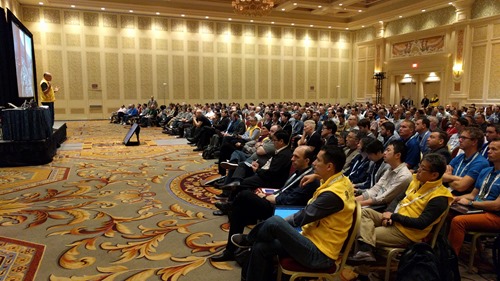 The main event was primarily about Forge, natureally enough. It’s great to see how the platform’s evolving, over time.

During the VR/AR session we spent time looking at various VR-related technologies available from Autodesk, and then demoed a couple of AR prototypes Cyrille Fauvel and I had created.

My own prototype was (of course) the “Dancing Robot”, and we found a pretty good way to show it on stage: I placed one of the HoloLens headsets on a seat in the front row if the audience, looking at the stage. I’d already set the demo up so that both devices were seeing the same hologram and we then streamed the video feed from the HoloLens in the crowd to the projector.

The effect was pretty neat: we could see the virtual robot on stage with me – with a little lag, as the video was being streamed wirelessly – while I was controlling it.

Awesome AR/VR talk and demo from @keanw with @HoloLens for #AU2016 #DevDays pic.twitter.com/jD735mdbdz

@keanw blowing my mind at #AU2016 demoing new advances in virtual reality. @HingePointWay needs a couple of these headsets! pic.twitter.com/JYC4VWxH3U

Cyrille’s prototype was totally cool, with serious real-world potential. He showed an app that had been created by pulling down a couple of models from Forge – using the Model Derivative API – and creating Unity assets for display inside HoloLens. The gaze cursor showed a metadata tooltip describing the part you were looking at, and he also added an explode capability. Those two features alone present an enormous amount of potential for developers (and customers). I’m really excited to see where it goes!

All in all it was a great event, as usual. I love interacting with DevDays attendees, and I’m looking forward to catching up with more people during the course of AU proper.