AR and VR in Zurich

I had a really excellent day, yesterday. I’d flown in from Munich, the night before, and stayed at the charming Zum Guten Glück restaurant/hostel in Zurich. After collecting my key I met Rob Morgan – who was also due to speak at the next day’s Expanding Immersive Design conference – and we headed out for the pre-arranged dinner together. After a slight Uber-snafu (there are two restaurants named Markthalle in Zurich – who knew?) we found the right place and had a very nice meal, enjoying highly engaging discussions with our fellow speakers.

Yesterday morning – rather than heading directly across to the ZHdK for the conference – I skipped the beginning to pop over for a quick meeting at ABB’s headquarters in Oerlikon. 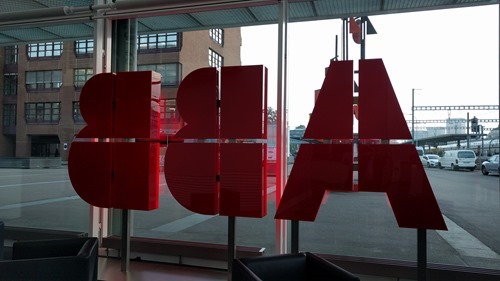 While there, I simply couldn’t resist the opportunity to film the virtual IRB 6620 dancing in the lobby of its spiritual home:

After making it back across to the ZHdK, I was very happy with how the event went. My presentation seemed to go well – I demo’ed Vrok-It to perhaps 150 attendees – and I really learned a lot from the other speakers. I had to cut the evening a little short to make it back in time for my eldest son’s parents’ evening, which was a shame: it was a great event which also had a very different audience than I’m used to. All in all it was a very stimulating experience.

I’m now playing serious catch-up with my AU 2016 preparations, though. I’m overdue on the deadline for my class handout, so I expect chunks of my weekend will be spent working on that. Hopefully I’ll manage to get things back under control during the course of next week, but we’ll see.