SINDEX 16: Cuddly robots are the future

After the fun of participating in last week’s Hackathon, I headed across to Bern for SINDEX 2016. SINDEX is a biannual exhibition focused on industrial automation. I went to the last one and found it really interesting – well worth going back to, especially given my involvement in IoT and my interest in robotics. The event is probably a smaller, Swiss version of the Hannover Messe, although I’m only really guessing as I’ve never been there.

It was also a good chance to meet with a few companies who will be exhibiting their products at the upcoming Design Night Switzerland (which we’re holding to celebrate Autodesk Switzerland’s 25th anniversary).

One thing that really struck me, this year, is that many companies are placing big bets on collaborative – or personal – robots as being the future. Gone are the days that robots would be stuck in a cage away from humans: they’re now being given “cuddly” materials (such as neoprene or leather) and are equipped with sensors to stop them from hurting people.

Here’s the leather-bound P-Rob from F&P Robotics, as an example. 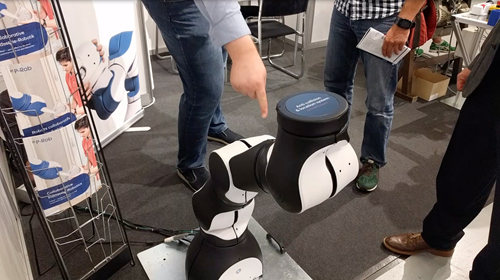 The YuMi from ABB is another example of a collaborative robot: 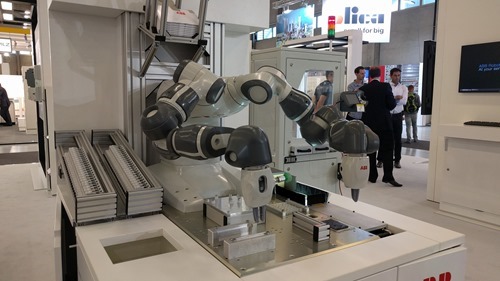 A lot of this is to simplify the integration of robotics into production processes but also to make it easier for humans to accept robots as partners. This is a really interesting area, and is one that Autodesk explored for the AU Hive exhibit, for instance.

I had a couple of unexpected surprises at this year’s SINDEX. One was bumping into Tobias Degen from ROTRING DATA, a local Autodesk partner. We’d spoken over the phone many years ago, and he called me over when he saw me walking past. It was very nice to catch up with him. 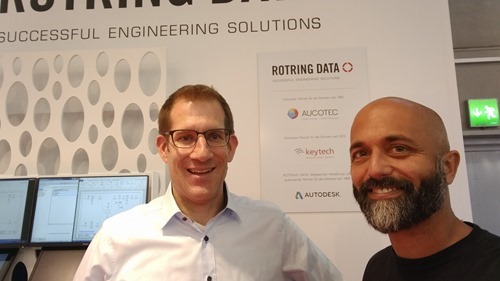 The next surprise was seeing some people from DAQRI, makers of the Smart Helmet. I spent quite some time talking to them about their product – and how it compares with HoloLens, for instance – and had a quick demo, too. 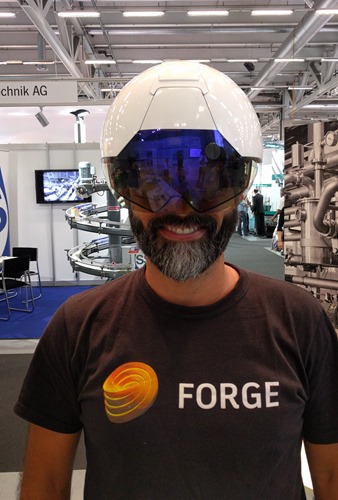 The field of view is what you notice immediately – it’s quite a bit bigger than the current HoloLens FOV – but there’s still some work needed on tracking. DAQRI know this, of course, so I’m hopeful they’ll be delivering something soon that competes (and in a form factor that’s ultimately much more interesting to the construction industry). Something to watch, for sure.

And it looks really cool, as you can see. I shared this image internally, and – perhaps inevitably – some bright spark spotted a parallel with Futurama: I’m in Toronto for the next few days, meeting with colleagues in Autodesk Research, after which I’ll be spending a few days in Boston before heading home. Before talking about any of that, though, it’s worth saying a few words about how I spent my weekend.