« SINDEX 16: Cuddly robots are the future | Main | Toronto and Boston »

On Saturday I gave a couple of VR presentations at Micro16, an exhibition and conference held at Microcity, a (relatively) new technical hub in Neuchatel that houses part of EPFL.

[I always pronounce Microcity with stress on the second syllable, much as Will Ferrel does when pronouncing “Metrocity” in the movie Megamind (so that it rhymes with “atrocity”). Anyway – it’s just a (formerly) private joke shared with my wife and kids.]

I’d been invited by a local organisation called Enigma & Indicium, which organises vocational workshops for young adults. The two sessions were attended by people aged from about 10 upwards. 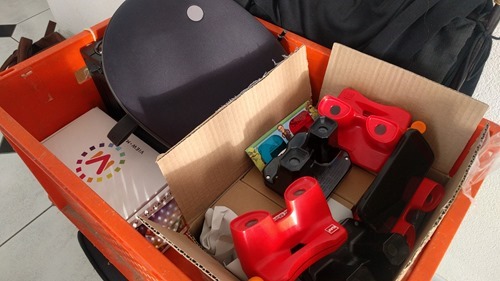 For this kind of audience I make a point of bringing along a bunch of View-Masters. I collect View-Masters and reels – so I have a lot to choose from – and I find that children are still impressed by the effect they give. I like to discuss the parallels between historical applications of View-Masters and those of VR, today: View-Masters have been used to teach anatomy (i.e. medical) and identification of boats and planes (i.e. military), both of which are clear target industries for VR technology. 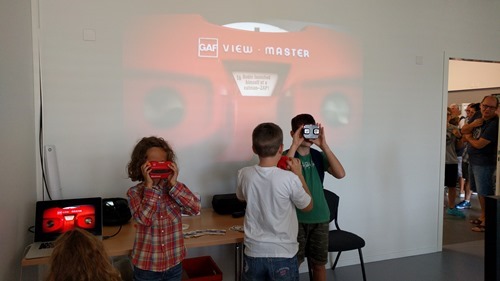 While not strictly VR, I did give a HoloLens demo to those who were interested, at the end. This gentleman is at the upper end of the age range I’ve seen try it, and he seemed very happy with the experience: 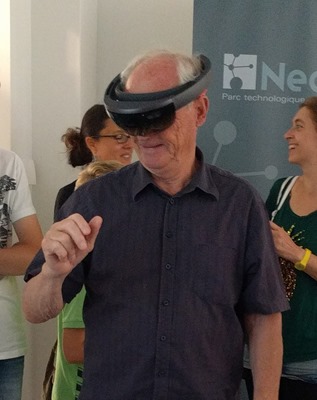 There was an interesting exhibition area at the Micro16 event: from my perspective, the most compelling technology on display was a haptic feedback device targeted at the medical industry (mainly for remote surgery, I believe). I don’t know if it comes across in the video, but you could really feel the resistance of the virtual material the virtual ball is passing through. I know haptics isn’t a new field, by any means, but I’m impatient to see how technology such as this might be applied to virtual environments.

After finishing up at Micro16, I headed across to Zurich. I had an early flight out of Zurich airport to head across to Toronto on Sunday, but Matt Jezyk and a few members of his team were visiting the Advances in Architectural Geometry conference, so we had the chance to catch up for dinner. 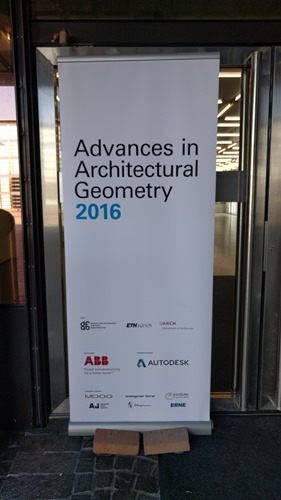 Matt is in charge of a number of products in our AEC division, including Dynamo, FormIt and Monolith. Andy and Pan are the developers of Monolith – a voxel-based editor Autodesk acquired early this year – and they were in Zurich with Matt to deliver a Monolith workshop at AAG 2016. Here’s a quick video showing what their product does.

If you want to give Monolith a try, download it from here.

I’m now about to leave Toronto for Boston, so I expect my next post will be about what I’ve been up to in these two fine cities.