Just out of curiosity, this morning I decided to go and check the YouTube video we saw in the last post. I’d realised from my messing around with the Star Wars opening crawl that if you include copyrighted content in a video, then sometimes ads get included, too, with the proceeds benefiting the copyright owner. Which is absolutely fair enough, as far as I’m concerned.

What I hadn’t realised is that some copyrighted content isn’t viewable in certain countries, presumably at the request of the copyright owner. So due to its use of a Chemical Brothers track, my last video may not have been viewable in Germany, a place where there happens to be a whole load of robotics and advanced manufacturing enthusiasts. 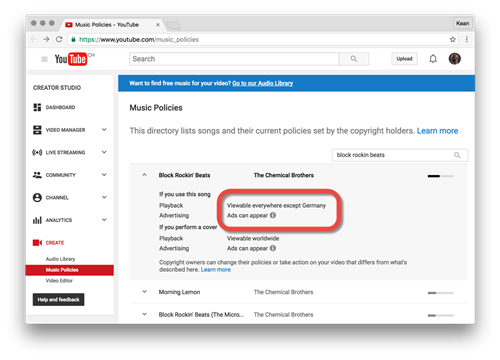 I couldn’t have that, so I went ahead and recorded a new version of the video, this time with a song that’s viewable worldwide. Incidentally, if you’re using copyrighted tracks in your own videos, you can check here whether a song is restricted regionally.

Here’s our robot dancing again inside HoloLens, this time for the viewing pleasure of our friends in Germany. Enjoy!

By the way, I just received a congratulations via LinkedIn for my 21st anniversary at Autodesk. I don't fully believe it's true – I suspect there must have been some kind of malfunction in the way LinkedIn calculates these things – because I don’t really know where the time has gone. The next big milestone (if I make it that far) will be in a couple of years when I hit the “half my life at Autodesk” point. Gulp.

It turns out there’s a reason certain YouTube music videos are blocked in Germany. Mystery solved!