This post shows something really simple, but I decided to share it here as it took me some time to track down.

On Saturday I received the 3D model of an ABB industrial robot – the IRB 6620 I mentioned last week – from Tom Eriksson. He’s used a number of tools – including Fusion 360 – to create a gorgeous rendition of this particular robot in Unity. Tom very kindly agreed to share the model, and has spent quite a bit of time helping get it ready for HoloLens.

The first version Tom sent unfortunately didn’t work for my purposes, as it contained something Mac-specific, due to his use of Cheetah 3D. Tom then exported to FBX and sent an updated version of the project. As this was a standard Unity project I had to do some work to get it showing correctly in HoloLens.

My initial attempts led to a planar view onto the model: 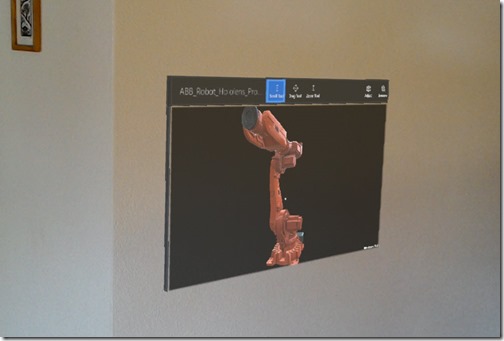 It was clear I was missing a setting, somewhere, and I eventually managed to find out what it was. Beyond the standard settings shown in the majority of tutorial blog posts, there’s a “player setting” for the Windows Store app target that you need to check: “Virtual Reality Supported”. 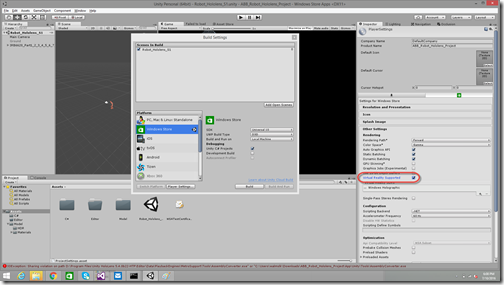 You can then build in Unity and build/deploy in Visual Studio, and the model should display magically in HoloLens in glorious 3D: 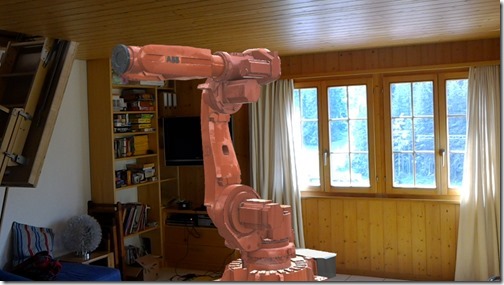 The model Tom prepared looks really amazing in HoloLens. Its quality is way beyond that of the majority of models I’ve seen so far. Here’s a video that shows how it looks from various angles. Simply beautiful!

My next step will be to animate the various components of the robot. My eventual goal is to do a couple of things: to have some user interactions that affect how the robot moves, of course, but also to have the robot “dance” to the music being played at the event. I haven’t yet decided whether I do this via the onboard sound processing, compensating for lag (but then what happens with multiple HoloLens devices?) or whether I create a simple Raspberry Pi- or Arduino-based server that does beat detection and controls the shared model in some way. We’ll see what makes most sense.

Tom is also thinking about looking at at least one other robot model – with any luck we’ll soon have a few to choose from!