« The Future of Design | Main | Autodesk Research and IoT »

Following up from last week’s post, which included a brief video showing where we’re headed with generative design, today’s post highlights a speech by my colleague in Autodesk’s Office of the CTO (OCTO), Maurice Conti. I’ve mentioned Maurice before: he has an Applied Research team working on Pier 9 that is currently hiring a Machine Learning + Robotics researcher. 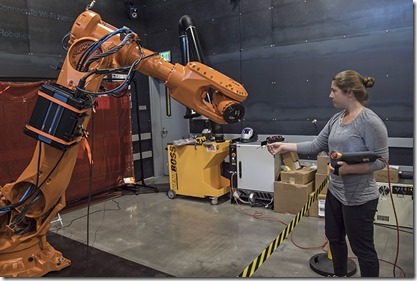 Maurice gave a speech at TEDx Portland entitled “The Future of Human Augmentation”. It looks at how we’re being augmented, not only by computational systems (helping us think) but by robotic systems (helping us make) and by a digital nervous system that connects us together.

He makes the case that change is accelerating by looking at the various eras that have defined human civilization:

Presumably the age after is going to hit before the end of the decade and will last about 6 weeks. ;-) In all seriousness, it’s this rate of accelerating change that many believe will lead to The Singularity, which many more believe to be no joking matter. Interesting times are certainly ahead. At some point we’ll even be able to start nesting new levels of simulated reality, rather than being a leaf on the tree that Elon Musk acknowledges almost certainly exists. But I digress.

Aside from mentioning – on the “design” side – Dreamcatcher and some projects using it, Maurice also talks – on the “make” side – about human-robot collaborations such as  and The Hive from AU 2015 and – on the “use” side – the ability for IoT to have bring significant benefits for designers and manufacturers: rather than spending all that energy making people want our stuff, we’ll be able to spend it making stuff people actually want.

I like Maurice’s techno-optimist view of the world: despite having a penchant for post-apocalyptic science fiction, I’m also mostly optimistic about the role technology has to play in our future. I do believe advances in digitial fabrication (sometimes mentioned under the umbrella of Industry 4.0) are going to bring about significant change for many parts of society, one of the reasons I was disappointed by yesterday’s overwhelming rejection of the universal basis income by the Swiss people. But the fact the vote happened at all is significant, so we’ll see where things go.

What do you think? Is this where things are headed? Are you concerned that things are going to change for the worse? Let rip in the comments!