Reflecting on the Forge DevCon

Today has been a strange day, to say the least. Waking up to the results of the UK’s EU referendum (also known as the “Brexit” vote) was a complete shock, and I’m yet to recover. The world has certainly changed but it’s going to be some time before the full impact is felt.

Last week in SF I felt a little bit of this, although in a much more positive direction: that we were at a moment in time where things were about to change. Not immediately, and not for everyone, but I definitely came away with the sense that things were about to get interesting. For me, certainly, but I expect for many of you, too.

The platform that’s being built – and we’re definitely at the beginning of this journey, there’s a long road yet to travel – is going to enable us to build some really cool stuff. 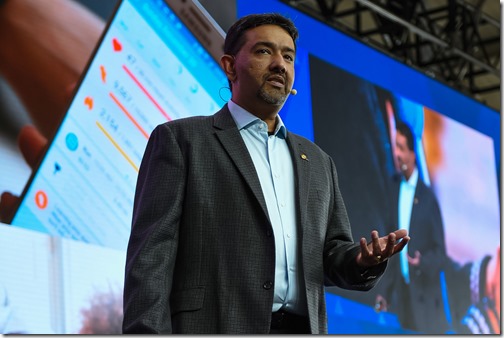 Let’s take a concrete example of something with an immediate benefit: several of the scenarios highlighted at the Forge DevCon were about the future, but this one’s about API functionality that’s available today.

The project I’m spending most of my time working on, at the moment – which we’re calling Dasher 360 – is a Forge Viewer application that integrates and displays data from our IoT back-end. One thing that Dasher 360 does is parse all the property data in a model to determine where the sensors are located, what rooms are on what floors, etc.

Right now this work is done every time a model is loaded in every browser. So the same work – during the lifetime of an application – could be performed thousands upon thousands of times. The amount of computation needed to do this is non-trivial and completely unnecessary.

The reason we do this is that the former “View & Data API” only allows access to this property information on the client-side, in the browser: so we simply had no other choice.

With the latest round of Forge APIs, we can now use the Model Derivative API to do the same operation exactly once on a server when the model is added to the system. We can save the results in a database and serve them up as each client session loads.

Eventually we may even be able to decouple visible from non-visible data and have the viewer receive (directly) only what it needs to display geometry: that would make the experience lightning fast, for those scenarios where this is of benefit (mobile VR comes to mind: an environment where you are unlikely – for now, anyway – to want to bring up the properties for an object). But that’s another question – for now you’ll still get the property data for display by the viewer, you just won’t have to continually crunch it to get the navigation (etc.) information you care about.

Anyway, this is work that I’m motivated to take on at some point over the coming weeks. I’ll keep you posted on how it turns out.

Back to the conference, itself… the official photos for the event have now been posted to Facebook and Flickr. I found a few of me that I’ve included below: they may give you a sense of some of the fun (and some of the stress) I had.

As “owner” of the VR/AR presence at the DevCon, I spent quite a bit of time making sure speakers were ready, and that their classes started on schedule and that people knew about them. Here’s me tweeting information about the HoloLens class, for instance: 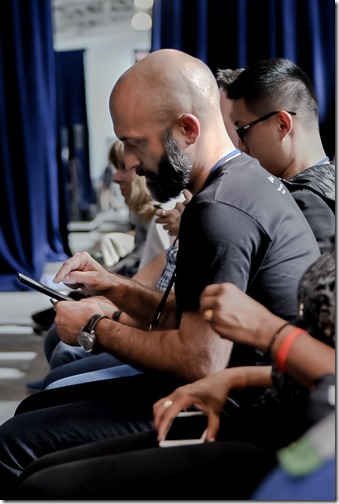 I also had a few classes to present, myself. Here’s me saying something really important about VR. At least I assume so. 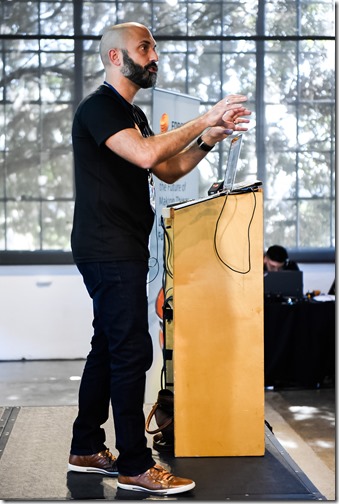 The audience for the VR session was really fun – here’s a shot of many of them immersed in a collaborative VR experience. 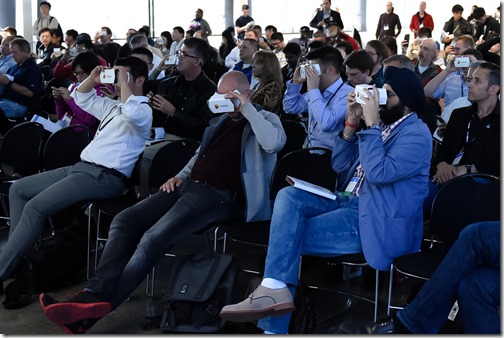 The other session was with my friend and colleague, Alex Tessier. He did the bulk of the work, I just had fun showing off some of the things I’ve been working on. 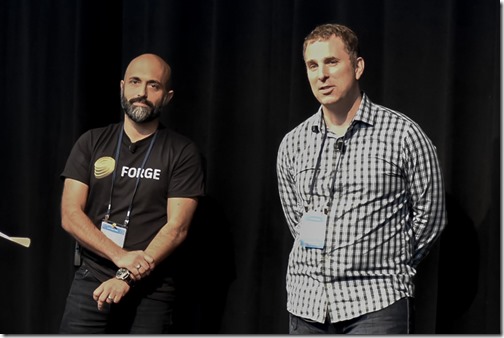 It wasn’t all work, though. The 3D Web Fest gave me the chance to kick back and share a beer with Josh Carpenter (the bar had closed just a few minutes earlier, so we only had the one between us) and live-tweet the proceedings. It was really fun seeing all tweets tagged “#3DWebFest” showing up on the big screen. The temptation was more than I could handle. 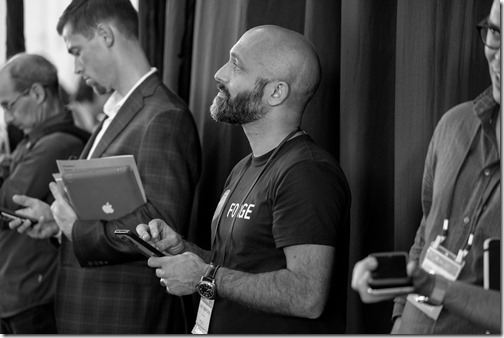 So, there you have it. I’ll be reporting more on Forge as the platform evolves, as you might expect, but things are off to a great start.