After a hectic week in SF, I was looking forward to some relaxation, back in Switzerland, despite having a few visits planned for this week. It didn’t quite work out that way, but it was all for the best.

On Tuesday I spent most of the day with Hurni Engineering, a very close partner based in La Chaux-de-Fonds, the centre of the watchmaking industry – and the home of Le Corbusier and Louis Chevrolet – in Switzerland. I visited alongside Martin von Wartburg (our manufacturing industry salesperson for Switzerland) and Peter Schlipf (the Forge Partner Development Manager for EMEA). It was a fun and interesting visit: we spent much of the time discussing Forge and going through possible scenarios for applications. Including my favourites, IoT and VR. :-) 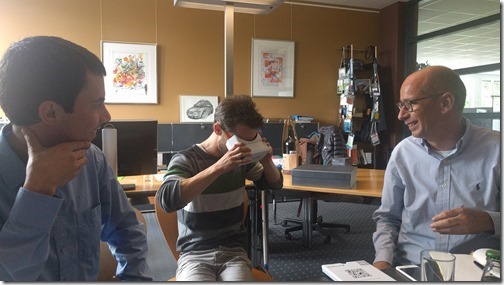 Our visit happened after popping by Patek Philippe – we didn’t actually visit their office, just looked at the outside – as Peter captured in this tweet:

On Wednesday I offered to take Peter across to Lausanne to EPFL to visit SkeletonCAD. The “fun” bit being we’d be taking secondary roads and driving in a somewhat atypical vehicle. We had a blast!

Today (Thursday) I was in CERN for the morning – again to talk about Forge alongside Peter and Martin – and scooted back across to EPFL for the afternoon to talk about Autodesk, VR and the 3D web. It was a very different crowd – Sports Management students from AISTS, about 50% of whom raised their hands when asked by another presenter (my friend and host, Thomas Kienzel from edddison) if they knew the difference between 2D and 3D, although I'm sure some were being shy – but it was nonetheless an enjoyable session.

Presenting #EPFL with @ThomasKienzle and @keanw to a group of students about #BIM , VR and #forge pic.twitter.com/BCedMEyBF4

Over the next few days I'm going to be digging deep on internal tasks, but I'll certainly be blogging about something tomorrow: if nothing else I want to reflect on the DevCon, now that it's a week in the past, to discuss key takeaways.