10 years of Through the Interface

Last week this blog sailed through the 10th anniversary of its first post. I can’t believe how time has flown… posting 3 times a week for a decade has resulted in 1,448 posts, accumulating more than 6.2 million pageviews. I suppose when something’s so much fun you don’t really see time passing.

Visually, the blog has changed a few times, over the years… 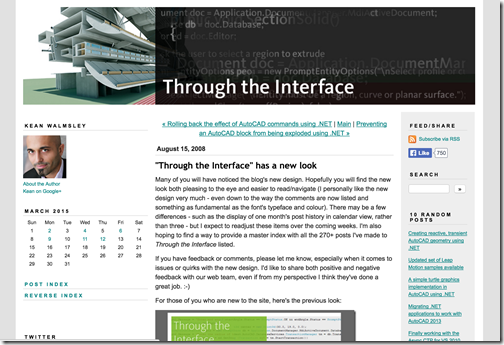 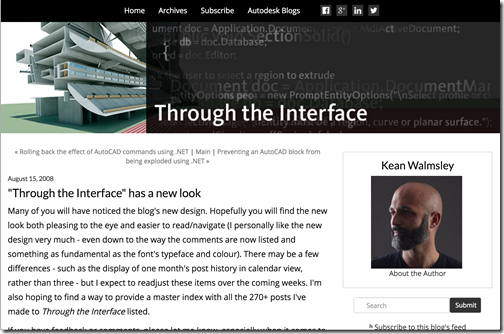 (There’s a 4th theme that is still in the works, but I’ve hit a bit of a wall with the content transfer… I’ve noticed that backslashes have been filtered from the various code samples. I need to fix that before it goes any further, clearly.)

The blog has also evolved in terms of content, as my own role at Autodesk has changed. When I started blogging I was working in the Autodesk Developer Network team, and later moved to the AutoCAD engineering team. “Through the Interface” started as a way for me to engage with the developer community but also to help people get to grips with AutoCAD’s (then still new) .NET API. That focus continued during that period of my career, although not exclusively.

It’s thanks to this blog that I’ve been able to indulge my passion for exploring connections between design software and adjacent technology (such as F#, Python, Ruby, Photosynth, Kinect, Leap Motion, SensorTag, IoT, UAVs, robotics, AR, VR…). These explorations have in turn led to me connecting with like-minded people inside and outside of Autodesk, which has been rewarding at many levels.

So it was that my role changed, 4-5 months ago, when I moved into Autodesk Research. I’m now spending much more time working with the Forge platform: for my various projects I’m consuming Forge services and components but I’m also now part of a team that’s working to contribute services to Forge.

I’m now somewhat inevitably blogging more about Forge, which in many ways “feels right”: this is the next big leap for Autodesk and its community of developers, and I think many of the same challenges exist today with the Forge platform that did with AutoCAD .NET a decade ago. Forge is the next frontier for software development in the Autodesk ecosystem, and now is the right time for me to spend more time working with it and sharing these experiences with all of you.

Don’t worry, though – I don’t plan on uninstalling AutoCAD anytime soon. Desktop design software is going to be around for many years (perhaps even decades) to come. I’ll certainly be rolling up my sleeves and putting together the occasional AutoCAD-based code sample to share here. (And then there’s always the AutoCAD DevBlog, which is still going strong, too.)

Thanks to all of you for reading this blog, whether you’ve travelled along with me for the full decade or just a part of it. It’s been a wonderful journey, and I’m looking forward to seeing where we end up next. :-)