Now that the Tech Summit in Montreal is over, I’m busy with the last bits and pieces in advance of the Forge DevCon in San Francisco. I know I mentioned at some point that I’m helping organise the VR/AR presence at the event – working with internal and external speakers and exhibitors – and it’s taking up most of my spare cycles, at the moment.

I’m presenting one of the VR sessions myself (as well as co-speaking during an IoT session, but that’s another story): one focused on using the View & Data API to implement VR for Google Cardboard. I’ve just spent the last day or so upgrading the Vrok-It sample so that it works with the WebVR 1.0 spec, which hopefully means it’ll work not only with Google Cardboard but also with other mobile VR solutions such as Gear VR and Daydream and even tethered VR solutions such as the Oculus Rift and the HTC Vive. At least that’s my hope – I’ll certainly be trying the various platforms out at the DevCon, to see how it works.

I really think WebVR is the future of VR. We’ll have a number of WebVR-centric speakers and exhibitors at the Forge DevCon: apart from my own speech, Tony Parisi will be introducing WebVR while Josh Carpenter – who is now working at Google on their WebVR support in Chrome – will be talking about UX in VR (and I expect will have something to say about WebVR, too). In addition, Samsung will be demoing their WebVR-enabled Internet browser on Gear VRs in the exhibit hall. All in all it should be very interesting!

On Daydream… for those of you who haven’t heard about this, it’s the latest in a long series of shiny things to hit the world of VR. It was announced at Google I/O, a few weeks ago, and consists of a high-end phone specification and a software runtime based on the upcoming Android N platform, as well as a Wiimote-like controller that is a required part of the Daydream system. 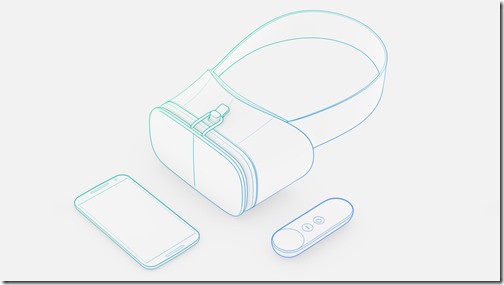 Everyone was expecting a VR-related announcement to be made at Google I/O, but most people seemed surprised by the specifics. The main takeaway is that Google is heading down the path first travelled by Samsung with the Gear VR: making a low-latency, high-performance mobile VR platform to make consumer VR more accessible. They’re publishing stringent requirements and will sell their own reference implementation, much as they did with the Nexus phone. In fact the Nexus 6P is the recommended phone for people to give Daydream a try, even if it doesn’t quite meet the hardware requirements (I’ll be buying the next Nexus phone that does, that’s for sure).

The fact the platform comes with a standard – and simple – input device is a big deal. I’ve spent a lot of time over the last few years researching alternatives to this type of peripheral – whether using gestures and voice recognition or having someone curate the VR experience for you – and Google’s is definitely a simple and pragmatic approach. You can’t beat having something physical in your hand: we’re most comfortable manipulating physical objects, after all.

If you’re interested in catching up on the VR-related news from Google I/O, here’s a handy playlist that someone on the WebVR mailing list put together:


I haven’t watched it all, myself, but the ones I saw were interesting. My colleague Joel Pennington was in the developer panel talking about Project Tango, in case that’s of interest to you (Joel will be talking about the project he’s working on at the Forge DevCon, too).