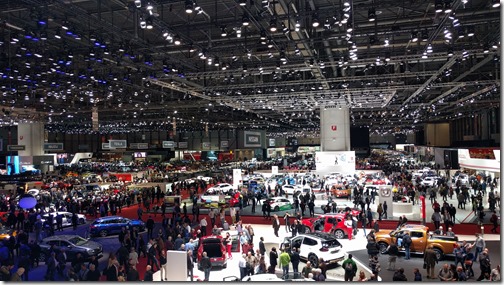 After a nice week on the slopes – children in Neuchâtel have their annual “semaine blanche” around March 1st, the day the canton celebrates becoming a republic – I eased back into work this morning by heading across to Geneva for the 86th “Salon de l’Auto”. I was there when the doors opened so I could make it home for a late lunch.

As usual there was plenty of shiny on display at this year’s show. I liked the fact that I could watch the reflection in the paintwork of a physical car of a video that was certainly computer-generated before the car was completed. With its own reflections of a synthetic environment outside its windows, of course. All very meta. 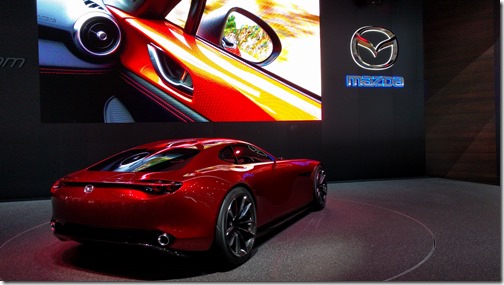 My initial goal was to swing by the stand of the Morgan Motor Company to check out their EV3, an electric version of their 3 Wheeler. Morgan made heavy use of Autodesk’s CFD tools when creating the design for this beauty, something I hope to speak to Jon Wells about, at some point. 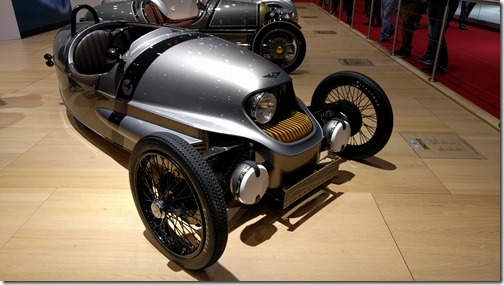 It wasn’t the only electric car on display, of course. I also popped by Tesla’s stand to see the Model X – the only one of them in Europe, so far – as it’s also a car I’m very interested in. We test drove the Model S last year, but it was always clear that the X would be more practical for my family. I’m looking forward to getting the chance to test-drive the X sometime later in the year. Whether I ever end up buying one is another question entirely, of course. 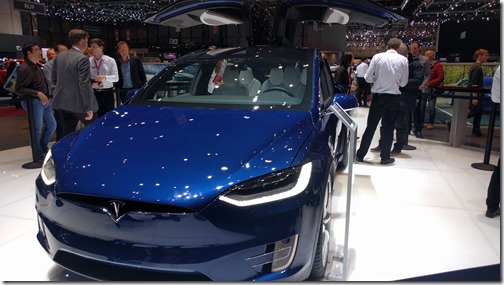 In my new role in Autodesk Research – with a focus on IoT and VR – I was curious to see what automotive companies were doing in these fields. I went by the Ford stand to try their consumer-centric VR experience. 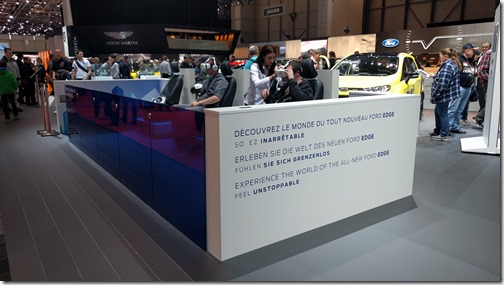 Frankly I was disappointed: you sat in a virtual car as it displayed a bunch of autonomous capabilities and other advanced features… which was fine. But the rendering wasn’t even stereo – as far as I could tell – so it was just another way of visualizing panoramic game content. It seems a shame to go that far engineering an experience and not actually deliver 3D content. Not that I’m a VR purist, or anything… it just goes to show that requirements around the use of VR from a consumer/entertainment perspective are different: I don’t think I’d have cared as much about such visual “quality” if I’d been using the tool for design visualization. But I was there to be wowed!

I didn’t try VR at this stand, but judging from the body language I’m not convinced this experience was much better. I do love taking pictures of people immersed in VR, though. 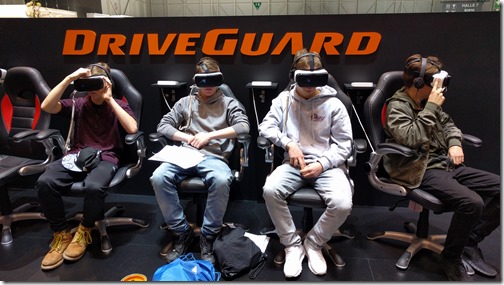 On the IoT front, Volkswagen had a “late stage” concept car on display called the BUDD-e. 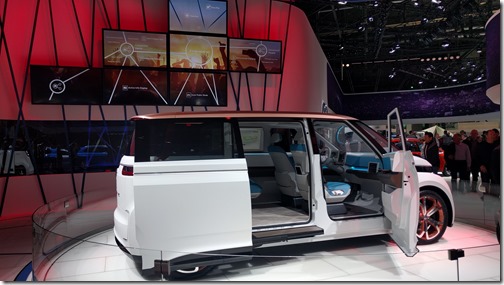 To find out more about the car, I went to one of their information islands and navigated through the available feature descriptions by placing a special hockey puck-like object on their digital tabletop and rotating it around to highlight the various features. I then had to wait several seconds for the related description for each to be displayed. Completely unintuitive and pointless: they had to have someone standing there to explain how to use it (or perhaps to stop people from stealing the puck ;-). Features of the BUDD-e included the ability to check the progress of your washing machine from the car (yes, they seriously listed that as a feature), hand gestures to open the doors and voice control to adjust the car’s temperature. Why? Because they can.

All that said, I do believe there’s a lot of real value in both VR and IoT, and it’s inevitable companies will overshoot the mark from time to time as the technologies work their way through the Gartner Hype Cycle. Which is fine: I’m all for exploring possibilities. The real value will emerge, over time, until the technologies are so commonplace as to be considered completely mundane.