One of the coolest news items to break during AU 2015 was the collaboration between Autodesk and Airbus to design and 3D print a groundbreaking new partition for the A320.

Partitions are certainly not the sexiest part of a plane (not that I have a particular opinion on what that might be… the undercarriage, perhaps? :-) but even they can have a significant impact on its performance and therefore the environment. Each A320 currently sports a 65kg partition at the back – separating the passenger compartment from the galley – that supports two crew seats and can be opened in medical emergencies to make space for a stretcher. 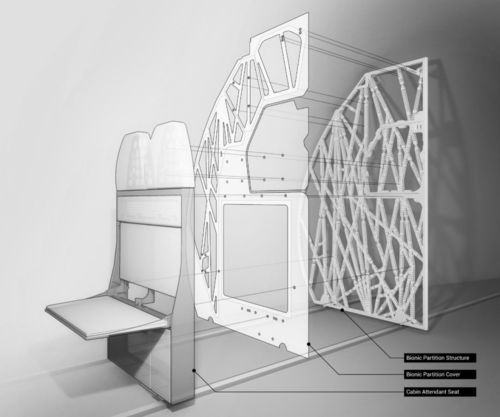 The aim of the project – undertaken by the Airbus group’s APWorks and The Living (an Autodesk studio) – was to design a partition that’s 30% lighter while maintaining or improving its structural properties. When you think that there are around 6,500 of the A320 family in active service – with another 5,500 on order – that’s a significant environmental impact. Airbus estimates that this could save 465,000 metric tonnes of CO2 emissions per year!

Like many generative design projects, the team took their inspiration from the natural world. Specifically from physarum – a type of slime mold – that efficiently creates redundant networks while seeking (and linking) its food sources:

Physarum sends out tendrils seeking food: those that find it are strengthened, while those that don’t wither away. This basic algorithm was used with Autodesk’s Project Dreamcatcher to generate tens of thousands of design alternatives and effectively explore the solution space for this problem. The system was deliberately designed to evaluate options that were outside the space a human designer would typically consider.

Once they had rich data regarding the various designs, the team used data visualization techniques to compare their performance against the two main objectives: low weight and low displacement under structural load. 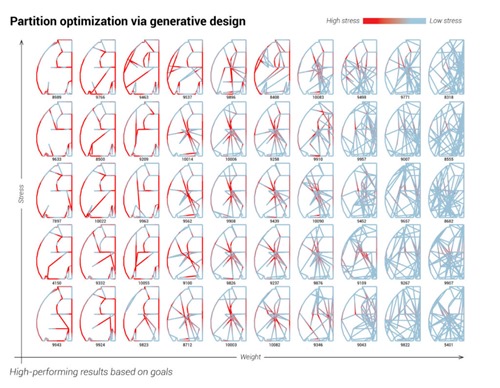 It’s here that the designer places a key role in the process, once again: using their intuition to guide the appropriate trade-off between how the designs meet the stated objectives.

Once a particular design was selected, it didn’t end there, though: just as nature often works at multiple scales (I do love fractal ferns) generative design was used to lightweight each of the “macro” bars, replacing each with a set of micro bars of varying thickness and strength depending on the load they needed to support.

Of course extensive testing was performed, both virtual (FEA) and physical. Luckily the results were consistent: the physical objects failed in highly predictable (and predicted) ways.

The technology doesn’t yet exist to 3D print the entire partition in one piece (although in 2-3 years time that’s apparently likely to change), so it was divided into 122 parts that were printed in Scalmalloy and assembled using 40 titanium connectors. 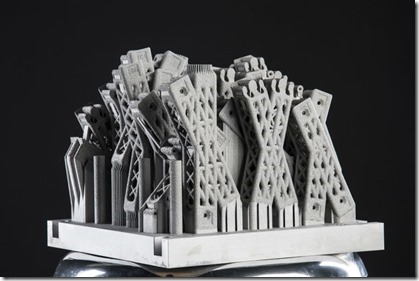 These connectors only add 2-3% to the overall weight, and allowed the partition to be crated up and transported to Las Vegas for display in the AU Exhibition Hall. The question remains – longer term – of the appropriate fabrication granularity for this partition: having it all in one piece is probably desirable, structurally speaking, but if there’s damage to it then you’d need to replace the whole thing. Time will tell what makes most sense.

So how did the partition perform? It ended up being 45% lighter – at 35kg – while being slightly stronger – it had a displacement of 99m rather than 108mm – and otherwise performed comparably to the original. 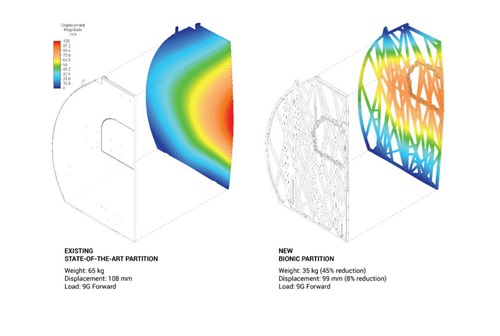 If you’re interested in learning more about this fascinating project – and the broader use of generative design in our industry – then I strongly recommend watching the recording of the Computational Design Symposium held at AU (David Benjamin and Bastian Schaefer talk about the project at the beginning of Part 2 – their talks from REAL 2015 are also online). This is an extremely interesting area that gives a great sense of where the broader industry is heading.