Yet another blog design on its way

Over the holiday break I decided to create a new home for Through the Interface, one based on self-hosted WordPress. While I’ve invested many hours in my use of Typepad, over the years – some fruitfully, others less so – I really felt it was time for a change.

This decision isn’t without its challenges: I had nearly 1,400 posts to transfer, plus external links that need to be re-directed (which can only really be done by keeping the Typepad site alive… they don’t allow people to create their own 301 redirects, which means I’ll have to do use some JavaScript to force that to happen). The good news is that I’ve been able to map the old URLs to the new ones, so…

… is likely to become this:

This should make the redirect – and allow people to find their way to the new blog from old links – much simpler. And letting people find the blog by typing “keanw.com” into their address bar will hopefully be helpful for people, too.

The site is still “under construction” – a friend is working on a new banner image, for instance – but here’s a sneak peek. If you’re interested in taking a look at the new site and providing some feedback, please let me know by posting a comment from a working email address (or just email/tweet me): I’ll send you the login instructions. A big thanks to Andre, Clint and Alex for the input provided, so far!

Here’s an example of the site in a destop browser: 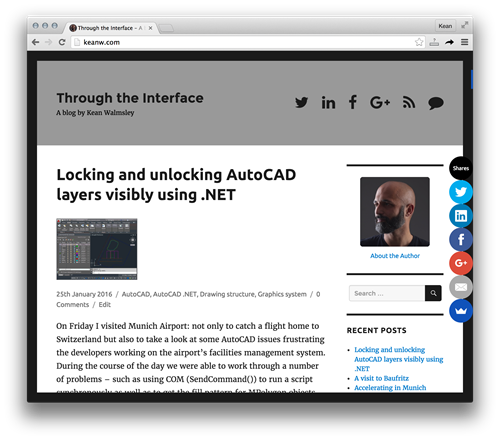 And here it is on mobile. This version has infinite scroll enabled, as well as a menu providing access to search, categories and date-based archives. 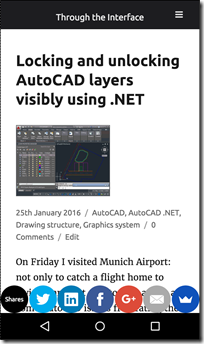 All of this is very much a work-in-progress, subject to change, etc. etc. (Especially if there’s actionable feedback.) The overall plan may yet even be completely ditched. I have to say that I’ve fallen in love with WordPress as a platform, though. Between plugins and code snippets it’s really possible to do pretty much anything with this platform!

Based on feedback, I’ve removed the sharing buttons and added a translator widget (on desktop, anyway… I’ll have to see if there’s a clean way to make this work on mobile).

In case anyone’s wondering what I’ve found the “killer feature” of the WordPress version to be, so far… in a word it’s SEARCH. Yes, search on the WordPress version actually finds posts, even when the search terms are there in the title (it always stuns me that Typepad often fails on something so fundamental). How exciting is that? :-)