This question came up during last week’s accelerator, and is part of the reason I spent creating the last post: is it possible to selectively unlock certain layers for the duration of commands that have been specified by the user? Let’s take an example: you have layers that should remain locked, apart from when using the MOVE command (COPY and ERASE should not work). The approach I took was to maintain a dictionary mapping command names to lists of layers to unlock. When a command is launched – which we can tell using the Document.CommandWillStart event – we check... Read more →

Yet another blog design on its way 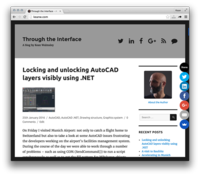 Over the holiday break I decided to create a new home for Through the Interface, one based on self-hosted WordPress. While I’ve invested many hours in my use of Typepad, over the years – some fruitfully, others less so – I really felt it was time for a change. This decision isn’t without its challenges: I had nearly 1,400 posts to transfer, plus external links that need to be re-directed (which can only really be done by keeping the Typepad site alive… they don’t allow people to create their own 301 redirects, which means I’ll have to do use... Read more →

On Friday I visited Munich Airport: not only to catch a flight home to Switzerland but also to take a look at some AutoCAD issues frustrating the developers working on the airport’s facilities management system. During the course of the day we were able to work through a number of problems – such as using COM (SendCommand()) to run a script synchronously as well as to get the fill pattern for MPolygon objects (this is apparently broken in .NET) – but there was one I had to bring home with me: when locking and unlocking layers programmatically, their geometry... Read more →

Knowing how thoroughly I’d enjoyed my visit to JPF-DUCRET with them, our friends at hsbcad suggested I tag along to a visit they were making to the leading maker of ecological, pre-fabricated homes in Germany, Baufritz. So yesterday Peter Schlipf (from our ADN team) and I headed across to the Baufritz office in Erkheim, about an hour’s drive west of Munich. On the way we met with colleague Krisztian Hegedus, who happens to live in a Baufritz home and was also keen to find out more about the company who’d built it. At Baufritz we were welcomed by Kris... Read more →

It’s been a hectic – but very fun – few days in Munich, working with a group of 60-70 developers from all over Europe who are getting started with Autodesk’s cloud services. I’m particularly focused on those working with AutoCAD I/O, which means probably 5-6 companies in total. Here’s a quick summary of some of the problems that have come up, many of which are for pure AutoCAD… Draw Order warning One developer has a long-running custom operation that presents the following message: AutoCAD Warning: This operation may take a long time. To greatly improve performance, the system can... Read more →

In Munich for the European DevDay

The snow arrived, at last, and it’s amazing. I spent the weekend on the slopes with my family before heading across to Zurich to hop on the last flight to Munich, last night. I had a sinking feeling, on arriving at the airport, as the information board said “More information at 20:15”. This is generally not a good thing for a flight that’s scheduled to leave at 20:15. In the end it was a mere 45 minute delay – which was quite the relief – which gave me some time to watch another episode of the excellent Mr. Robot... Read more →

The first 3D print from our Ember

My friend and colleague, Fernando Oliveira, had the honour of printing the first object from the Ember printer we have in the Autodesk Neuchâtel office. To capture the moment, I decided to take a few snaps that I’ll share here. The design work was all done in Fusion 360. The design is a logo comprising of Fernando’s daughter’s initials. The printing process was managed by Print Studio, part of the Spark platform. I included the below shot – despite it being out of focus and not especially flattering – because it gives a view from our corner lab across... Read more →

Controlling robots from inside AutoCAD – Part 4

I wasn’t planning on writing another part in this series, just yet, but then I got a little carried away with some refactoring work and decided it deserved a post of its own. I wasn’t fully happy with the code in the last post. The DecomposeCurve() function simply did too much: it opened a curve, extracted the points we were interested in and then created “movement” strings for each segment connecting the points. So the function was just way too single-purpose, even if a number of the individual operations being performed could potentially have been of use elsewhere. So... Read more →

Controlling robots from inside AutoCAD – Part 3

After seeing how we can use Cylon.js to control Sphero’s Ollie and BB-8 robots from a browser, and then using the same mechanism from inside a custom AutoCAD command, today we’re going to drive these cute little bots based on AutoCAD geometry. The idea is that we’ll decompose regular curves – whether lines, arcs, polylines or splines – and use the “segments” as movement instructions for our robots. The approach is simple enough: we’ll iterate along the length of each selected curve and generate a set of instructions – really just a set of angles – for the associated... Read more →

Controlling robots from inside AutoCAD – Part 2

After looking at how to control robots using Cylon.js in the last post, in this post we’re going to get that working inside AutoCAD. For now with just a command that allows us to move the robots – in a future post we’ll analyse geometry and use that to specify the movements. The “controller” code we saw in the last post needed a little updating for use in this way. I went ahead and stripped out the keyboard-related code – as we’re using behind a web-service – and added the capability to control individual robots. We want to be... Read more →

Autodesk is holding its first Autodesk Forge Accelerator from March 14-18, 2016 in San Francisco. I say it’s the first, but it’s really a rebranding of the Autodesk Cloud Accelerators that were held earlier this year to have the same moniker as the recently announced developer platform, fund and conference. The “call for proposals” started just before the holiday break, and will remain open until January 31, 2016. So there are just over 3 weeks left to submit your sub-2,000 word proposal on how you intend to use an Autodesk web-service API during the accelerator. These currently include View... Read more →

Controlling robots from inside AutoCAD – Part 1

Happy New Year! I hope that those of you who celebrate at this time of year, were able to take a nice, relaxing break. I certainly did. :-) Anyway, it’s now time for me to ease back into work. But rather than it being an abrupt transition, I’ve decided to take a look at a pet project that I thought would be pretty fun: controlling robots from inside AutoCAD. The thinking is to outline some possibilities for moving virtual robots inside a floorplan drawing and having their real-world, physical counterparts move as instructed. Perhaps along a specific path, perhaps... Read more →