The Force Awakens in AutoCAD

Some of you may remember this series of posts from the beginning of the year (I also mentioned it in the last post). It showed how you might use AutoCAD and .NET (in this case via F#) to animate the Star Wars opening crawl for the first 6 movies.

Back then I said I’d update the video series to include Star Wars Episode VII: The Force Awakens, once it was released. Today is that day… due to some bizarre accident of international scheduling, I got to see it two days ago, here in Switzerland. I took a few snaps of the opening crawl and sent the transcription across to Paul, who owns and maintains the Star Wars API (SWAPI) which my code uses to get the crawl text for the various films. Paul kindly updated the API, then it was just a matter of tweaking my code to allow entry of the number 7 at the prompt for the episode number.

So here it is: the opening crawl of The Force Awakens inside AutoCAD 2015 (to be consistent with the other videos I captured – it also works fine in 2016). You may not want to watch this, if you haven’t seen the movie and want to wait until you have.

I thoroughly enjoyed this film. Maybe not quite as much as these guys – who were watching the evening showing after the one I saw – but I actually do think – despite the usual concerns about some aspects of the plot (contains spoilers) – that it was the best of the series, so far. Including the original trilogy. I did not expect to be saying that, but there you have it. 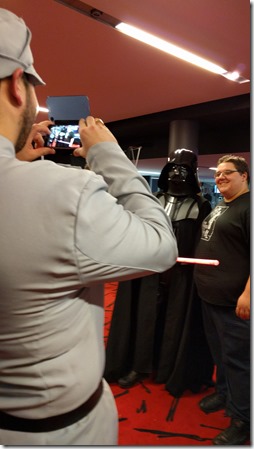 I’ll be going back to watch it again with the kids, as soon as I get the chance. No, I didn’t take them, the first time, as I needed to research the level of violence, etc. (ahem.) Anyway – I’m now convinced I can take two of my three without any issues (the youngest will get to watch it once it gets released for smaller screens).

If you get the chance to watch it over the coming days, enjoy!