As mentioned in the last post, although I’d visited the Exhibit Hall at Autodesk University a couple of times during the prior days, it was really on Thursday that I spent the most time there.

One of the highlights, for me, was in the hall leading to the Exhibition Hall itself: the AU Hive. This is the project I’d been introduced to when visiting the Applied Research Lab on Pier 9. It was an interesting experiment in how humans and robots – coordinated by a “controlling intelligence” – could achieve more together than they could separately: to build a structure – designed using Dynamo – comprising 224 unique pieces, each of which needed custom assembly by both man and bot. 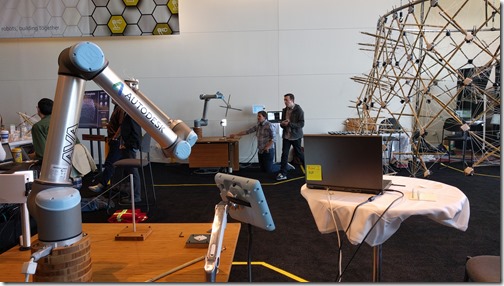 Over the course of the event, humans put in 67 man-hours to complete the structure. I really liked the fact AU attendees could track the progress in real-time via an option in the AU 2015 app many of us had installed on our smartphones:

The final, 224th piece was built by Amar Hanspal (human) and Chappie-bot (robot). 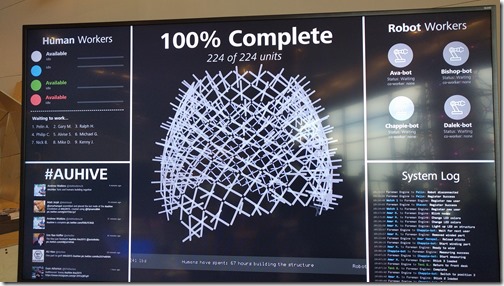 Here’s me checking out the completed structure from the inside: 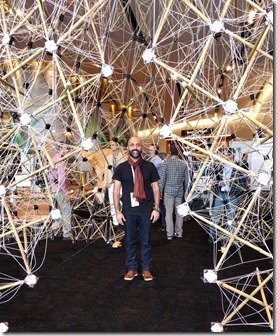 In the Exhibit Hall proper I spent most of my time engaging with visitors to the AutoCAD booth. There was a really nice activity to gather feedback on where to spend our development efforts: AutoCAD users were given LEGO bricks – coloured according to their industry segment – which they could place in the focus areas of most interest to them. Here’s a sequence of shots of Mike Mizuno, AutoCAD Product Manager, capturing the state of the structure using a Freestyle3D scanner borrowed from the FARO booth. You can see the height of the “Anytime, Anywhere” flag!

Away from the AutoCAD booth there was, of course, plenty to see. With the shift in the manufacturing industry – and Autodesk’s business – you inevitably couldn’t go far before tripping over a 3D printer, a CNC mill, or something made by either one or the other.

A crowd-pleaser was Makr Shakr from Italy: robotic barmen (barbots?) that mixed cocktails ordered via an tablet. My first order – a “Fusion Fizz” – was a) boring to watch, as it was stirred, not shaken and b) tasted awful.

I’m fundamentally an optimist, when it comes to technology, so I wasn’t easily deterred. Assuming the second cocktail was destined to taste bad, too, I chose a cocktail where at least everything would be shaken, to make for a more fun video. Here’s a quick animation of my “The Future of Making Things” being shaken.

If anything this cocktail was way worse than the first – what did I expect from a concoction containing both tequila and Blue Curaçao? – but at least the video was fun. And I have to believe it was my choice of cocktail – and perhaps the recipes needing some work, although apparently I could also have tried inventing my own – rather than it being due to a technological problem.

An interesting moment for me was before the hall opened properly on Thursday… one of the Makr Shakr humans was cleaning up before the robot was due to start its work. I seriously hope that wasn’t a vision of the future! (As a side note, the closing session kicked off with a video version of this Onion News Network article… at least someone’s keeping a sense of humour about all this. :-)