Autodesk University 2015: the story so far

Over the years I’ve settled into a rhythm that works well for me, with respect to attending AU: I fly in on the Saturday before the event – from Geneva via London Heathrow – and so have the Sunday to decompress before the ADN day on the Monday. This year the DevDay was focused mainly on Autodesk’s burgeoning PaaS layer – with significant focus on Fusion 360, too – with much of the “general design” content covered in a breakout in the afternoon. If you’re an ADN member, I do recommend checking the material online – or coming along to an upcoming DevDay – as there’s a lot of great info, as usual.

In the evening I ended up hopping between three events before getting an early(ish) night: the ADN party, the Speaker Social and an internal mixer for the AutoCAD & Cloud Platforms teams.

Tuesday kicked off for me with an 8am class on VR. The session was “sold out” – with a capacity registration of 110 – and I think most people actually showed up. Which I found pretty surprising, given the number of parties the night before.

I’ve presented Vrok-It a few times, now – and have learned that it’s still a little hit or miss in terms of whether it’ll work with someone’s phone – but people generally managed to participate in the demo. The ADN team very kindly provided Google Cardboards for most attendees (a few went without), and it was fun to see everyone connecting into a single curated VR session: 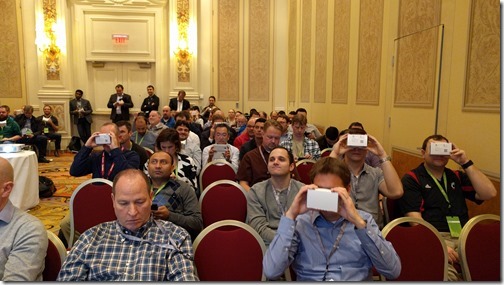 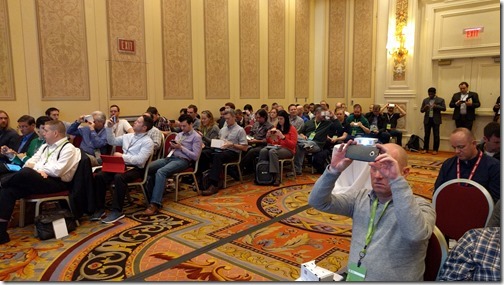 I unveiled a new work-in-progress version of Vrok-It at the end of the session – finally working with a single stereoscopic viewer – but the focal length is still a little quirky and I need to fine tune it before blogging about it more.

After the first class I was pulled into a meeting with a large customer before attending the opening keynote. As I was running a little late I didn’t get let into the main hall – it was at capacity, so I ended up watching on a big screen in a separate room. A little disappointing, but understandable. You’ll see pretty much what I saw if you watch the on-demand replay. Inspiring stuff – well worth taking the time to watch it.

Then it was off for a quick lunch before attending a couple of great sessions by Autodesk colleagues: Nop Jiarathanakul’s on WebGL and Albert Szilvasy’s on AutoCAD I/O. (I’ll be giving my own AutoCAD I/O class in about 3 hours’ time.)

The working day wrapped up for me with the AutoCAD API “Meet the Experts” panel. The format was a little different, this year: in addition to fielding questions from the audience, the panellists each took 5 minutes to talk about and/or demo something interesting. I chose to show my sample that automatically maps Zork inside AutoCAD, which was fun. :-)

The rest of the day was spent in the Exhibit Hall – which was just amazing, this year, photos to follow – and at an “AutoCAD Fan Party”. As usual, I’ve met a lot of really interesting people at this year’s AU. And we’re only at the end of day 1!

I’ll report back on days 2 & 3 of AU once the dust has settled. In the meantime I’ll try to put together a post regarding an important announcement that will be of interest to lots of developers, out there…