The future of VR is web and mobile

Last night, I left the (very fun) party at the X Summit a little early: partly because I knew I was presenting this morning and needed a clear head, but mainly to attend a WebVR meet-up being held at Mozilla. I’m rarely in the Bay Area and it seemed a shame to miss the opportunity to attend the event, especially as it was a chance to hang out with Jim Quanci and Goran Borjesson, a colleague visiting from Gothenberg. I’ll describe my experiences of the evening’s proceedings, but you can also watch the online recording.

It was really an interesting event. I’ve been bought into web- and mobile-based VR since my early fooling around with Google Cardboard and our Web & Data API, but for me it’s just becoming more concrete. We heard from Josh Carpenter from Mozilla, who talked about the work being done in both Firefox and Chrome to support WebVR. We’ll very soon (like a matter of weeks/months) have versions of these browsers that are able to deliver 75Hz refresh rates when viewed in compatible HMDs such as the Oculus Rift. I also believe that mobile browsers when used with Google Cardboard – or the Gear VR – are going to start delivering the goods, too.

We also heard from a couple of VR startups, both of whom are working with WebVR. Beloola is a start-up from Lille in the north of France, who’ve had staff stationed in Silicon Valley for the last few months. They’re doing some pretty cool stuff with social VR, much along the lines of Second Life.

We also heard from Vizor, a start-up dealing with the problem of creating interactive scenes for VR. They showed off their Open Source visual programming environment for WebVR. They also had a demo station set up with the (still very rare) HTC Vive, which I was keen to try out. While it’s a tethered experience – and ultimately quite clunky – the positional tracking it provides is pretty cool. 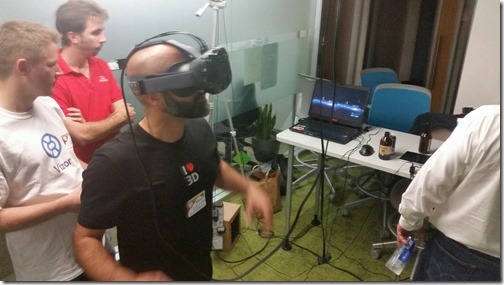 Another interesting technology being demoed was from Realiteer. These guys have come up with a super-simple but extremely compelling concept: a gun-like, cardboard device that you hold in front of you when playing a First Person Shooter (which seems be the sweet spot for VR gaming, today). The device has a tracking marker printed on it and the Realiteer SDK allows you to build games that provide positional information for your virtual arm and the gun it holds. 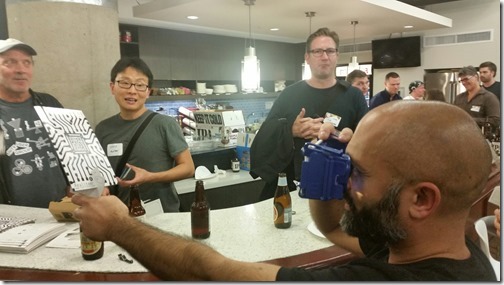 It’s really fun. The down-side appears to relate to power consumption – the additional CPU cycles drain the battery fairly quickly, right now, but this should get better, over time. Love the concept, anyway!

After this morning’s presentation – which went well considering it was the last one of the conference – I headed into the San Francisco office briefly before hopping on a ferry to get up to Marin (and the San Rafael office). Once there, the AutoCAD I/O team took the opportunity to present me with an certificate for my efforts porting Jigsawify.com to their V2 API, which was pretty funny (although much appreciated, nonetheless ;-). 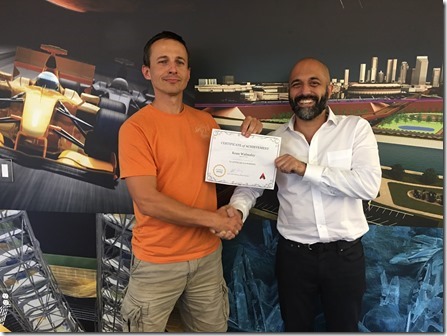 I’ll be working in the office here, tomorrow, before heading back into the city to attend College Night at the Gallery and spend Friday at 1 Market St and Pier 9 before flying back home in the evening.