« Adjusting the size of AutoCAD text and block attributes to fit their containers using .NET | Main | It was 20 years ago today »

Let’s get physical: laser cutting the output from Jigsawify.com

After building a web-site to create files that help make laser-cuttable jigsaws, it made sense to actually go ahead and cut some. In the flesh, so to speak.

My initial findings weren’t good: I’d assumed that I could output 2D solids from AutoCAD – each representing a pixel to be engraved on the jigsaw – and that the laser cutting software (in our case LaserCut 5.3) would at least see the boundaries. But nothing at all loaded – apart from the cutting geometry for the pieces, of course.

In fairness, the question has come up a few times as to why I chose to create the engraving like this. For sure I could have just generated the cut pattern for the pieces and then let the engraving software import a bitmap (whether the original one selected, or a new one output by my site post edge detection). I had a few issues with this… firstly, it’s too manual: it’s not always easy to get the cut geometry to match the engraving. Secondly, engraving can be very time-consuming: I’m hoping that using lines in the way can make it quicker. And thirdly, where’s the fun in just creating the outline geometry? :-)

I did try one pass – on cardboard – with engraving an image. (All of the cuts in this post have used jigsaws created from this image in this previous post, in case.) 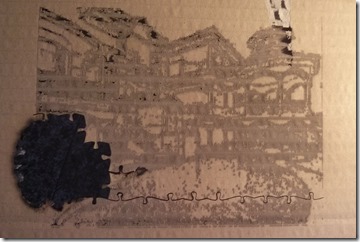 You’ll see a nice big whole in the lower-left corner. Something really interesting happened, here: I was testing with a small scale jigsaw, and the pieces started falling through the gaps in the support grid. Which was OK, but the laser’s beam is more diffuse (less focused) when it goes below the cutting plane, so it ended up setting the fallen pieces on fire! Here’s the other side of the aborted puzzle: 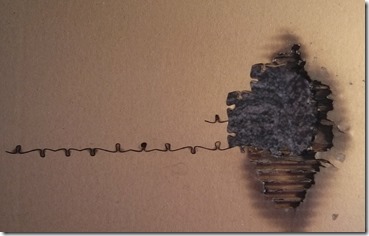 A good reason never to leave working laser cutters unattended (especially when cutting cardboard). Anyway, the engraving was, indeed, super-slow, so I went back to the drawing board, to see how to get my “pixels” across.

Firstly I tried using the REGION command to convert the 2D solids to regions and I then EXPLODEd them into (poly?)line boundaries… but that created way too much geometry.

I ended up settling on a much better solution… one I really like. We now create – on a hidden layer, as the LaserCut 5.3 doesn’t seem to care one jot about layer colouring or visibility – a diagonal line for each pixel and we then run OVERKILL as part of the AutoCAD I/O process to reduce the amount of geometry. This ends up with some nice and simple geometry, optimised for laser cutting.

Oh, and I added DXF output to the site, too, as this saves the manual step of converting from DWG to DXF (most laser cutting software consumes DXF rather than DWG, of course). And as DXFs are generally much bigger that DWGs, I went and added a tooltip to each button to warn people of the size of the file they’re about to download: 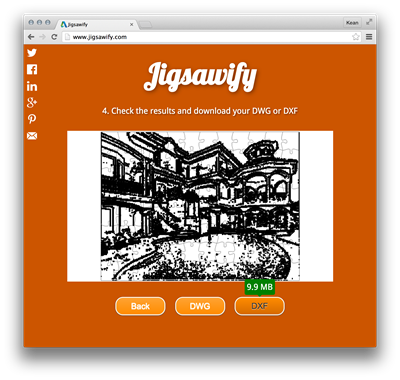 Here’s a pass I made of this type of output on cardboard, once again. I find it gives a really nice cross-hatched – even hand-sketched – look to the puzzle. 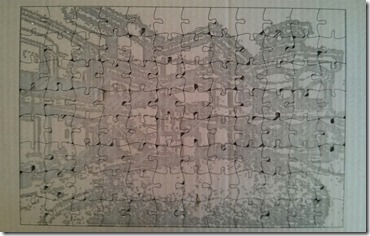 So then it was time to try it with some real wood. I picked up some offcuts from the local building supply store, to see the kind of results I could get. The first of these runs was with 3mm birch plywood. I used a really handy tip from this excellent Instructable to make the lines thicker: if you lower the cutting bed by about 1cm, the more diffuse beam can be used for good, rather than evil, resulting in nice, thick lines.

It does mean you need to do a couple of passes, though. Unless you can control your laser cutter to automatically raise the bed, when needed. Maybe one day I’ll learn how to write a driver for these beasts – might be an interesting feature! 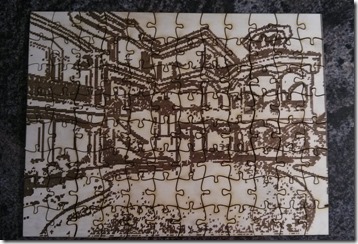 But for now, you have to remember to raise the bed back up between the “engrave” and “cut” passes, of course. I didn’t do that on the below run with vinyl-laminated plywood (bad idea – I probably forgot because I was light-headed from the fumes), as you can see from the additional, thicker, horizontal cut near the bottom of the puzzle. 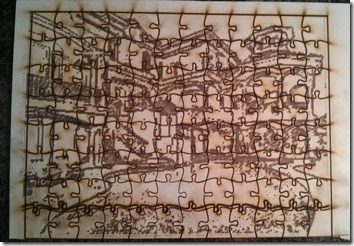 Next it was back to plywood, this time 5mm. I tried a stronger burn for the “engraving”, which gives it some nice texture, but I also found – whether due to this or to other reasons – that there ended up being lots of charcoal dust. Hence all the smudging. 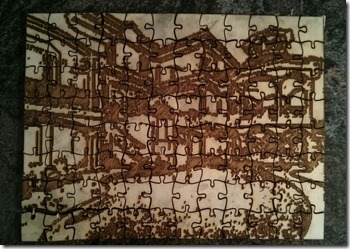 And finally, for fun, I tried it with Plexiglas. This created some really nice pieces, but the contrast is very poor (as you might expect). This was done without diffuse engraving cuts, admittedly, but I don’t expect the results with them to be significantly different. 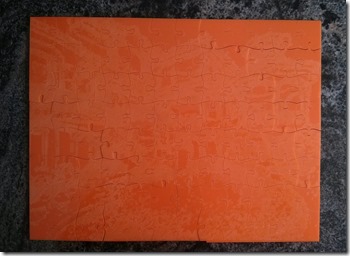 One material I still haven’t tried – and which I think is ultimately going to be the most interesting for these jigsaw puzzles – is good old MDF. I may save that for my next trip to the local Fab Lab (probably in a week’s time), as they typically have it in abundance.

Before I forget, a big “thank you” to my laser cutting partner-in-crime, Nate Moore. He’s been on hand to help with several of the above experiments. It’s been a lot of fun!