After going down the path of making this blog responsive, it made sense to do the same for Jigsawify.com: I think it’s a really nice illustration of the potential for AutoCAD I/O to use the web-site from your mobile phone to generate a DWG in the cloud. The site itself was functional enough on mobile: the issue related more to making the UI usable without having to zoom in and out all the time both to see the results and then use the various UI elements.

The “responsive” technology underpinning the Typepad template I used for this blog is Bootstrap. I decided to integrate this into Jigsawify.com to help its display elements wrap nicely on narrower devices. Here’s the updated HTML page from GitHub:

It seems to work pretty well… here’s the current incarnation of the site running on my old Nexus 4. (I used it to make a jigsaw of the photo I took when preparing this recent post.)

I added fixed sharing buttons (to share the site – it’s unfortunately not possible to share the resulting DWG, as that’s beyond the current architecture) using Shareaholic. It’s easy to configure sharing buttons that are different on mobile versus desktop – here’s a snapshot the of the current page in a desktop browser, for comparison: 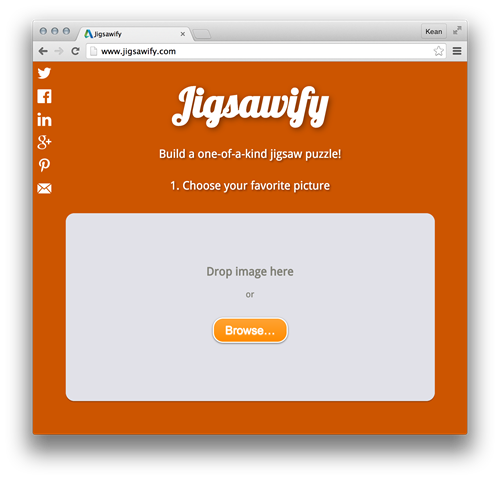 Also, James Meading reported that the site wasn’t working properly on Internet Explorer. It took me a while to work it out, but I finally realised that IE was caching the results of the page’s polling requests checking the status of our AutoCAD I/O WorkItem. So it was as if the REST API was always returning “in progress”. StackOverflow came to the rescue, once again: this page led me here, and I ended up adding a one-line fix to tell jQuery never to cache HTTP “get” calls. So IE should now work well (I only tested on IE11, though).

The next step is to hit the workshop and start validating whether the output from the site generates decent results using a real-life laser-cutter. More on that next week!