So yes, I’m back flying again. I’m not travelling anywhere, though.

Some of you will remember my abortive attempts at UAV piloting from around a year ago. My Quanum Nova has been gathering dust, since then (it’s also in pieces because I tried – so far unsuccessfully – to install a Bluetooth telemetry module). But I’m motivated to get back on that particular horse thanks to a discovery I made a week ago.

On a whim, I bought a micro-drone called the Hubsan X4 H107C. This is an incredible little device: you can pick one up for around $50 and it comes with a built-in 720p camera. I didn’t buy it with the intention of filming, particularly, but I have to say that the resulting videos are pretty decent. And it’s easy: you slip in a micro-SD card and press a button before you take off. 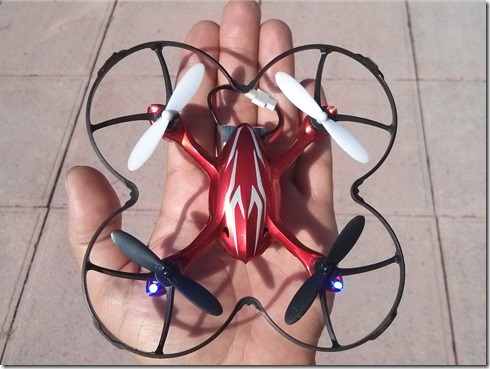 My main reason for buying it was to get more familiar with the navigation controls – building up some much-needed muscle memory – before starting again with a larger drone. Not so much because of the expense of a larger drone – the Quanum Nova only cost around $300 – but mainly because of the risk associated with not being in control of a larger device.

And I have to say it has, so far, worked a treat. The Hubsan drone flies really well and is a great way to learn. And if you lose control of it – which I did, a few times, when taking it above house-level and hitting higher winds – then your neighbours aren’t going to get too annoyed. Especially if you have children to blame it on. ;-)

It’s a surprisingly robust device: I’ve already managed to lose a number of propellers – despite having the handy, provided guard on them – but luckily nearly everything is replaceable at a very low cost.

I still haven’t had the chance to reassemble the larger Nova and take it back up, but I did try my hand at controlling a colleague’s 3DR Solo. This is another amazing drone, but of a very different type. Although the ~$1K price tag seems pretty reasonable, considering what you get: as it comes with the same “orbit” capability I first saw with DroidPlanner, it seems very well-suited for use with Photo on ReCap 360. More on this in a future blog post.

So did flying the X4 help? Absolutely. While I’m still far from being an expert pilot, I did find the Solo super-easy to control (the Solo has *really* good stabilisation) and I didn’t have the same knee-jerk behaviour that got me into trouble with the Nova, last year. For anyone in a similar situation to me, I’d thoroughly recommend this approach. Pick up a small, cheap and – above all – safe drone, make your mistakes with it, then try your hand at flying one with a little more horse-power.

Ultimately, though, I’m still keen to see the technology evolve to the point where human pilots don’t have much to do: me learning to fly is more of a safety measure. (Probably analogous to people learning to drive cars, today… a necessity, for now, but hopefully gradually becoming obsolete for anyone who isn’t a hardcore enthusiast.) A step in the right direction that I just found out about is the Panoptes eBumper4. I don’t know if these guys have an SDK, but having the ability to program in a mode where the drone stays 5m (the apparent range of the eBumper’s distance sensors) away from a building, snapping shots at regular intervals until it gets all the way round, would be just fantastic. Another option is the DJI Matrice 100 + Guidance, although at north of $4K it’s another level of investment altogether.

I dream of having a cheap X4-like device – with a camera lens whose distortion model ReCap 360 recognises – that knows enough about its environment to orbit a building autonomously and feed ReCap the data it needs to generate a 3D model. One day…