Finishing up our laser-cut jigsaw project

I spent some time back down at our local Fab Lab, today, finishing the laser cutting work for the jigsaw project I mentioned previously. Since I last mentioned it, we managed to procure some Plexiglas – in our case it was Perspex, in fact – and cut various sections of the puzzle, with each piece including an engraved word and a hole to make it into a key-chain souvenir. Today’s job needed the additional size of the Fab Lab’s laser cutter – theirs can cut sheets with 40cm on a side, whereas ours can only manage 30cm – as we were cutting a two-part plate (laminated from two pieces of Plexiglas) to contain the completed puzzle.

As we were combining work performed on two different cutters – with different software and drivers – we started by cutting a cardboard prototype, to make sure the size worked. This allowed us to adjust the scale accordingly. 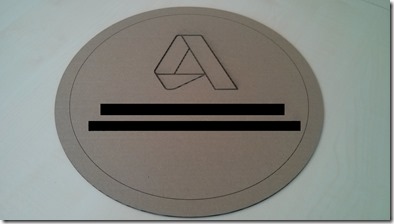 I’ve redacted the words on the plate – and on the puzzle itself – as these are the results of internal strategy sessions and its not my place to air another team’s dirty laundry. And as the team-building event hasn’t happened yet, I’d hate to give my colleagues clues as to how the pieces fit together. :-)

Next we needed to make sure the standard speed and power settings for 3mm Plexiglas worked well with our own sheets. We used a junk sheet for that. Then we were ready to create the plate itself, which we cut from two separate sheets and bonded with glue. 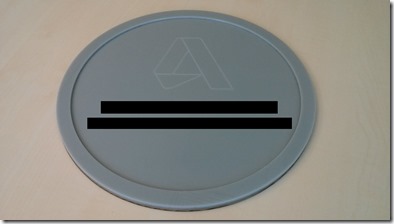 The engraving on the Plexiglas worked very well (it surprised me, in fact). And the finished puzzle looks really nice inside its plate. 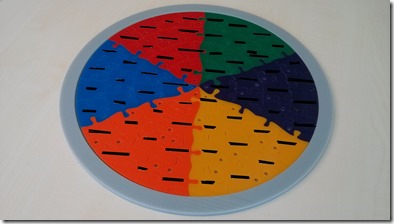 Well done to my fellow Autodeskers, Sylvain and Nate: it was fun collaborating with you both and the results are great.

I’m still working on taking the code we used to generate the puzzle and packaging it as a custom activity to be run on AutoCAD I/O. I’ve created the app package (containing an early version of the code… there’s still work needed to support engraving) and have uploaded it to the service – I’ll be sharing how I did that in due course – but I still need to write the code to call it from the web-site I’ve put together. Yes, it even has its own domain name!