An interesting visit to the SVVR exhibition hall

Yesterday I went along with two fellow Autodeskers, Lars and Oleg, to the Silicon Valley Virtual Reality conference at the San Jose Convention Center. As we were only attending the second day – we all flew in on Monday – we just took passes for the exhibition hall rather than the full conference.

People were lining up to get into the exhibition hall as it opened at 11am (it was only open for 4 hours, in total, closing at 3pm). We chose not to join the queue ourselves – we’d bumped into Damon Hernandez and were having too much fun chatting about the AEC and VR Hackathons that he organises – and got into the hall at around 11:15am. Which turned out to be a bit of a mistake: one of the things we really wanted to do was get a demo of the next generation Oculus Rift, codenamed Crescent Bay. And the line for that was already huge. 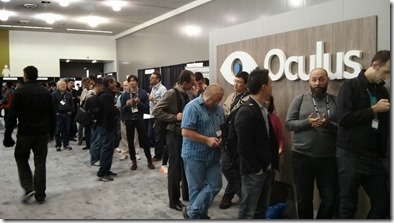 We did much as a number of others did: we joined the queue and took turns standing in line while the others in our party wandered around the exhibit hall and took in the sights.

The focus of the conference was very much on entertainment – that’s the primary frontier for virtual reality, after all – but I would have hoped to see more technologies targeting design visualization. But it’s to be expected, I suppose: people are inevitably chasing the biggest opportunity. The good news is that what works for immersive, long-term use – e.g. for gamers – will end up being more than good enough for more casual (albeit professional) use, such as for engineers and architects. 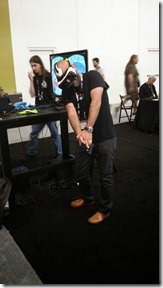 A few things of note…

It was interesting to learning about OSVR – an open source $200 HMD that is probably about comparable to the DK2 – as well as trying the Samsung Gear VR for Galaxy S6, which is a bit better and lighter than the initial edition for the Note 4.

I used the Gear VR for S6 with to play a pretty decent golf simulation helped by a Sixense wireless controller.

One disappointment was not trying the updated Sony Morpheus: I had tried it late last year, but it has apparently received a big update since then. Maybe they’ll be at this weekend’s Hackathon, which means I’ll get to try it there.

Two of the best discoveries of the day actually came from standing in the Crescent Bay line with the same people for close to 3 hours (on and off). I met Jin, the man behind Project Nourished, which is essentially virtual dining. Yes, you read that right. 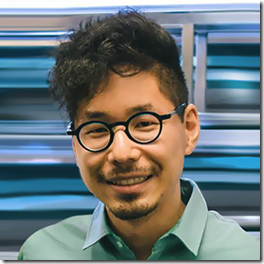 This project is wild: you eat gelatinous lumps that have been flavoured using different algae combinations to match the food you’re eating in the virtual environment. Along with recorded sounds of eating the target foodstuff, it’s apparently it’s enough to fool your brain, allowing you to eat things you may not be able to for health reasons. Crazy!

The second discovery was also really fortuitous. I was demoing the Cardboard sample using the View & Data API to Jin, but I hadn’t brought along my easily crumpled DODOcase. Someone else in the line – a developer named Derek Chen, who had written a really cool VR game – pulled out a set of Go4D C1-Glass goggles by Goggle Tech. These snapped easily onto my phone and gave great visual quality – super-impressive. Aside from folding up and being very portable, they make it really easy to access the screen to provide touch input and also keep the microphone freely accessible for speech input. All in all a great set of VR goggles: luckily they were also exhibiting at SVVR, so Jin, Oleg and I each went and picked some up.


So after waiting 3 hours, was the Crescent Bay demo impressive? It was – it blew my socks off for the 90 or so seconds I had to try it. The visual quality was simply stunning. But it was tethered, and the recently announced Oculus Rift hardware specification is pretty steep… I still feel that for the design visualization space it’s going to be mobile (and even web-based) VR that’s ultimately going to be most interesting.