« Autodesk Answer Days kick off with AutoCAD on May 7th | Main | Adding wiggle to jigsaw puzzles in AutoCAD using .NET »

After introducing a rudimentary program to help build jigsaw puzzles, we needed to fabricate the design in some way. As mentioned originally, we quickly discarded the idea to 3D print it as too time-consuming and unreliable: we decided to at least investigate using a laser cutter, what I considered to be a more natural choice for this.

Now I did have some experience of using the laser cutter at our local Fab Lab, but as we wanted to iterate quickly – and didn’t have the fixed requirement of the larger cutting bed – we opted to use a slightly smaller laser cutter we bought for the Neuchâtel office last summer. This one uses software called LaserCut 5.3 to drive the cutting or engraving process.

I hadn’t previously used this device, myself, but Nathan Moore, a colleague in our Enterprise Support team, kindly helped with his expertise. And we both ended up learning quite a bit in the process, which I thought was worth sharing in this post. 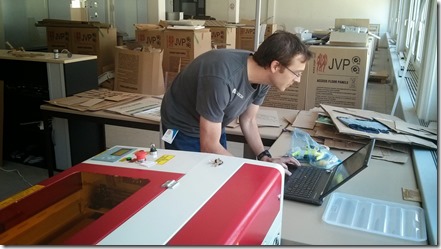 For our first attempt, we decided to cut cardboard. I wasn’t sure what exactly we’d learn from this – other than getting a sense of the size of the puzzle – but we ended up learning something very valuable… cutting order matters.

We were passing the various cutting curves through arbitrarily, so the cuts were made in the order they exist in the drawing (presumably). Which meant that some pieces – and sets of pieces – were being “closed” too soon. And given the nature of the cutting bed – which is basically open, it’s a number of vertical sheets of metal, with gaps between – pieces would just fall when cut completely: 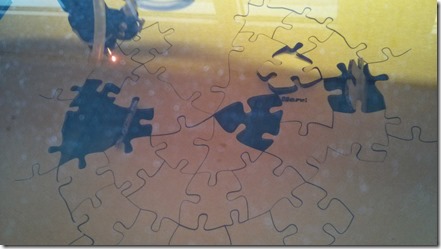 So we needed to influence the cutting order, in some way.

The cutting software supports layers assigned in the DXF files it imports (although these actually need to be assigned unique colours – so strictly speaking it creates its own categorization based on colours) and you can assign them different properties, such as beam power and head speed. But the order of these layers also indicates the order of cutting, which ends up being a very useful attribute.

So we modified the drawing to have one layer for the radial lines, which we would cut first (or at least after any text engraving we wanted to perform), and then differently-coloured layers for the various concentric curves, so they would cut from the centre outwards. This worked really well, although we still suffered a bit when having to reassemble the unmarked pieces into a complete puzzle, at the end. 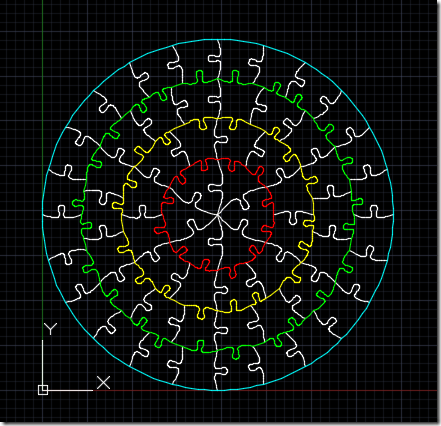 We also played a fair amount with power and speed settings, finding out that speed matters greatly. For 3mm MDF – which we ended up using for the “final” version – we kept the power at 100%, whether engraving text or cutting the board, and varied the speed. We found that anything below 10 (higher being quicker) would result in the board being cut cleanly. A speed of 10 was better than 5 as it resulted in a smaller cut (and a nice, snug fit for the jigsaw pieces). We used a much quicker head speed – 50, I think it was – for any text engraving.

Speaking of text, we had to explode MTEXT into normal TEXT before sending it across (via DXF) into the laser cutting software. The text alignment was definitely inconsistent in the import results vs. inside AutoCAD, so some tweaking based on the way it looks in the software (and then gets printed) ended up being needed. 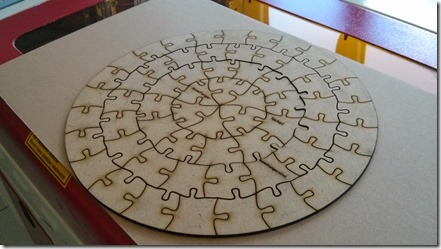 Our next challenge is that we need to work out how to make each of the six segments of the puzzle a different colour. Choices include getting differently coloured MDF boards, painting or applying coloured laminate before the cutting operation, or just staining/painting the output after the fact. But that’s ultimately a detail… the results we have, so far, have been surprisingly good: we know they’ll fulfill the project requirements.

I also think this coding project deserves a bit more time, over the coming months… I may even end up working the puzzle generation into an AutoCAD I/O-powered website and service for one of my AU classes. :-)