I’m excited to announce the newest member of the Autodesk product portfolio, Autodesk SoCap. The term “SoCap” stands for “Software Capture”, in much the same way as ReCap stands for “Reality Capture”. SoCap is a tool that helps you capture existing software behaviour as code, just as ReCap helps you capture a 3D scene as a point cloud.

For SoCap to do its thing, you point it at the piece of software whose behaviour you want to capture – whether desktop software on Windows/Linux/OS X, mobile software targeting iOS/Android* or the URL of a cloud-based app – and SoCap will then create a C++, C# or HTML/JavaScript source project that, once built, will perform much like the original.

[* We expect to support Windows Phone sometime later in the year – probably to coincide with the Windows 10 launch. Also, the exported source project currently targets Visual Studio: at some point we expect to support other IDEs such as Xcode and Android Studio.]

Sounds magical? It actually is pretty amazing. Under the hood, SoCap works by performing dynamic analysis on program modules and by performing a comprehensive suite of automated, runtime UI tests. Graphical output is captured frame by frame, correlated with UI input and then fed into a cloud-based expert system with codified rules built up over decades. (This may sound a little old-fashioned, but then we did start this project over 20 years ago… if it was “born in the cloud” I’d no doubt be talking about our extensive use of machine learning and big data. :-)

The system generates a set of source files that can be used to build your own comparable software product with minimal effort. The resulting source project won’t have 100% of the functionality of the captured software – there’s still some program logic that’s just too obscure to be inferred in this way – but SoCap is a great way to get 90-95% of the way there with modest cost. 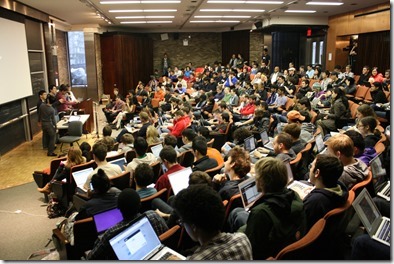 This is a very different product for Autodesk to release in that it relates to the process of software development rather than “real world” design and engineering. The closest comparable product I can remember is Hyperwire, which was developed by our Kinetix division, back in the mid-90s, and allowed you to write Java applets using a visual programming interface.

So why now – what has driven the decision to make this available externally? I liken the move to Facebook open-sourcing tools such as Flow and Torch. People generally don’t understand why Facebook does such things, but it no doubt feels good to them and few people externally are complaining.

It just felt like the right time to donate this capability back to the software development community: for years Autodesk was very much a “fast follower” when it came to technology – taking groundbreaking technology developed by others in the industry and making it available at lower cost… democratizing it – but in recent years we’ve shifted strategic focus on becoming a technology leader. As you will see from our investments in BIM, Reality Computing, 3D printing and cloud-based 3D design tools.

Which means our need for reverse engineering rapid application development tools has reduced, as these days we spend our R&D budget on genuine innovation rather than copying imitating replicating standing on the shoulders of other players in the industry.

But wait – couldn’t this tool be used to imitate Autodesk software tools? Well, yes, it could be used by unscrupulous competitors to develop lower cost alternatives, but we’re confident in our ability to keep ahead of the game. We’re just that arrogant good at what we do. That and the fact we’ve hardcoded the tools not to work when pointed at any software coming from Autodesk.

I’ll be posting a download link to Autodesk SoCap as soon as it’s publicly available – watch this space. In the meantime, do start thinking about the non-Autodesk software tool you’d most like to rip-off take after. Here’s a list of Autodesk’s competitors (according to Yahoo! Finance) to get the creative juices flowing.