The biggest VR announcement of 2015?

After the excitement around Magic Leap and HoloLens, on Friday of this week there’s another big VR-related tech announcement being made. But wait… isn’t CES finished? And Build doesn’t happen for a few more months? That’s right: this one is being made at the New York Toy Fair. Say whaaat? 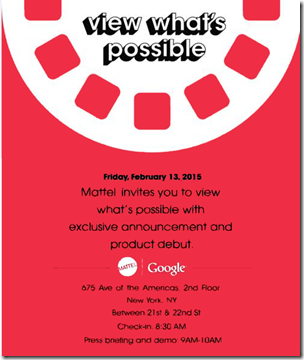 Mattel has owned the View-Master brand since their acquisition of Tyco Toys in 1997 (who had in turn acquired the brand in 1989). I now have probably twenty or so View-Masters – something I talked about recently – but there’s nothing very interesting about the later models, in my opinion. This Model K was made by GAF in the 1970s and is about the coolest of the late-era models: 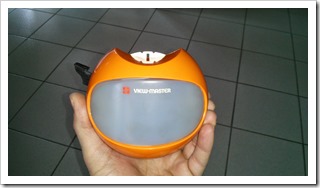 The best models are the ones made of Bakelite. My overall favourite has to be the 1950s Model D, which has really nice adjustable-focus lenses and some real solidity to it: 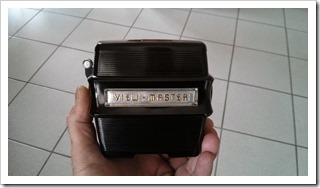 Anyway… I’m really intrigued by the announcement that Google and Mattel are partnering on a product. Here are some thoughts I had when I heard the news:

It has something to do with Google Cardboard.

Sawyer’s View-Master arguably created virtual tourism back in the 1930s, or at the very least democratized it. You could travel the world in 3D from the comfort of your living room. This was a big deal before air travel became widely affordable.

Google Cardboard is democratizing Virtual Reality in a way that no-one anticipated. It seemed like a joke, initially, but people have come to realise that they’re really onto something: you already have all the hardware you need to do VR in your smartphone.

There’s ultimately nothing very interesting about low-cost VR hardware. This has to be a software play.

While it’s possible that this is about some kind of co-branded hardware, that’s been kicked to the curb with Google Cardboard. Yes, there are a bunch of projects to create “better” cardboard headsets – I’ve supported a few of them on Kickstarter (some have been more successful than others) – but that seems like a race to the bottom. I’d be disappointed to find out that’s what this was all about.

If hardware is involved, it should be about capture.

While View-Master technology was primarily about consumption, you could actually capture your own 3D photos using a View-Master Personal Stereo Camera. Some of the most compelling reels in my collection are “personal” ones – in that they were taken by an individual rather than purchased, and are therefore completely unique. 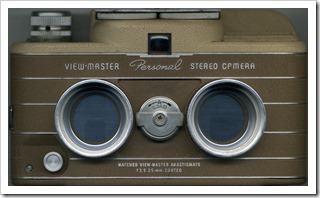 Some years ago I was interested in attempts to bring stereoscopic imagery to digital cameras, such as Loreo’s 3D Lens in a Cap. I didn’t end up getting one, but I certainly liked the concept.

More recently Poppy 3D has taken this further, adapting the beam-splitter approach for iPhone devices. Beam-splitting seems like a tough one to bring to mobile in a way that works consistently well across devices, though, so it remains to be seen whether this is achievable for a device-agnostic technology such as Google Cardboard. The stereo camera apps I’ve tried with Cardboard typically work by letting you take two shots, one for each eye, often with some kind of alignment assistance so you can make sure second image makes the view 3D (and doesn’t make people sick). The experience is generally less-than-compelling.

Even without stereoscopic 3D, you can have fun with VR by sharing panoramic images and even videos. Orbulus is a nice example of an an app enabling viewing of panoramas using Google Cardboard. Gear VR has some panoramic video content that looks great (it’s not truly 3D, it’s just wrapped around so you can look wherever you like).

It’s likely to include video.

I doubt very much that static content – such as has been delivered via View-Master until now – is going to be compelling enough for VR. Whether this comes via 2D photospheres – or even videospheres – or via true 3D videos is another question. View-Master has ultimately always been about the stereo effect, but that’s a hard problem. And viewing 3D video in VR as someone’s view-point shifts constantly is likely to be another road to nausea.

The real opportunity is around community.

To some degree both Poppy 3D and Orbulus are making attempts to drive community-sharing: Poppy 3D’s approach appears to be by leveraging existing social platforms such as Twitter and Flickr – check out the photos on Flickr tagged with #poppy3d, for instance – while Orbulus bundles up “Orbs” created by the photosphere community around the world and packages them in updates to the Android app.

If Google and Mattel can crack this particular nut, I think they’ll be onto something. There could even be some physical component, such as the UK-based creative technology agency, Knit, has prototyped using NFC. Physical postcards (etc.) that connect you with a virtual experience when you put them in your modified Google Cardboard device… a simple idea that’s straightforward to implement, but there could nonetheless be something there.

Whatever it is, count me in.

Being a fan of both View-Masters and Google Cardboard, while I know I might end up being disappointed – based on the above predictions – I can’t see how I’m not going to buy into whatever it is. I feel the same kind of excitement I had when the first LEGO Star Wars hit the stores at the turn of the millennium. And those were good times. :-)

What do you think? Post a comment during the course of the week… I’ll circle back once the news hits on Friday, to see how far off the mark we ended up being.

The first bits of news are rolling in about this device…

It’ll cost $29.99 and is essentially a Google Cardboard-equivalent HMD for an Android phone. There will be a software component – a custom Mattel app – which will detect the application of “experience reels”, presumably via NFC. Which would be pretty much what Knit prototyped (the link to which is further up the page).

It will also run other Cardboard apps, apparently. There isn’t currently support for video, but there are some animations and sound effects.

So no focus on capture or community either, as yet: it’s still a sell-through model monetized primarily via the reels (at $14.99 for 3). Understandable, I suppose, given the more recent (i.e. since the 1970s) history of the brand, when it essentially evolved from being an educational experience into a child’s toy. It will be interesting to see how the existing 3D material Mattel has in their back catalogue translates to the new device. I was never really into the whole “stills from a movie” era, but I’ll do my best to keep an open mind.