I’m down with some kind of stomach bug, so any thoughts I might have had of writing code today are out the window. But luckily there’s plenty of juicy technology news buzzing around – especially in the AR space – that’s worth reporting on. Interestingly this isn’t the first time this has happened. I wonder if my sickness-addled brain has a tendency to gravitate towards “out there” technologies such as AR & VR (especially since reading John C. Wright’s The Golden Age trilogy – a must for anyone interested in this domain)?

I spent a fair amount of time working with VR, this week: I took the web-based VR samples and created a native wrapper for the Samsung Gear VR, and yesterday I decided that Google Cardboard deserved similar treatment, so I went and created a simple Android app using the Google Cardboard SDK and much of the same code. More on that next week.

I believe the immersive experience of VR is going to be really important for the entertainment industry and some limited use-cases for design professionals, such as walk- and fly-throughs of a purely virtual space (perhaps in the context of digital cities). It’ll also be useful for other kinds of design review that aren’t anchored to the real world. Of course it could also be the pre-cursor to us all living in shoeboxes, only interacting inside virtualities, but I’m not ready to go there just yet. :-)

In my opinion the “big ticket” item for our industry in the coming years – assuming various tricky problems get solved – is going to be AR. And interesting details on a couple of promising technologies in this space have emerged over the last few days.

The first is from Magic Leap, a secretive start-up that has recently received upwards of half a billion dollars in venture capital from the likes of Google. Oh, and they’ve recently appointed another sci-fi (although a lot of his work is termed as speculative rather science fiction) hero of mine as their Chief Futurist: Neal Stephenson, the author of the incredibly prescient novel Snow Crash.

More details regarding the Magic Leap technology have been inferred by the tech press from a recent 180-page patent filing. Inevitably, most of their focus is on entertainment, i.e. the living room:

But lip-service is at least paid to professional activities, which will now be possible in both the office and the living room. ;-)

Perhaps surprisingly – although perhaps not, if you happen to believe that Nadella’s Microsoft has turned a corner for whatever reason – the Magic Leap excitement was displaced very quickly on the AR front pages by the Windows 10 (and related) announcements. Yes, Windows 10 will be a free upgrade, and Microsoft is marketing Surface Hub as a huge, interactive workspace (which I have no doubt will be very cool, especially for people who have to collaborate with teams in other sites, as I do), but the main bit of news from the recent announcement was another AR-related technology, Microsoft HoloLens.

So far this looks very, very impressive. I know it’s a marketing video, but this just blows me away:

This video provides some additional, helpful context, in case:

When looking into into the announcement – and I fully admit that I haven’t yet found time to sit through the 2+ hour recorded webcast – I came across this photo in an article: 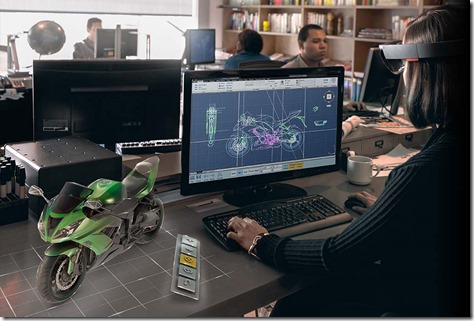 I do believe that’s AutoCAD! :-) Now this isn’t a frame from the launch video, so I can only assume they decided to create a more direct link between the modeling environment and the hologram, showing it in 3D in both places. But nonetheless it’s indicative of the way people are thinking about this technology: it definitely has widespread implications for the design industry.

Now I’m not privy to any strategic discussions between Autodesk and Microsoft about HoloLens, but I’m certainly excited about the potential. Windows 10 will apparently ship with HoloLens APIs and capabilities… there’s even been some mention of Oculus and Magic Leap being two possible devices that might be hooked into the underlying Windows Holographic infrastructure.

I’d be very curious to see what can be done with this technology, and also how the battle for AR-mindshare plays out from here.