« Creating a stereoscopic viewer for Google Cardboard using the Autodesk 360 viewer Part 3 | Main | A dashboard... but what for? »

It’s been a busy few days. After being in full-day meetings on Thursday and Friday, I headed down with Jim Quanci to the VR Hackathon’s kick-off event on Friday night. It was held at the newly refurbished Gray Area Theater in San Francisco’s Mission district.

The Friday night “mega meetup” was a great way to kick the event off, with presentations from NASA’s JPL on how they teamed up with Sony to develop a prototype VR system to control robots for asteroid mining. 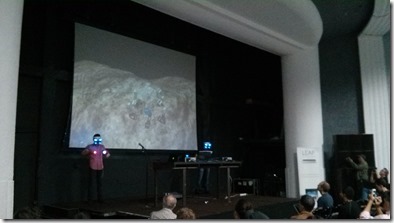 There was also an interesting presentation on the evolution of VR tech from Leap Motion’s founder and CTO, David Holz. 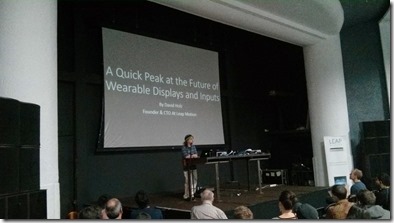 Jim and I set up a table – as Autodesk sponsored the event – and over the course of the weekend talked to various people about the Autodesk Viewing & Data API (and about our products and APIs, in general). To help demo the stereoscopic viewer – and to attract people to ask us to check it out – I had some fun putting together a version that auto-orbits and explodes the contents (once fully loaded). This version is best viewed in a browser, of course, as it doesn’t respond to device tilt. I wasn’t sure whether I’d end up participating in a team, or not, but I ended up having so much fun hanging out with Jim and chatting to people that I stuck with that. 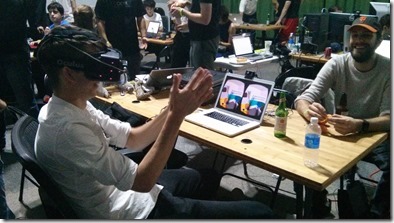 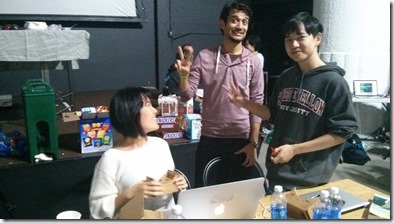 There were even a few Autodeskers present. Lars Schneider – a member of the Infraworks team in Potsdam, Germany – formed a team with Torsten Becker, a friend of his who was also visiting SF. They’re pictured here with Michael Beale, who has worked on our web-based viewing technology and is currently on the rendering-as-a-service team. 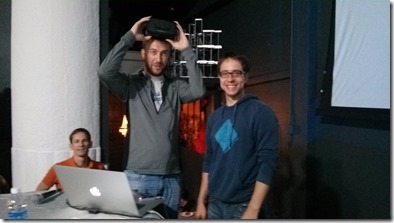 Aside from answering questions and giving demos, I also spent some time checking out the other sponsor’s technology. Sony’s asteroid mining tech was neat: 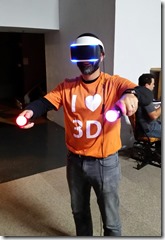 As was the combination of Leap Motion with Oculus Rift: 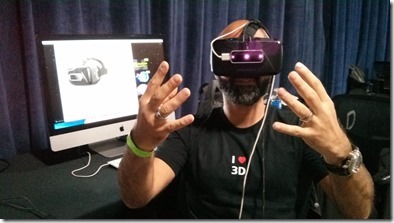 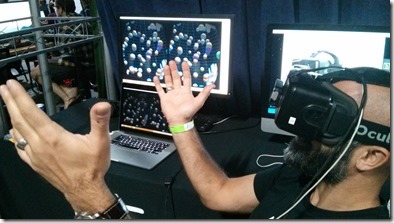 Aside from seeing Leap Motion with Oculus Rift, at least one team was using an alpha version of the Android SDK to provide input into a Google Cardboard-based game. Something I intend to do myself, once I manage to get a phone that supports the SDK. 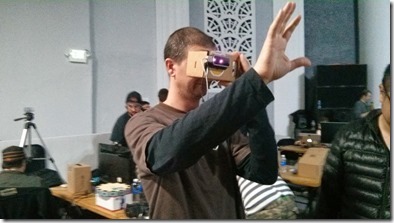 Sunday afternoon was all about judging. A number of the more tethered solutions were judged by a roving panel of expert judges… 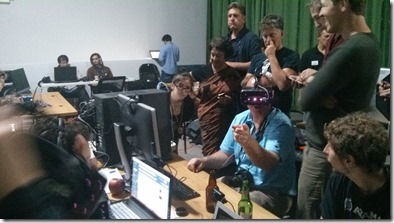 … but several others ended up being presented on the main stage. Here’s a section of a video of Lars & Torsten’s Oculus Rift + Leap Motion app that I’m very happy to say ended up winning the WebVR category.

(Lars tells me they’ll be posting the code soon – I’ll be sure to link to it here.)

Way to go, guys – makes me feel good to see a fellow Autodesker doing so well at this event. :-)

Overall it was a great weekend. There were some really cool projects – such as a Leap Motion-based hand tremor detector, a procedurally-generated game world (which reminded me of Elite) and a CAD-like tool that allows you to tweak the design of a lamp shade by tweaking the position of shadows on the wall. Awesome stuff.

Many thanks to Damon Hernandez and members of the Web 3D consortium for all the hard work. I hope I’ll be able to make it across to the next event!