I was very happy to read the news on Shaan’s blog: 123D Catch is now available on Android. I blogged about its availability via the web and on iOS, a couple of years ago, but there’s now an Android version and it’s pretty slick. 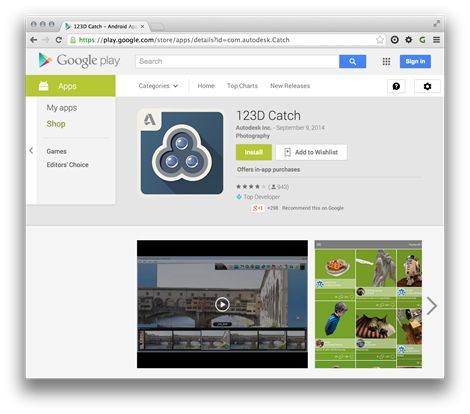 Some quick background info: I do my best to stay OS agnostic, as a rule. My primary desktop OS is Windows (7 or 8.1, depending) but I also use OS X Mavericks and play with a few different Linux distributions when I get time. I have an old iPad 2 that has a cracked – but still functional – screen and use a Nexus 4 phone currently running Android 4.4.4 (as you can see, I tend not to follow the expected 2-year mobile refresh cycle, if I can avoid it… there are too many other fun gadgets to spend money on :-).

While living like this (embracing tech pluralism) causes some degree of pain – things don’t “just work” a lot of the time – it feels good to surf the waves caused by the ebb and flow of the tech industry. And, anyway, I hate the view from walled gardens – I want to see the horizon! ;-)

So yes, the main device I walk around with, these days, runs Android and has been waiting patiently for 123D Catch to show up on Google Play.

I started by creating a project and using the app to take snaps of a stone tea-light holder I received for my 30th birthday (I think it was, anyway). 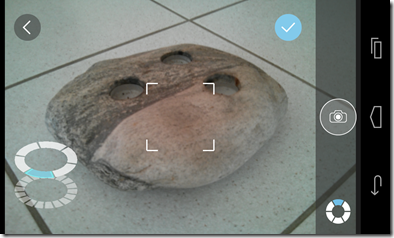 Then I went ahead and uploaded the project for processing:

Once completed, I followed the prompts to review the 3D model and then frame it for publication.

The results were decent, although I did miss a bit of photo coverage on the back of the candle, leading to a couple of small holes. Nothing that couldn’t be fixed using meshmixer, Project Memento or the 123D cleanup tool, though.


If you have an Android device, take the new app for a spin and see what you think!