Top 5 beaches on the island of Andros

As mentioned in the last post, we recently got back from our first trip to the beautiful Greek island of Andros. While we managed to visit 8 beaches during our 12 days on the island – some multiple times – there are more to see: the list is far from exhaustive.

I’ve done my best to state my (admittedly subjective) criteria, in case you’re looking for something different from a beach holiday. I’ve rated the various beaches in 5 different areas:

I’ve given a heavier weighting (3x) to the last two, as that’s what I’ve found I valued most highly (i.e. when I summed it all up it gave me the order that felt right).

So without further ado, the winners are… 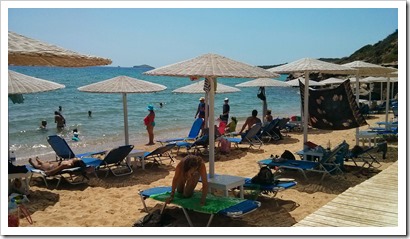 One of the last beaches we visited, this one really impressed us (especially the Hotel Perrakis beach bar – excellent service & great mojitos! – and the windsurf/kayak rental). Not the prettiest location, but then it has stiff competition.

It narrowly beat the neighbouring Gold Beach onto this list, which lost out in terms of facilities and having a less laid-back (i.e. more twentysomething) vibe.

Achla beach is one of the top-rated attractions on Andros, according to TripAdvisor. Some rate it as the best beach on Andros, in Greece or even the world. It’s seriously that beautiful.

But unless you have your own boat, it’s a disaster: the last 8km of access road is worse than unpaved, it’s basically off-roading along a scary ridge that seems to go on forever. (Driving up and out is easier, as you have much more control.)

Any beach is going to look amazing after that drive. The fresh peach daiquiris at the beach bar also helped calm some nerves in our party. 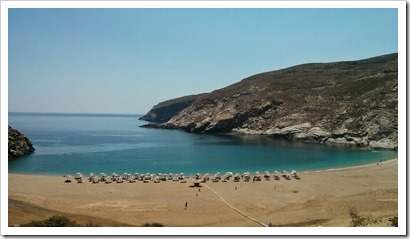 This was a fantastic beach, with a much more tolerable access road. Yes, it was still dirt, but it really wasn’t so bad when compared with Achla. The restaurant was very good (even slightly cheaper than elsewhere) and having beach umbrellas at the end of the drive in was a nice bonus. (The price across Andros is a fairly uniform €3 per sunbed – in a few places with competition – such as Kypri and Agios Petros beach – you might find them at €2.50 or get a free bottle of water thrown in.) 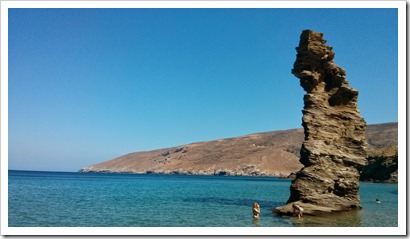 Another Andros landmark, Grias to Pidima means (I believe) “The Old Lady’s Leap” and is named after the natural formation of an old lady just off the beach. Yes, you do have to squint and use your imagination, but it’s still pretty cool.

You have a bit of a drive up from Ormos, on Korthi bay, and then a modest ~10 minute hike along the top of a small cliff (which is a bit scary at first with a 5 year-old in flip flops) until you get down to the beach. But it’s find once you know the path.

We only stopped by at the end of the afternoon, so didn’t really experience the full day there. But it was a great few hours, nonetheless. 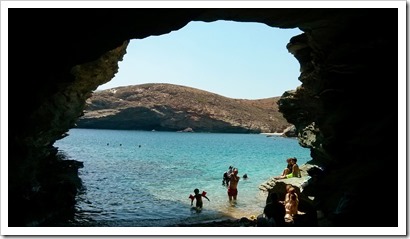 This was hands-down our favourite beach on the island. When we arrived there on the first full day on Andros – by a dirt road but nothing bad when compared with Achla and even Zorkos – friends led us to a cave on the far left of the beach where we camped out in the shade as the older kids (and braver adults) jumped off rocks into the sea. Incredible. 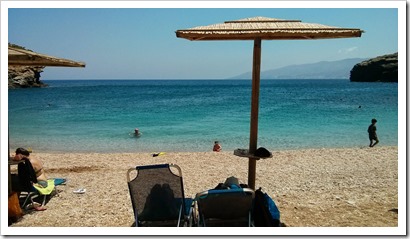 The second time we went there just as a family and did the sunbed and umbrella thing. Our umbrella was right on the beach and our kids had a blast playing in the waves with the late-afternoon sun glowing on their faces (this one was east-facing).

If I had to visit a beach every day for a month, this would be it, and that’s really saying a lot.