My friends in the Autodesk Developer Network team asked me to get involved with creating a sample for the API we’re planning to launch soon for the new Autodesk 360 viewer. They were quite specific about the requirements, which was very helpful: something fun, perhaps with a steampunk theme, that shows some interesting possibilities around both the HTML5 container and the embedded viewer. I was also suggested the Morgan 3 Wheeler as a possible model to look into hosting, so I really didn’t need to be asked twice. ;-)

I started by tracking down a model: I ended up using the Inventor files posted for the Morgan advertisement competition towards the end of last year. The posted archive actually has the originating Alias model inside the ZIP, it turns out, so I went ahead and imported that into Fusion 360.

The model is huge, so this has been a real test of the technology, and Fusion 360 has mostly been up to the challenge. I’m new to Fusion, but the experience has been positive – I’ve had to learn quite a bit as I’ve gone along, but the UI has been intuitive enough. Although I’m really only applying materials to geometry, so nothing very challenging from a hardcore modelling perspective.

Here are a few shots of the model. I really need a “grimy” visual style to go for the full-on steampunk feel, but overall I like the results, so far.

Let’s start with a view of the front: 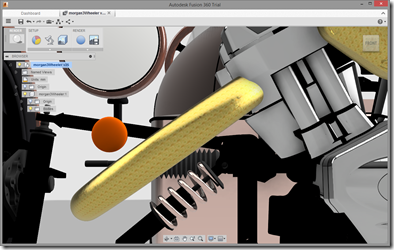 Here’s an animation of a few images taken at different stages of applying a material to a set of components. Yes, I know that copper is a really poor choice for a suspension spring – just as brass is less than ideal for an exhaust pipe – but this is all about the look, not at all about the eventual presumed performance. :-) 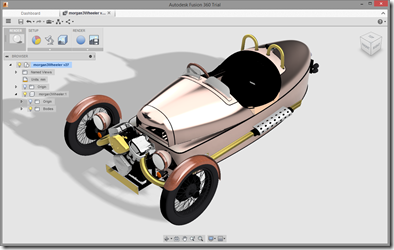 … as well as one in the Autodesk 360 viewer, although not all the materials appear with full fidelity (and the generic material currently comes through as red, whereas I haven’t started working on the interior, as yet): 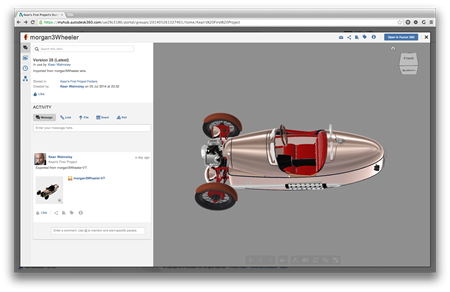 Oh, and the RaaS (Rendering as a Service images) look really beautiful, in case you’re wondering about that: 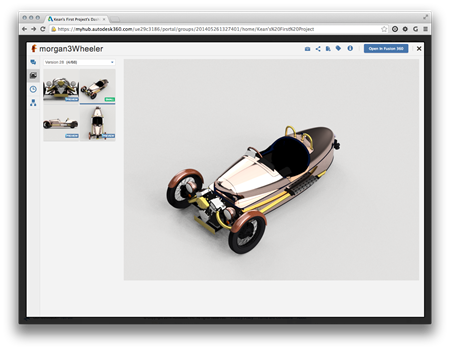 Right now I need to work on uploading the model to data service and embedding the viewer into a fun steampunk-themed HTML page I found on the web… I’ll post more about that, in due course.