Christer Janson, Maker of the Day

My good friend and colleague, Christer Janson, was named 123D’s Maker of the Day a couple of weeks ago. This post is to congratulate Christer but also to talk about Christer’s background at Autodesk and the key role he plays in the AutoCAD team. 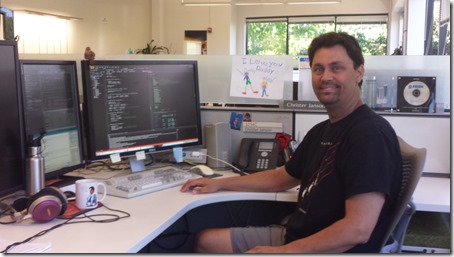 I met Christer during the second round interview for my first job at Autodesk, back in 1995. I’d flown across to Switzerland for the interview, although the job itself was to be in the UK: it was a couple more years before I managed to move to Neuchatel for the first time.

Back then Christer was a senior member of the European Developer Support team – the team I was hoping to join – and so was understandably one of the people who interviewed me. We got on right away – Christer’s very easygoing, and I dare say the fact we both had ponytails didn’t hurt – and a few months later we were both working on the same team, albeit from different locations.

I’ve really enjoyed working with Christer, over the years: he has a great sense of humour and is the geekiest practical joker I know. I remember he’d written an extremely efficient visual grepping tool (back before the days of Visual Studio’s “find in files” or Windows search) that everyone in the team relied upon heavily. What Christer hadn’t told anyone is that he’d deliberately crippled it to work more slowly on one particular system, that belonging to a colleague of ours. This colleague only found out by chance when he happened to grep his entire hard-drive for his machine name and found it embedded in Christer’s executable. (To his great credit he found it all very funny and reciprocated in kind, of course. :-)

We were probably in the same team only for about 18 months before Christer left Switzerland to work on the 3ds Max team in San Francisco. A few years later I headed across to live in the Bay Area, myself.

We ended up spending quite a lot of time together during my time there from 2000-2003: my wife (my girlfriend, back then) and I used to head over for some great sushi + triple-bill movie nights at Christer’s place – Christer has always had the latest & greatest audio-visual technology, whether that happened to be LaserDisc players, enormous widescreen CRT TVs, home cinema projection systems or speakers you needed a forklift to move – which were always a blast. I remember watching the Alien Trilogy in one sitting, as well as an awesome John Hughes night. We’d brainstormed a long list of future possible triple-bills, my favourite of which would probably have been “3 movies with Mel Gibson being patriotic about someone else’s country”.

Fast forward a decade or so, and Christer and I are both back working on the same team. My focus (aside from my outward-facing activities such as this blog) is mainly on the AutoCAD-based verticals, while Christer is the Senior Software Architect focusing on AutoCAD’s graphics system.

Christer actually has a very long history with AutoCAD – for instance, he implemented the educational plot stamp in the German version of AutoCAD, way back when, although you mustn’t hold that against him ;-) – and the experience he gained when working on the 3ds Max team and creating products such as Autodesk Impression is extremely valuable to the AutoCAD organisation.

Not long after Christer rejoined the AutoCAD team, for instance, he prototyped the first point cloud feature in core AutoCAD – inventing the PCG format in the process – which has in many ways been the springboard for the integration of reality capture technology into our products (the acquisition of Alice Labs has since played a big part in this, of course).

While Christer isn’t really at liberty to talk about what’s coming next from a product perspective, I did ask him a few questions about his work on AutoCAD. My words are in bold, below.

What do you like most about working on AutoCAD?

I love working on AutoCAD – first of all AutoCAD is awesome! It is my main go-to program for most things – my own digital napkin if you will. Whatever it is you want to do, doing it with AutoCAD just feels right. Of course it has its flaws but I’m working on fixing those right now.

Then, of course it is used everywhere! Anything we do has a big impact on so many people and whole industries from third party developers to end users and beyond. It can be a little bit scary sometimes, but it’s a big kick seeing a new release go into the public.

Another thing I love about working here is, of course, the people. I’m working with some of the smartest people I know, and it’s really fun and rewarding to be in such a cool team.

What are some of the challenges?

The main challenge with AutoCAD is, of course, that since it is so big and has such a legacy, you risk interfering with something whatever you touch. As soon as you change some behavior slightly there’s a lot of users’, developers’ and internal code that depends on things working just the way they did. I guess that’s just the nature of changing something you love – I learned AutoCAD with Release 10 and there are times I wish I could just hide everything and bring back the screen menu, but then you see a picture of what it actually looked like back then and you think, ‘umm... we’ve come a long way’.

Where do you spend most of your time?

In recent years I have been involved with Reality Capture and graphics efforts. In the Software Architects team we try to look forward and do research that would be difficult to do on a normal development schedule. Point clouds were an example of something started by a very small team that then let it incubate and mature with the market. Now, some years later, Reality Computing gets all the buzz, and we have state of the art solutions.

Graphics and hardware utilization is also something I’m interested in and we are constantly working on improving.

If you weren’t working at Autodesk, what could you see yourself doing?

If I didn’t work at Autodesk… I don’t know? I would probably be working on software design somewhere else. Early on I was heavily into computer graphics, so perhaps something in gaming? If not software then something equally creative I think. Perhaps a musician, author, or electronics design. Professional LEGO builder would be awesome too!

Another area of personal interest to me is the recent developments in manufacturing and prototyping with 3D printers and CNC machines becoming accessible to a mass market. These tools are becoming available to everyone and I’m trying to educate myself on these technologies, and spend time in our workshop where we have access to a variety of machines to experiment and see how our design tools can help the process.

To finish the Chrutil Sequencer you made use of our facilities at Pier 9. What machines/systems are you certified on there? Anything really scary or impressive?

The Sequencer has been a blast (still is!). I started thinking of building this over a year ago and by late last year I had a prototype up and running where I designed the circuitry in AutoCAD and wired it up on breadboard. The last few months I’ve been building it ‘for real’ and I used 123D Circuits to redraw the schematics, laying out the PCB’s and sending them off for fabrication.

The front panel was designed in AutoCAD and then etched using an Epilog Laser engraver at our Pier 9 workshop. It looks absolutely great! Unfortunately I’m not certified to do metal cutting with our laser cutters yet so for the 130+ holes of various diameters I spent several nights in my basement with a drill press. I hope to be able to use the laser cutter for the next version because that was kind of tedious…

If you are willing to sit through my shoddy camera phone work here’s a little video demo I made as soon as I got the sequencer up and running:


The workshop we have at Pier 9 in San Francisco is just the best. So far I’m certified on the Objet 3D printers, the ShopBot CNC router, and both the Epilog Legend and Coherent MetaBeam laser cutters. The Metabeam laser cutter is a beast! It’s a big scary machine with a 400W laser! There is something special about having a powerful metal cutting laser beam at your command, and after you go through the startup sequence and load your stuff, there’s that moment as you press ‘Go’ you’re thinking “Woah, one slipup and I’m burning through the earth’s crust”. Luckily I haven’t caused any China Syndromes yet though.