I’ve been a fan of TED for many years (and am very happy to be working for a company that has sponsored such an important conference). Yesterday was the first time, though, that I actually had the chance to attend a TED (or in this case, TEDx) event in person. 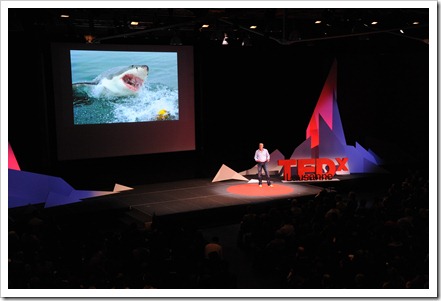 TEDxLausanne was held at the University of Lausanne, about an hour from my home. It was held in English, which isn’t a requirement for TEDx but seems a good choice for a multi-lingual country such as Switzerland.

The agenda contained an interesting mix of sessions: there were (of course) a number of live talks but also a couple of performances and some pre-recorded TED videos (this one is a requirement for TEDx events, it seems).

I managed to get a seat in the second row, which also meant I didn’t live-tweet the event (something that doesn’t look good on videos – they ask you not to if you’re near the front). The picture on the right shows where I was seated: I needed to enhance the image to work this out. :-)

Overall I found the event to be excellent: the organisation was first-rate and the presenters were interesting and well-rehearsed. There were sessions on wide-ranging topics such as environmental eating, gamification, sign language for musical performances, moving beyond fear, your sense of smell, therapy for stroke victims and effecting change.

There were a number of exhibitors at the event, too: I spent some time talking to Henk Mulder of Genetic Fractals who’s working on what seems to be some very interesting technology. There were moderated round-table discussions on topics such as sustainability, healthcare and entrepreneurship.

It was a great day. The only possible criticism I might have is that a small minority of the presenters seemed to be promoting their own products or services a little too blatantly, for my taste: while I certainly respect entrepreneurs’ need to build their businesses, TED isn’t about that (it’s even listed as a no-no in the rules). But this was a minor point, and I’m probably being unnecessarily sensitive about it.

I’d certainly recommend attending a TEDx session near you – I look forward to going back to TEDxLausanne in 2015, myself. The online TED experience is unsurpassed, but getting to meet the presenters and interact with exhibitors and other members of the audience certainly changes the experience.