Yesterday I was reminded that 200 sessions from Autodesk University 2013 were recorded and have been made available on-demand – for free! Many great classes are available as well as the keynote and innovation forum sessions. I believe you need to create a free Autodesk account to view them, if you don’t already happen to have one.

In fact, here’s a screengrab from the closing keynote which happens to include a photo (taken by Shaan Hurley, of course) of me with Scott McFarlane (love the sweatshirt :-) and Owen Wengerd at the Blogger’s Social. 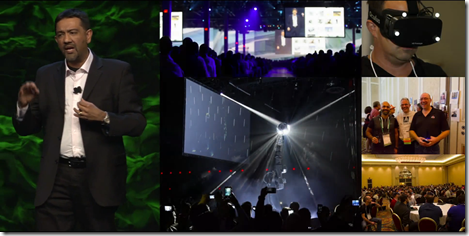 I did a quick search for sessions that I’ve been involved in, and it turns out quite a few have been recorded and posted.

A number of the panel sessions I participated in were recorded as well as my two main sessions from AU 2013. Here’s the one that was recorded as part of AU Online LIVE, and so has video feed, too (entitled Reality Capture Inside AutoCAD Using Kinect® Fusion):


Otherwise my other primary session was also recorded – Integrating Leap Motion with AutoCAD – but I almost wish it hadn’t been: the session was very nearly a spectacular failure, even if it ended well enough.

[In case you have no interest in hearing about the technology-related challenges I hit during my sessions at AU2013, please stop reading now. The rest of this post consists of me getting these off my chest. :-)]

I’d been doing a final test of the material in the Speaker Ready Room – with the Leap Motion device working perfectly – before heading across to the room in which the session was being held. I woke my system from hibernation but it suddenly didn’t see the Leap Motion device. I tried all sorts of things to make it work, but ended up literally running back to the Speaker Ready Room, as I’d seen someone in there using a Leap Motion controller of their own (which they very kindly then lent to me).

As using a different device didn’t help, I ended up rebooting the system, but that just took forever. I had my slides on a thumbdrive and so managed to present a few of them using the room’s standard system while my PC was coming up. In the end it all worked (phew), but it was more than a little stressful. I don’t think I’ll end up watching the recording – I have no desire to re-live the trauma – so please let me know if you happen to and it comes across OK. :-)

In fact this wasn’t my only attack of demoitis during AU 2013. The following day – when I presented the live-streamed Kinect session – my system very nearly didn’t boot at all. I was thankfully in the room an hour early – at 7am – but my PC didn’t start as it had been suffering from a firmware incompatibility (I now know this, finally) with an update that was made to Windows 8.1: because I have TPM enabled – my system contains sensitive information so it’s a corporate requirement to use BitLocker – it sometimes had trouble waking from hibernation. I very often had to perform a convoluted series of actions – including attempting a network boot and then entering my 48-character BitLocker recovery key (which I think I now very nearly have memorised) multiple times – in order to get the system up and running.

It took about 15 minutes to resolve (I’ve since updated my system’s firmware, so hopefully that’s now all in the past), after which I could relax and listen to the tunes the sound guy used to test the audio system (Dire Straits’ Brothers in Arms – I couldn’t actually have chosen better myself, on reflection) and calm down ahead of the live broadcast.

Again, the session itself seemed to go fine, but I can’t help feeling that the accumulated stress contributed to the fever I came down with on the last day of AU (which kept me in bed for most of the following week – the worst I’ve been hit in years).

Anyway, that’s the last of my anecdotes related to the most recent AU. I suppose the moral of this story is never to work with children or animals or present sessions requiring complex computer peripherals. ;-)