« Moving text in an AutoCAD block using .NET Part 2 | Main | Computer Science Education Week kicks off in the US »

I’m sitting in Heathrow Terminal 5, waiting for my connecting flight to Geneva. A good time to reflect back on another intense week at Autodesk University.

I arrived in Las Vegas for this year’s AU last Saturday evening, flying via the UK on a flight that seemed full with AU attendees (even if Autodesk employees were limited to 20 per flight). Among others I bumped into Tilo Pfliegner from kubit and the CAD Professor himself, Sunith Babu.

I’ve really found that having the extra day in Las Vegas – which I usually spend shopping for the family and hanging out with colleagues – is a necessity: arriving on Sunday evening is just too physically demanding.

As usual, my AU kicked off on Monday with the ADN pre-conference. As I now work for the AutoCAD team, I find it’s increasingly valuable for me to attend this event: it really does give excellent information on what’s coming from Autodesk, technology-wise. I’ll of course share relevant announcements via this blog as soon as they can be discussed publicly.

This year there was a really interesting pre-conference called CAVE. Among the keynote presenters were two heroes of mine, Neil Gaiman and John Cleese. I managed to sneak in to see Neil talk: his very interesting talk drew from this recent lecture, and I even managed to get a photo taken with him: 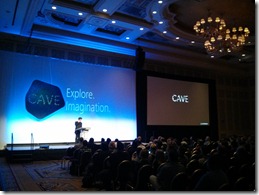 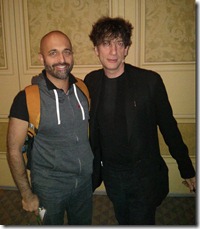 After the ADN session was the APPHACK 2.0 event, at which I was honoured to be among the judges. There were 5 finalists to evaluate: this year’s competition had some really interesting entrants and the winner, WeoGeo, was very deserving of the top prize.

Right after this was the usual ADN party at El Segundo Sol: a great chance to catch up with developers. I stayed there for some time before heading on to the Speaker Social in TAO and then Shaan’s Blogger Social.

The first day of AU proper started with the mainstage keynote, which started with an introduction from Penn & Teller followed by presentations from Jeff Kowalski and Carl Bass. 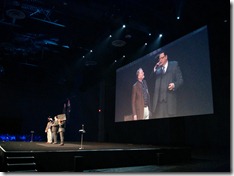 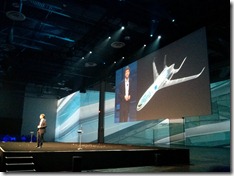 I then had the chance to have lunch before being part of the “Meet the Experts” panel for the AutoCAD API (always a fun session).

A short break before my first session as primary speaker: one on integrating Leap Motion with AutoCAD. Very frustratingly my PC decided not to see the Leap Motion device – even though 5 minutes before I’d tested it in the Speaker Ready Room – but I eventually managed to get it working by rebooting. Otherwise the session went fairly well.

In the evening I attended a “mixer” will colleagues at SushiSamba, but did my best to get an early(ish) night in advance of my heaviest day at this year’s AU,

This was a big day: it started with my AU Online Live session on integrating Kinect Fusion with AutoCAD, bright and early at 8am. Stephen Preston helped moderate this session which was probably the highlight of my AU, this year. You can find the recording of the session here. Before I left Las Vegas, the event organisers told me it has so far been watched by 1,000 people. Wow.

I then headed off to co-present a related session entitled “From Table to Tablet and Back Again: The Evolution of the Designer's Toolset” with members of the AutoCAD Product Management team. I presented a 15 minute segment showing Kinect, Leap Motion and SensorTag.

Next was a 2-hour stint at the Autodesk 360 lounge where I manned a booth showing AutoCAD 360. This was quite fun, but also took quite a bit of energy.

My last session of AU 2013 was again to be a “Meet the Experts” panelist for a session focused on Cloud & Mobile APIs.

In the evening I met up with some old timers for a few drinks, now that my various sessions were complete for this year’s AU.

In a sense Thursday was “free”, in that I’d finished up my sessions the afternoon before. I really just had to check out and wait around for my 8pm flight.

Unfortunately I woke up with a fever: the average of 4-5 hours of sleep over 5 nights – as well as the stress of the event itself – had obviously impacted my defenses. And the temperature in the conference centre – and the city itself, it dropped by a huge amount during the days I was there – won’t have helped, either.

I spent a little time in the exhibit hall before attending the closing keynote with Amar Hanspal – once again with Penn & Teller – before heading to the airport. 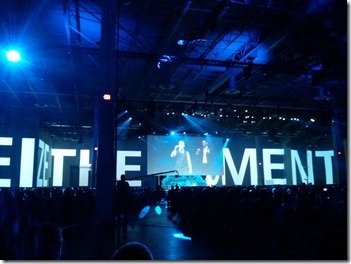 The journey home has been pretty miserable, unfortunately. I’ve loaded up on cough sweets and pain medication at the Boots in Heathrow, but at this stage I really just need to be tucked up in bed. I always come home from AU feeling exhausted but energised from having interacted with so many passionate users of our software. The feeling of exhaustion is stronger than usual, though, this year.