To celebrate this year’s Halloween, we went along to Instructables (like several million other people – this is the site’s big ticket event of the year, apparently) and found a really fun project to make, Halloween chocolate skulls.

Living in Switzerland is great, but sometimes I miss the ready availability of various products that we enjoyed when living in the US. Getting started was easy enough: we managed to get Fimo very easily from the local shops (it’s a European product, after all), and – with the help of a YouTube video and a few pictures – I used that to fashion a tolerable-looking skull.

Certainly not as good as the original project, but pretty stunning considering my meagre artistic ability (especially when it comes to the plastic arts).

The next challenge was to use this prototype to build a food-safe mold. That’s where things got tricky: the really interesting liquid RTV silicones just don’t seem to be available. You can get them across the border in Germany pretty easily, but as soon as you want something shipped to Switzerland the price skyrockets. I even looked into making your own, but they generally don’t seem to be food-safe (and that really isn’t something I’m prepared to take a chance on). In the end I managed to find a product called SILLI that was shipped in at a very reasonable price from the Netherlands. 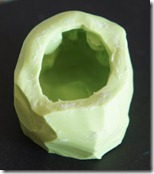 While this silicone is also created by mixing two separate parts, unlike the one used on Instructables the mixture isn’t pourable, which meant that in some ways it was easier to work with – for instance I didn’t need to build a frame to pour the liquid into – but it was also less flexible. In the end it worked well, once I’d carved away at the resulting mould to make it thin enough in certain places, making it easier to pop the solidified chocolates out without them getting damaged. The finished mould reminds me of Kryten from Red Dwarf, for those who know the show. 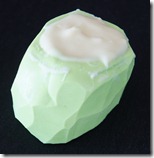 To make things a bit simpler – and a chocolate is not something that’s hard to come by in Switzerland ;-) - I’ve filled the mould completely with melted Galak (Milkybars are on me!) to make each skull. It only takes about a half-hour for each skull to set, and I can get three skulls from each 100g bar. Production is now cranking them out in time for our annual Halloween Party at the weekend. 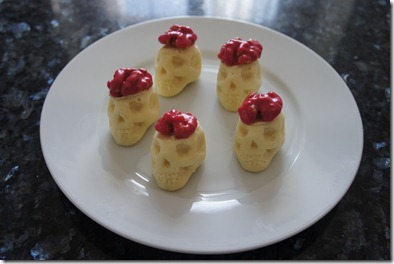 I could probably cut away a bit more at the chocolate to make the brains look like they’re really inside the skulls, but still – I’m pretty happy with how they’ve turned out.