I had a little fun with the title for this post: unfortunately this one isn’t a “how to” and I’m not actually going to provide a code sample. But I did want to highlight how AutoCAD’s .NET API has been used for at least one exhibit at this year’s Burning Man, and a very cool one, at that.

I first heard about Burning Man when I was living in the San Francisco Bay Area back at (or soon after) the turn of the millennium. Our housemate back then (being British I have trouble with the term roommate… back in the UK that actually means you share a room) was a regular at the event, and I was close to going along a few times.

For those of you who aren’t familiar with it, Burning Man is basically an enormous, outdoor, curated art gallery that gets set up in – and then completely eradicated from – the Black Rock Desert, once a year.

Employees from Autodesk have always participated in the Burning Man event but for the last few years a team from our Office of the CTO has attended in a quasi-official capacity – which I’d prefer to take as a sign that as a company we’re engaging with that community more actively, rather than the event is becoming more corporate – so perhaps I’ll find a way to sign up and make it across, at some point. We’ll see.

Janet Go, a member of AutoCAD’s user experience team, put me in touch with one of her friends who made heavy use of AutoCAD’s .NET API to help build a sculpture for this year’s Burning Man. The friend’s name is Kevin MacDonald, a Seattle-based software developer who started his career as a machinist. He currently works as CTO for TeachTown, a company that creates educational software for children with special needs and autism.

Kevin has maintained his interest in metalwork, over the years – in fact, he’s been an AutoCAD user in one capacity or another for nearly 30 years – and so for his 9th year at Burning Man he decided to take a metalwork project there for the first time. For previous public art projects in the Seattle area, Kevin has successfully driven a plasma cutter using designs he’s worked on inside AutoCAD, so it was on this basis that he approached the Burning Man project.

For Burning Man Kevin wanted to create something with a different level of complexity, though: he wanted to generate a number of Penrose tilings computationally – with some random variations, of course – and then use his favourite as the basis for the centerpiece of a giant spider’s web what would be cut from a metal sheet. Kevin would still drive the plasma cutter using CNC based on his AutoCAD model, but he decided to use the API for the “computational geometry” piece.

Here’s the finished sculpture, where you can very clearly see the kind of pattern Kevin was looking for: 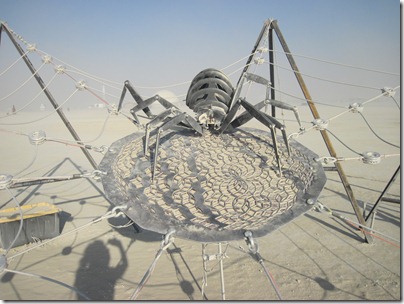 To create the design for the centerpiece, Kevin created a fairly complex .NET module that generates a sequence of random tilings: 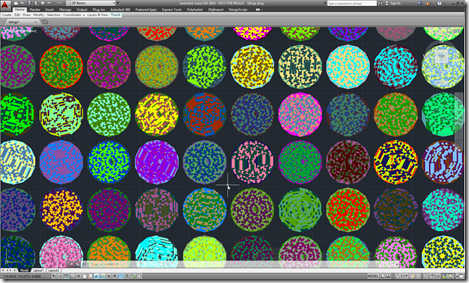 Each of these tilings has its output saved to a simple JSON file on disk, which makes it really easy to generate one again or to use its settings as a basis for further exploration.

The code is capable of generating really elaborate results: 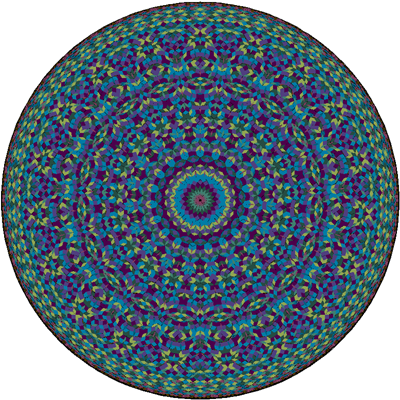 The generated tilings are basically collections of rhombi, which were then output to DXF to drive the 4x8 foot plasma cutter via CNC. Kevin was able to generate the results he wanted using only a single plate, although he did have to watch out for warping (to make sure the plate didn’t become taco-shaped as the metal heated up and sections were removed).

Aside from using it to design the central plate, Kevin also used AutoCAD to design the connector pieces in the outer part of the web, which he then machined using a lathe.

Getting the 1000lbs of steelwork to the middle of the desert was only a modest challenge: the 30-strong camp that Kevin belonged to took a couple of trucks to carry this and other artwork they then assembled on site (a major part of the Burning Man experience, by all accounts). 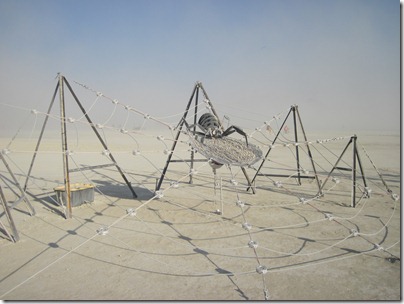 A really nice feature is that the web was also interactive: the AutoCAD-designed connectors contained pressure sensors that activated LED tubes along the strands of the web, reacting to where you were on it. At night it must have been simply spectacular… 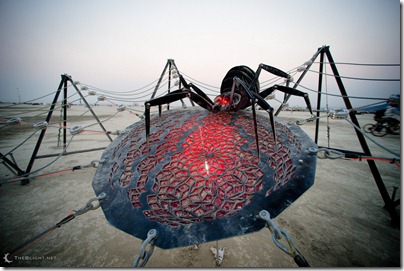 Congratulations, Kevin, on creating such a fantastic exhibit! :-)

photos from Kevin MacDonald and (for the last one) mr. nightshade (CC)