I’ve now finished my recent trio of long-haul trips: the San Francisco Bay Area in late April, Singapore in mid-May and Boston in early June. So I can take a breather for a few weeks (maybe even months), at least: I have no firm travel plans until AU, although no doubt something will come up before then.

[For those of you who aren’t familiar with it, the title of the post is a reference to a common British house name. In the UK people often name (or used to, anyway) their houses in this way to announce that they’re “Done Roaming – from now on I’ll stay here at home” (as explained in this description of Terry Pratchett’s meta-parody “Dunmanifestin”).]

During this last trip, in particular, there seemed to be a strong emphasis on upgrading my own use of travel-related technology. So this post is about that.

It started with my outbound travel to Boston. My aim was to go as paperless as possible, now that I finally have a smartphone worth its salt. I bought by rail ticket via the SBB mobile app – no paper ticket needed. I also checked in for my flight via the Swiss mobile app, so no paper boarding pass needed there, either. So far, so good.

I ended up getting a normal taxi from the airport – which I paid for with folding money and needed to collect a paper receipt for the eventual expense claim – but I later found out that Uber was available in Boston (thanks to Nick Zeeben for the tip :-). This would have gotten me all the way door-to-door without worrying about a single piece of paper, but hey.

I did end up using Uber a couple of times, during my stay in Boston: to get home after an outing to the Red Sox with colleagues and then to get to the airport on Wednesday night. I’d previously signed up for Uber during a trip to Paris, but I hadn’t actually ended up using it: the Boston promotion was the push I needed (and the service worked brilliantly, even with the additional demand caused by UBERx being free).

The other travel-related technology I ended up using was Zagster. For $15 per day I rented a bicycle from the hotel in Cambridge and used it to visit MIT, Harvard and downtown Boston. They provide you with a pin to unlock a compartment at the back of the bike that holds a key to the provided D-lock. All very clever. 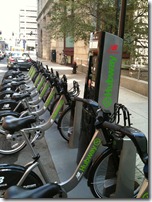 An alternative bicycle-sharing system in Boston is Hubway, which lets you pick up bikes and check them back in at locations all over the city. This can prove very cost-effective if you manage to time your trips to be less than 30 minutes between hubs, but I suspect I ended up being better off with Zagster for my particular usage pattern.