« Inserting a specific Excel sheet as an AutoCAD table using .NET | Main | 7 years (and a day) »

My apologies if you’ve reached this post while looking for a detailed comparison or analysis of these two products: this is just me sharing some anecdotal experience I’ve had of uploading – and working with – the same dataset in the two systems.

The subject I chose for this comparison is somewhat strange, as it’s notoriously hard to use photogrammetry to reconstruct 3D models from cars: they’re generally too shiny. But while this particular car has plenty of shiny, its main body of paintwork is a gorgeous matte silver, so I thought I’d take a chance with it.

I’ve talked before about Morgan Motors and their iconic Morgan 3 Wheeler. I’ve had the chance to snap a bunch (actually 75) pictures of the M3W Superdry Edition, and have uploaded the images via (the desktop version of) 123D Catch and into the currently-in-beta ReCap Photo. I used the stitching tools in each to manually stitch the photos that were not picked up automagically (which interestingly was a slightly different set on the two systems that both use the Photofly back-end service – presumably because ReCap Photo takes full resolution images rather than reduced resolution versions as 123D Catch does).

After working with it on and off for the last few years, I’m now pretty familiar with the stitching tools in 123D Catch. And I was pleasantly surprised with the capabilities provided by ReCap Photo: despite implementing a web-based UI, the ReCap Photo team has managed to provide functionality that generally goes beyond what’s available in 123D Catch. The stitching is straightforward to understand and use, and given the use of higher-resolution imagery the results are better, too.

Here’s a screenshot of the model as presented by 123D Catch: Here’s what was generated by ReCap Photo: 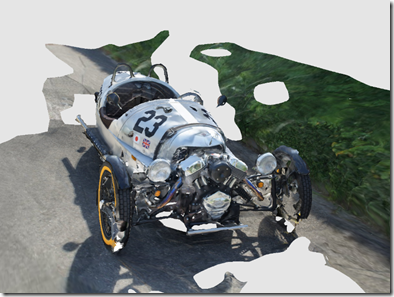 And from another angle:

The results I could get from ReCap Photo were generally much better that 123D Catch, which is completely logical, given the fact it’s a tool that’s targeted at the professional market which – as I mentioned earlier – works with higher resolution imagery. There are still a few quirks: I find that from time to time a stitch operation results in a 1-byte .RCP file, but I can typically get a prior version of the file working, so all’s not lost. The tool is still in Beta, so I’d expect these quirks to get ironed out in time for the official release.

One thing I’ve been reminded of, in general, when working with these two tools: manual stitching can be quite time consuming and a bit of a rabbit hole, especially when working with larger datasets and performing regular re-stitch operations. You end up having long waits to see the effects of a manual stitch, and consequently drink far too much coffee. Which tends not to help subsequent stitching efforts.

Again, a lot of this comes down to experience: if you take the right photos the first time around you can certainly avoid a lot of thrashing. And if you have access to the original model, it can be worth going back to it and taking a new (or incremental) set of photos, rather than spending too much time trying to shoe-horn your inadequate shots into a usable model. But it’s certainly worth persisting with the technology, as you can get some really nice results from it, with a little experience.